Why The Romney Campaign Might Want To Stay Away From The ”Better Off?” Question

Anybody else notice the clear absence of folks from the Bush years speaking at the GOP convention? A little secret: his foreign policy team has a lot of former Bush advisors on board, but he doesn’t want you to know that . . .

A Message About America That Will Probably Offend Some People (Because It’s True!)

Everyone is equal. But some people are just more equal than others.

Is The GOP All About Small Government?

How Can Something Be So Scary And So Hilarious All At The Same Time?

Cue the terrifyingly high-pitched strings music – – we don’t know whether to laugh or shudder at this ‘Psycho’ spoof.

Now This Is The Kind Of Town Hall Republicans Like

It’s almost as if they want to hand-select their audience. Oh, wait . . . 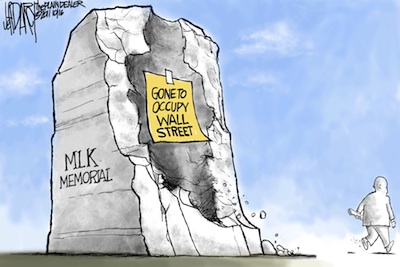 Do you think he’d join #OccupyWallStreet?

The Best Reason To #OccupyEverywhere

Where are the real criminals?

Now we see why gay marriage is illegal. Wait–no, actually, we still don’t.

Bonus if you can guess which ‘people’ he thinks should be taxed.

Would God Be A Republican Or Democrat?

Maybe we really should ‘Give It To God.’