The endorsements come as Republican presidential candidate Donald Trump continues to drag down incumbent Republicans and GOP hopefuls with his politics of hate, racism, misogyny, Islamophobia, and authoritarianism. 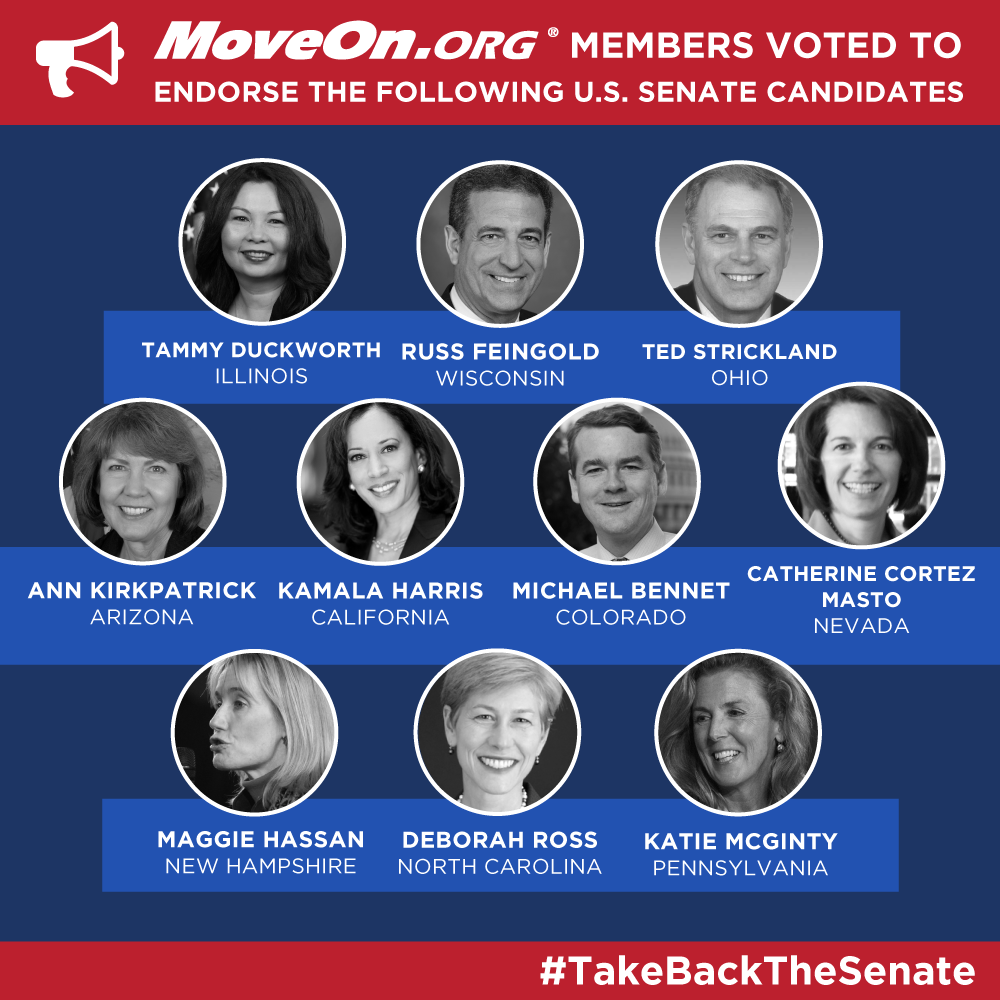 The endorsements are part of MoveOn’s United Against Hate campaign to defeat Donald Trump and the politics of racism, hatred, sexism and authoritarianism and elect a Democratic-controlled Senate this fall.

“MoveOn members are mobilizing nationwide to ensure Donald Trump never steps foot in the White House – and show that Americans clearly reject his politics of hate – while helping to elect Democrats who can advance progressive policies in Congress,” said Ilya Sheyman, executive director of MoveOn.org Political Action. “Bolstered by leading progressive voices like Senator Elizabeth Warren and Senator Bernie Sanders, MoveOn members will help take back the Senate this fall and continue to fight for progressive change at all levels of government.”

• Ann Kirkpatrick, 94% of votes cast by Arizona MoveOn members. Kirkpatrick is challenging Sen. John McCain, who has continued to say he will support Trump despite his relentless attacks against the Gold Star family of Humayun Khan, a U.S. soldier who died in Iraq. See more on this endorsement here.

• Michael Bennet, 64% of votes cast by Colorado MoveOn members. Bennet is an incumbent facing Republican challenger Darryl Glenn, who has continued to support Trump despite his and disrespect towards the family of a fallen soldier, a federal judge, and other minority groups across America. See more on this endorsement here.

• Maggie Hassan, 90% of votes cast by New Hampshire MoveOn members. Hassan is challenging Republican Sen. Kelly Ayotte, who continues to support Donald Trump despite being critical of his relentless attacks against the Gold Star family of Humayun Khan, a U.S. soldier who died in Iraq, and his proposed ban on Muslims entering the United States. See more on this endorsement here.

• Deborah Ross, 95% of votes cast by North Carolina MoveOn members. Ross is challenging Republican Sen. Richard Burr, who has continued to support Trump despite the presidential candidate’s repeated attacks on military families and comments Trump made in North Carolina that seemed to suggest violence toward Hillary Clinton, among other offensive attacks. See more on this endorsement here.

• Catherine Cortez Masto, 70% of votes cast by Nevada MoveOn members. Cortez Masto is running for the seat being vacated by retiring Sen. Harry Reid and would be the first Latino woman elected to the Senate. She faces Republican Joe Heck, who continues to support Trump despite the presidential candidate’s repeated attacks on military families, immigrants, and other minority groups. See more on this endorsement here.

• Katie McGinty, 94% of votes cast by Pennsylvania MoveOn members. McGinty is challenging Republican Sen. Pat Toomey, who has refused to say whether he’ll endorse Trump despite the presidential candidate’s repeated attacks on military families, immigrants, and other minority groups. See more on this endorsement here.