PENNSYLVANIA — Pennsylvania members of MoveOn.org Political Action have voted to endorse Katie McGinty in the state’s U.S. Senate race with 95% of votes cast in favor of backing McGinty as part of an effort to elect a Democratic majority in the upper chamber of Congress this fall. The endorsements come as Republican presidential candidate Donald Trump continues to drag down incumbent Republicans and GOP hopefuls with his politics of hate, racism, misogyny, Islamophobia, and authoritarianism.

McGinty is challenging Republican Sen. Pat Toomey, who has refused to say whether he’ll endorse Trump despite the presidential candidate’s repeated attacks on military families, immigrants, and other minority groups. Toomey received 5% of votes cast.

“MoveOn members are mobilizing nationwide to ensure Donald Trump never steps foot in the White House – and show that Americans clearly reject his politics of hate – while helping to elect Democrats like Katie McGinty and advance progressive policies,” said Ilya Sheyman, executive director of MoveOn.org Political Action. “Bolstered by leading progressive voices like Senator Elizabeth Warren and Senator Bernie Sanders, MoveOn members will help Take Back the Senate this fall and continue to fight for progressive change at all levels of government.”

MoveOn has more than 195,000 members in Pennsylvania.

Here’s what a few MoveOn members in the state had to say about McGinty:

“She supports reproductive choice for women; she is a champion for the Affordability Care Act, she’s an environmental advocate, has a good business sense, and very importantly she is a gun control advocate. Pennsylvania should have a female senator in Congress.” – Susan, Y. from State College, PA

“I believe this candidate better represents the needs and values of Pennsylvania residents and she will better champion them in the Senate.” – Robert R. from Pittsburgh, PA

“She’s a progressive, and she’s much better than the alternative. Democrats need this seat if we hope to retake the Senate.” – David S. from Pittsburgh, PA 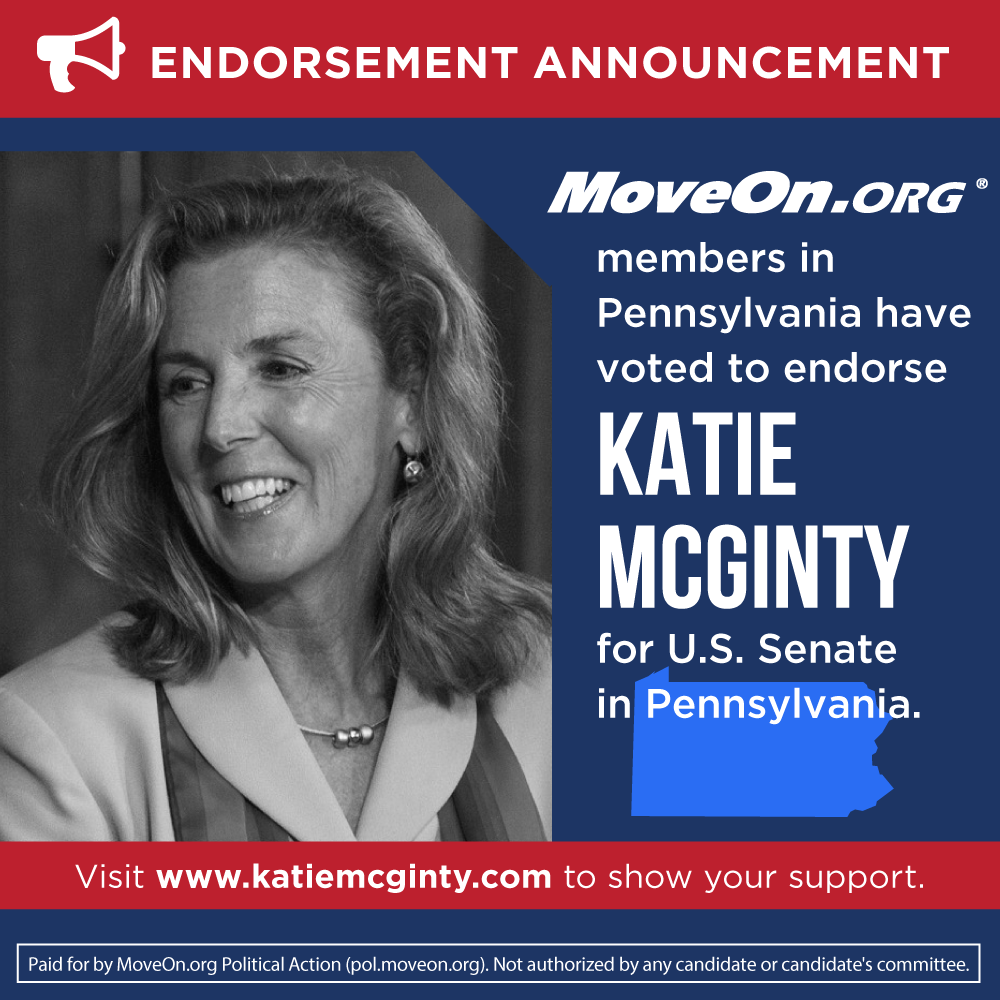