Colorado MoveOn Members Vote to Endorse Michael Bennet for Re-Election to U.S. Senate in National ‘Take Back the Senate’ Push As Trump Drags Down GOP Hopefuls

COLORADO — Colorado members of MoveOn.org Political Action have voted to endorse Michael Bennet for re-election in the state’s U.S. Senate race with 64% of votes cast in favor of backing Bannet as part of an effort to elect a Democratic majority in the upper chamber of Congress this fall. The endorsements come as Republican presidential candidate Donald Trump continues to drag down incumbent Republicans and GOP hopefuls with his politics of hate, racism, misogyny, Islamophobia, and authoritarianism.

Bennet is facing Republican challenger Darryl Glenn, who has continued to support Trump despite his and disrespect towards the family of a fallen soldier, a federal judge, and other minority groups across America. Green Party candidate Arn Menconi received 34% of votes cast; Republican Darryl Glenn, Libertarian Lily Tang Williams, and Unity Party’s Bill Hammons all received less than 1%.

“MoveOn members are mobilizing nationwide to ensure Donald Trump never steps foot in the White House – and show that Americans clearly reject his politics of hate – while helping to elect Democrats like Sen. Bennet and advance progressive policies,” said Ilya Sheyman, executive director of MoveOn.org Political Action. “Bolstered by leading progressive voices like Senator Elizabeth Warren and Senator Bernie Sanders, MoveOn members will help Take Back the Senate this fall and continue to fight for progressive change at all levels of government.”

Senator Bennet has served the interests of Coloradans well—standing up for farmers, the environment, education and fiscal responsibility. The policies that he has touted during his tenure as the Senator from Colorado, represent the progressive stance of an overwhelming majority of MoveOn members in the state.

MoveOn has more than 90,000 members in Colorado.

Here’s what a few MoveOn members in the state had to say about Bennet:

“[Senator Bennet is] more tuned into the environment and protesting the things that are destroying it.” – Marcia C. from Aspen, CO

“We need a Democratic majority in the Senate.” – Claire B.  from Greeley, CO

“He’s done good work. He is accessible. His staff is sharp and knowledgeable (both in D.C. and in Colorado). … I am a farmer in southwest Colorado and he seems to know what we need. And we sure will need him in the Senate on the Democratic side of the aisle.” – Chuck M. from Lewis, CO 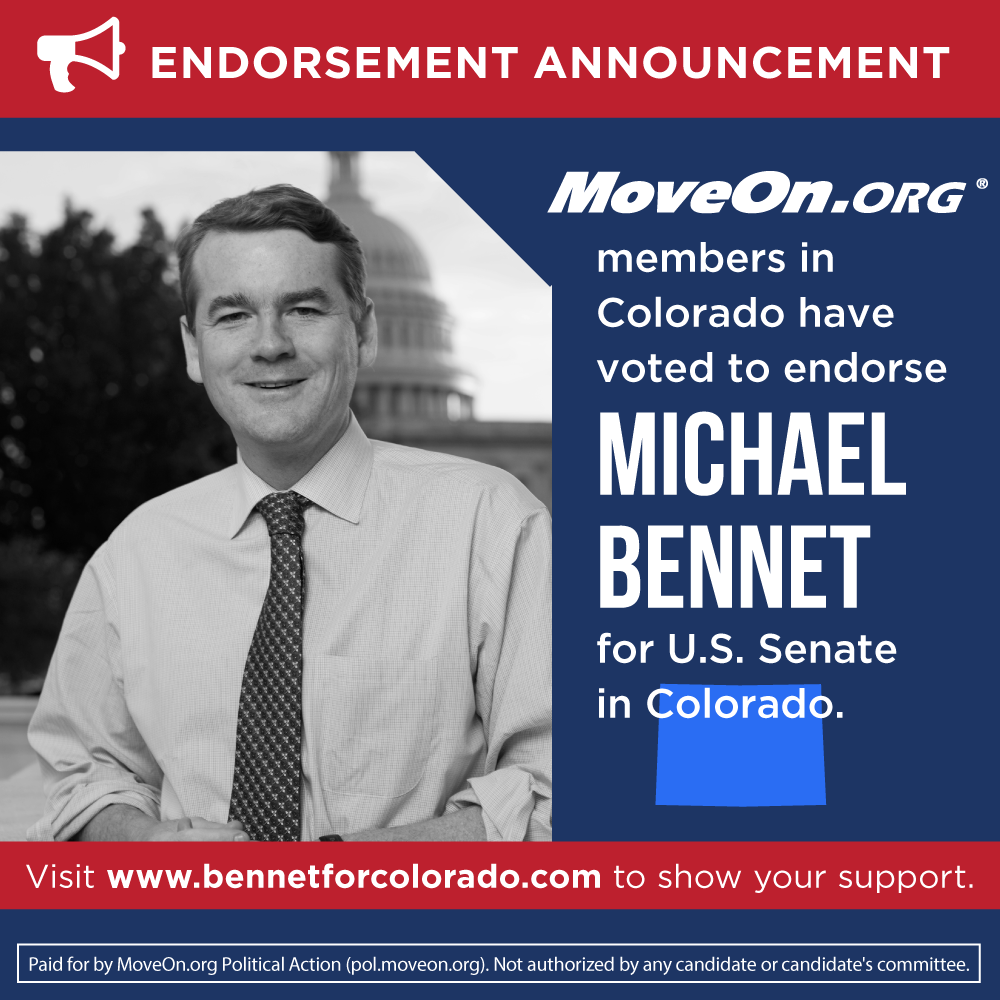