NEVADA — Nevada members of MoveOn.org Political Action have voted to endorse Catherine Cortez Masto in the state’s U.S. Senate race with 70% of votes cast in favor of backing Cortez Masto as part of an effort to elect a Democratic majority in the upper chamber of Congress this fall. The endorsements come as Republican presidential candidate Donald Trump continues to drag down incumbent Republicans and GOP hopefuls with his politics of hate, racism, misogyny, Islamophobia, and authoritarianism.

Cortez Masto is running for the seat being vacated by retiring Sen. Harry Reid and would be the first Latina elected to the Senate. She faces Republican Joe Heck, who continues to support Trump despite the presidential candidate’s repeated attacks on military families, immigrants, and other minority groups.

“MoveOn members are mobilizing nationwide to ensure Donald Trump never steps foot in the White House – and show that Americans clearly reject his politics of hate – while helping to elect Democrats like Catherine Cortez Masto and advance progressive policies,” said Ilya Sheyman, executive director of MoveOn.org Political Action. “Bolstered by leading progressive voices like Senator Elizabeth Warren and Senator Bernie Sanders, MoveOn members will help Take Back the Senate this fall and continue to fight for progressive change at all levels of government.”

Cortez Masto has spent her entire career in service to Nevada. She champions the progressive causes of immigration reform, labor, equal pay, protecting the environment, LGBTQ rights, women’s health and has come out firmly against Citizens United.

Here’s what a few MoveOn members in the state had to say about Cortez Masto:

“As Attorney General in Nevada, Catherine accomplished much and proved she has Nevadans interests at heart. She is a strong candidate who supports immigration reform, women’s reproductive rights, equal pay, increasing the minimum wage, and the LGBT community.” – Mary H. from Las Vegas, NV

“Catherine Cortez Masto cares about women’s issues and is against privatizing Social Security. She also has fought against big banks, and she believes in utilizing Nevada’s natural resources and stopping Big Oil. She also specifies on her website that she want to end discrimination against LGBT Americans, and it gives me faith that she recognizes how important an issue this is.” – Jillian G. from Henderson, NV

“She is qualified. she has political experience at the state level. She has worked cooperatively to make things work on a number of issues. she has sponsored bills that were aimed at the good of all and they have passed with bipartisan support.” – Margaret S. from Incline Village, NV 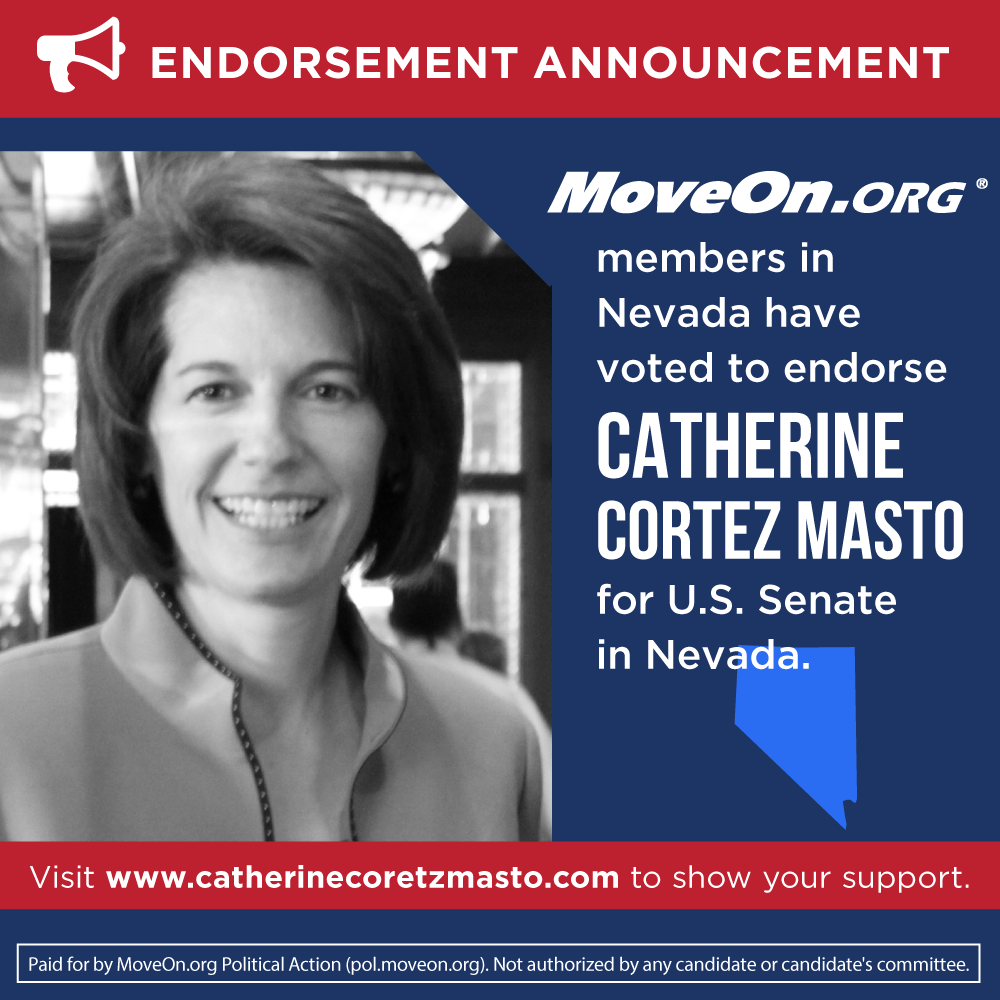 Nationwide, MoveOn members voted to launch a multi-million dollar United Against Hate campaign to stop Donald Trump and keep him out of the White House and ensure the country rejects his hateful and dangerous rhetoric.
MoveOn.org Political Action represents the collective will of MoveOn’s members at the ballot box by helping to elect progressive candidates.