NORTH CAROLINA — North Carolina members of MoveOn.org Political Action have voted to endorse Deborah Ross in the state’s U.S. Senate race with 95% of votes cast in favor of backing Ross as part of an effort to elect a Democratic majority in the upper chamber of Congress this fall. The endorsements come as Republican presidential candidate Donald Trump continues to drag down incumbent Republicans and GOP hopefuls with his politics of hate, racism, misogyny, Islamophobia, and authoritarianism.

Ross is challenging Republican Sen. Richard Burr, who has continued to support Trump despite the presidential candidate’s repeated attacks on military families and comments Trump made in North Carolina that seemed to suggest violence toward Hillary Clinton, among other offensive attacks. Recent polling from NBC News/Wall Street Journal/Marist now shows Burr sinking over the past month. Burr received 5% of votes cast; Libertarian candidate Sean Haugh received less than 1%.

“MoveOn members are mobilizing nationwide to ensure Donald Trump never steps foot in the White House – and show that Americans clearly reject his politics of hate – while helping to elect Democrats like Deborah Ross and advance progressive policies,” said Ilya Sheyman, executive director of MoveOn.org Political Action. “Bolstered by leading progressive voices like Senator Elizabeth Warren and Senator Bernie Sanders, MoveOn members will help Take Back the Senate this fall and continue to fight for progressive change at all levels of government.”

Ross supports good progressive values and aims to advocate for all in North Carolina — her issues include labor, education, energy environment and government reform. During her tenure in the North Carolina State House, Ross championed issues around public education, supporting small businesses and improving state infrastructure.

MoveOn has more than 140,000 members in North Carolina.

Here’s what a few MoveOn members in the state had to say about Ross:

“To the extent that North Carolina sees itself as a ‘purple’ state, it does so purely for economic reasons. Deborah Ross is more interested in the lives of the citizens a legislator’s choices impact, and less in being another rubber stamp for her party.” – Bernard J. from Durham, NC

“She is highly qualified and her policies represent a progressive agenda.” – Elizabeth H. from Lexington, NC 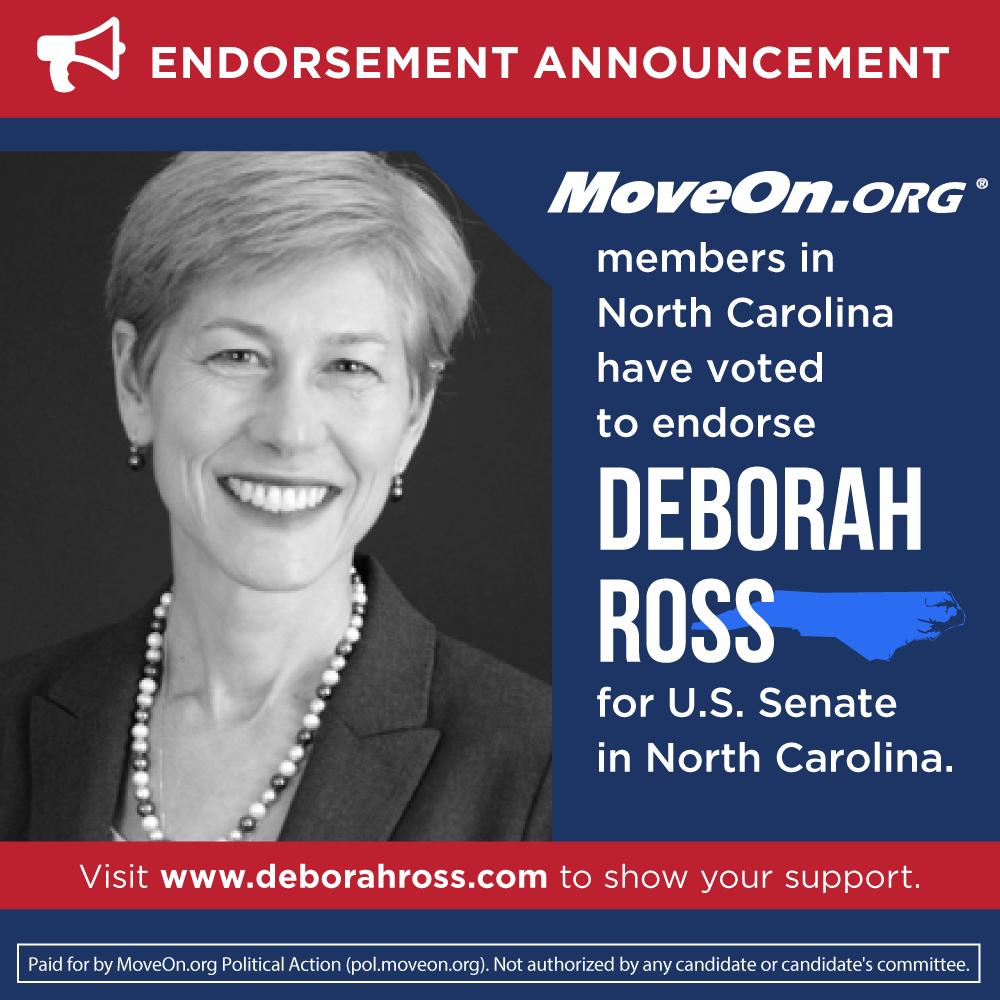