Over the weekend, thousands of Americans came together in Selma, Alabama to commemorate the 50th anniversary of Bloody Sunday. Fifty years ago, on Sunday, March 7, 1965, six hundred peaceful civil rights activists, led by now-Congressman, John Lewis, marched in protest of the shooting of Jimmie Lee Jackson by an Alabama state trooper.

Just short of the Edmund Pettus Bridge—named after a 19th century Grand Dragon of the Alabama Ku Klux Klan—the marchers were blocked by Alabama state troopers and local police, who ordered them to turn around. When the protesters refused, the officers responded with acts of terror—shooting tear gas into the crowd and beating the nonviolent protesters with billy clubs—fifty people had to be hospitalized.

The peaceful protest on that day 50 years ago, and the civil rights activism that followed, helped propel some of the most important civil rights advances of our time—including the Voting Rights Act. The phrase “Selma is now,” from the award-winning song “Glory” (made for the acclaimed movie “Selma”), has become a popular rallying cry of civil rights activists today.

And then there’s the places we don’t see those struggles, because we aren’t paying enough attention.

In 2013, the Supreme Court dealt a devastating blow to the Voting Rights Act—which President Reagan called the crown jewel of civil rights legislation—gutting a system that had been in place for 48 years. The law was not only written to end existing voter discrimination but also to stop new methods of disenfranchisement that might come in the future. It required jurisdictions with a history of voter discrimination to submit changes in their election rules to federal authorities for review—seems pretty reasonable, right?

Voter disenfranchisement continues in this country because the most important pieces of the Voting Rights Act don’t. 34 states have passed Republican-backed “Voter ID” laws, designed to keep minorities and the poor from exercising their right to vote. One such state is Texas. When Texas first passed a law to require voters to show a certain ID to vote, it was blocked under the Voting Rights Act. As soon as the Voting Rights Act’s pre-clearance procedure was overturned, the  new law went right back into effect—disenfranchising an estimated 600,000 Black and Latino Texas voters without the proper ID to vote.

I sat with pride as I watched my president, joined by lawmakers, civil rights activists, and my fellow Americans, march across the Edmund Pettus Bridge in Selma this weekend. It is so important that we honor the brave people who suffered and often died for us to have the equality that we do in this country today. But as long as the Voting Rights Act remains critically-wounded, we are not truly honoring those leaders. We have made great strides as a country, and we continue to, but we must not give up the fight. It’s up to us to call on Congress and demand that they make the necessary amendments to the Voting Rights Act to protect every American’s right to participate in our democracy, will you become a MoveOn member, if you’re not yet a member, and commit to being a part of the work ahead? 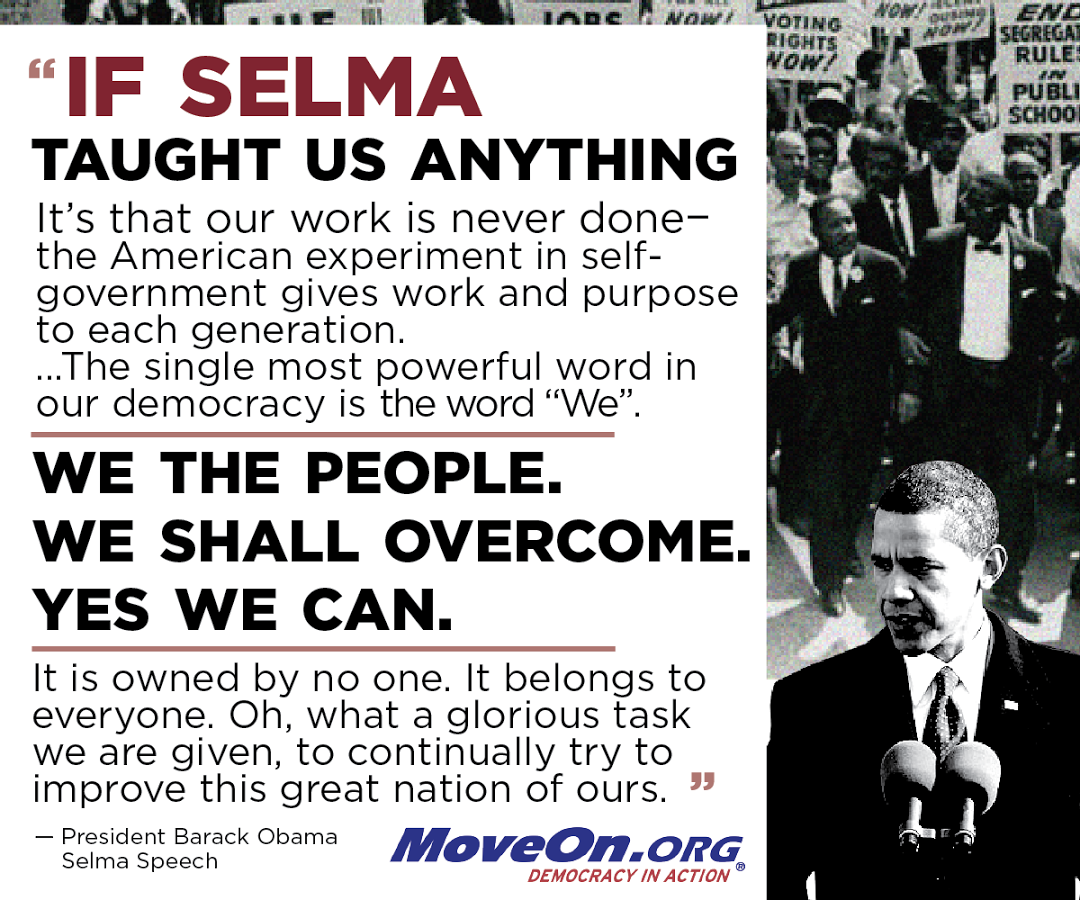