The organizers will work to mobilize thousands of MoveOn members in key states to urge members of Congress to stand for diplomacy over war.

MoveOn.org Civic Action has hired nine full-time “No War With Iran” Regional Field Organizers as part of a major, grassroots campaign to urge Democratic members of Congress to support the historic nuclear agreement with Iran. For two months, the organizers will recruit, train, and mobilize thousands of members in key states and districts in support of peace and diplomacy.

“I truly believe that keeping the Iran deal intact is crucial because for the previous decades, our policy of non-engagement with Iran has produced very little,” said Mark Cardenas, a field organizer and veteran who will be working with MoveOn members in Southern California, Arizona, Nevada, Texas, and Hawaii. “In the past year, our engagement with Cuba and Iran has been a refreshing change and I look forward to doing my part to help make the world safer.”

The organizers are coming off a training in Chicago and preparing for a National Day of Action on Wednesday, Aug. 26, in which nearly 200 in-district events have been planned by members of MoveOn and other allied progressive groups.

The “No War With Iran” Regional Field Organizers are:

MoveOn members have committed to defend this historic nuclear agreement and prevent war hawks from dragging the U.S. into another war of choice in the Middle East. Activists have showed up at dozens of August recess events to urge undecided Democrats to support the deal, and a recent donor strike has resulted in more than 100,000 members of MoveOn.org Political Action pledging to withhold over $30 million in donations from Democrats (and party committees supporting them) if they successfully undermine this historic deal.

“Nuclear weapons were my first political issue; every August throughout my childhood, my parents brought me to the Pentagon and White House to commemorate the dropping of atomic bombs on Hiroshima and Nagasaki and to call for an end to nuclear weapons,” said Cait De Mott Grady, a field organizer who will be working with MoveOn members in Michigan, Indiana, Ohio, Minnesota, and Western Pennsylvania. “Grappling with the threat of nuclear weapons as a child was no easy task, but the experience politicized me and instilled in me a profound sense of responsibility to work for peace and justice. I support the Iran deal because it represents a verifiable and concrete step on the road to a nuclear-free world. I’m excited to join the MoveOn team because I believe we cannot afford to let AIPAC and war-mongering politicians derail this historic agreement.”

Here’s a photo of the “No War With Iran” Regional Field Organizers during a training in Chicago: 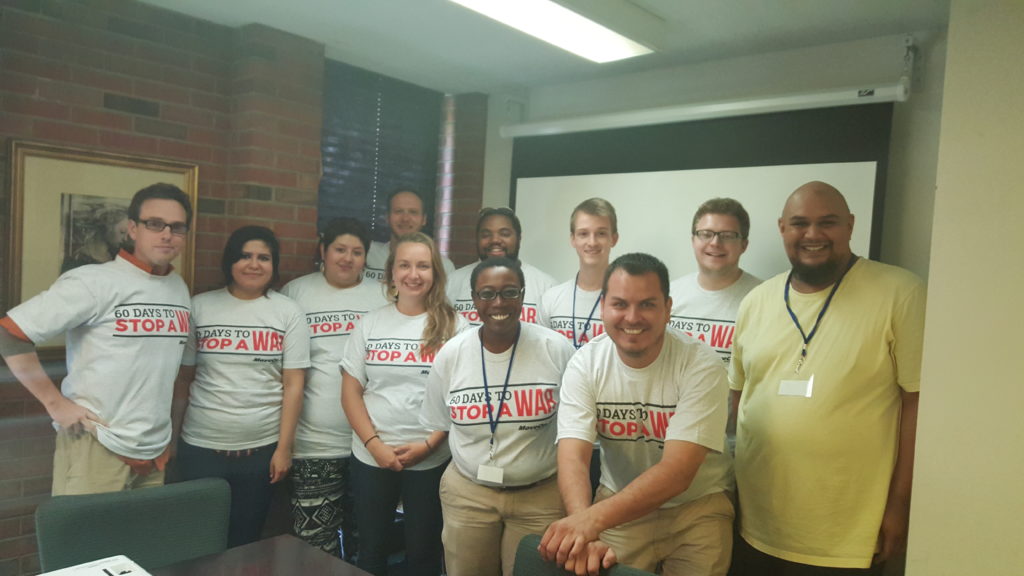