IOWA DEMOCRATIC LEADERS BACK RUN WARREN RUN. 18 more Democratic Party leaders across Iowa are signing on to a letter calling for Sen. Warren to run for president, in addition to the 16 leaders who have already signed on. Here’s what they say:

We need leaders who aren’t afraid to tell the truth, and fight back—no matter what powerful interests say—and we need all the candidates in the caucus to offer a bold vision for an economy that works for all Americans. Contested caucuses test and strengthen candidates and ensure progressives have a chance to make our voices heard. Having a real debate is what democracy is all about.

That’s why Americans from all walks of life have risen up to encourage Senator Elizabeth Warren to run for President.

See the full letter and list of signers here.

RUN WARREN RUN SUPPORTERS OUT IN FORCE AT IOWA WORKING FAMILIES SUMMIT. Iowans encouraging Sen. Warren to run for president gathered with Run Warren Run gear in Ames this weekend for the AFL-CIO’s Working Families Summit. Check out some photos from the gathering: 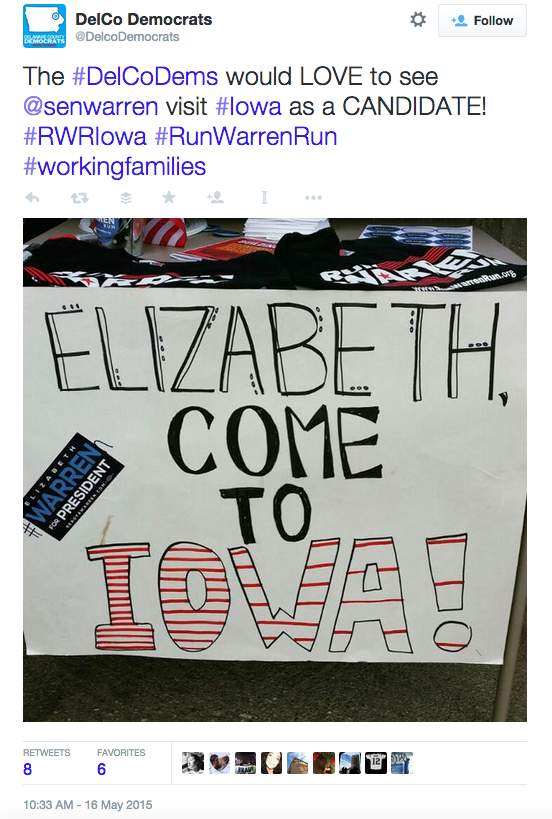 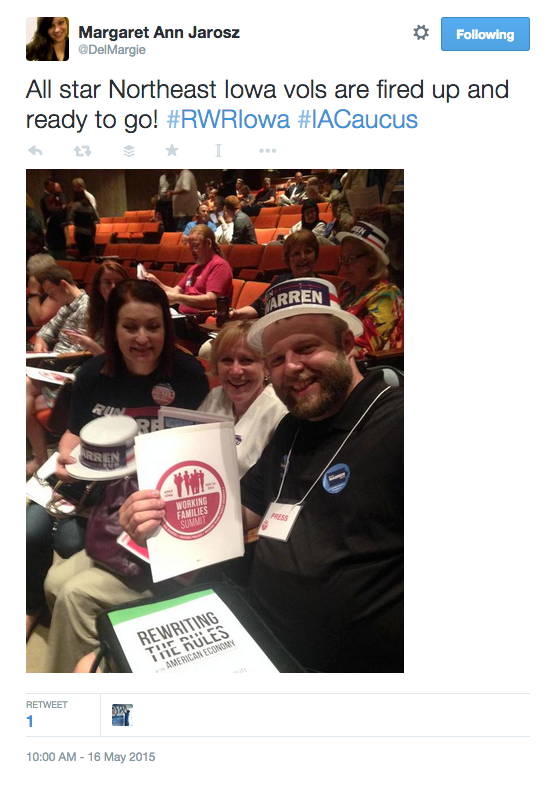 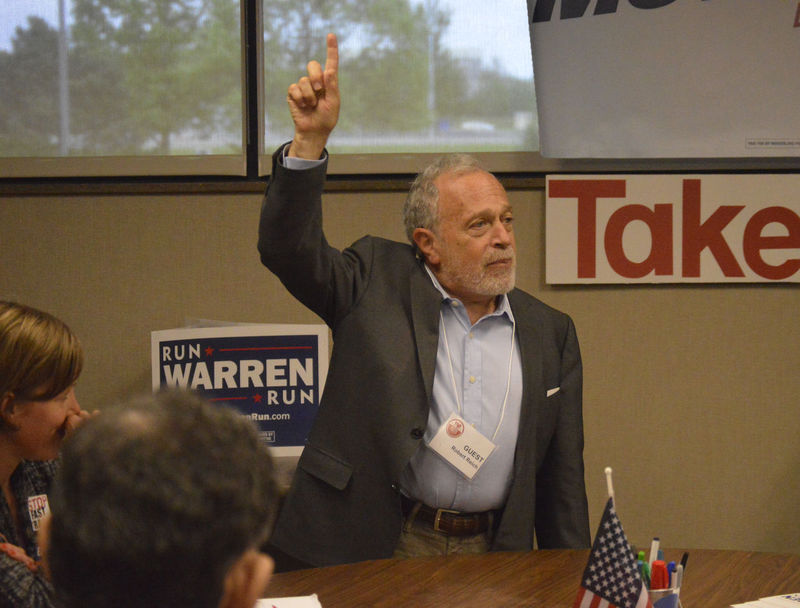 Former U.S. Secretary of Labor Robert Reich speaks to a group from MoveOn.org in the Scheman Building Saturday, May 16. Reich was the keynote speaker later in the day at the Working Families Summit. [Matthew Rezab/Iowa State Daily] 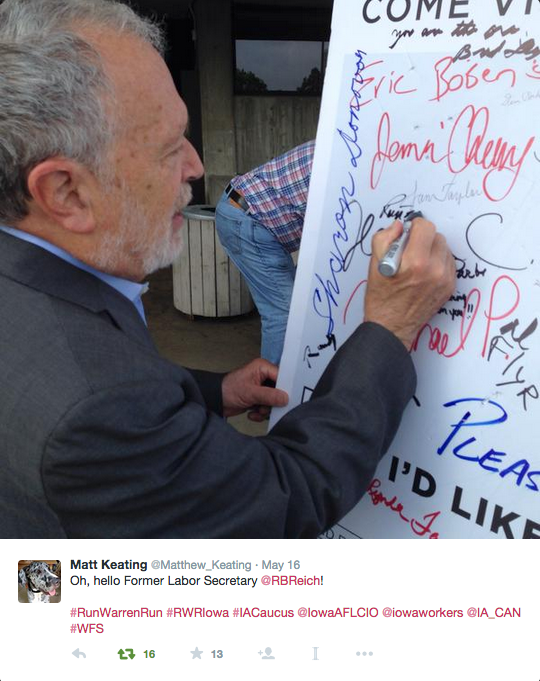 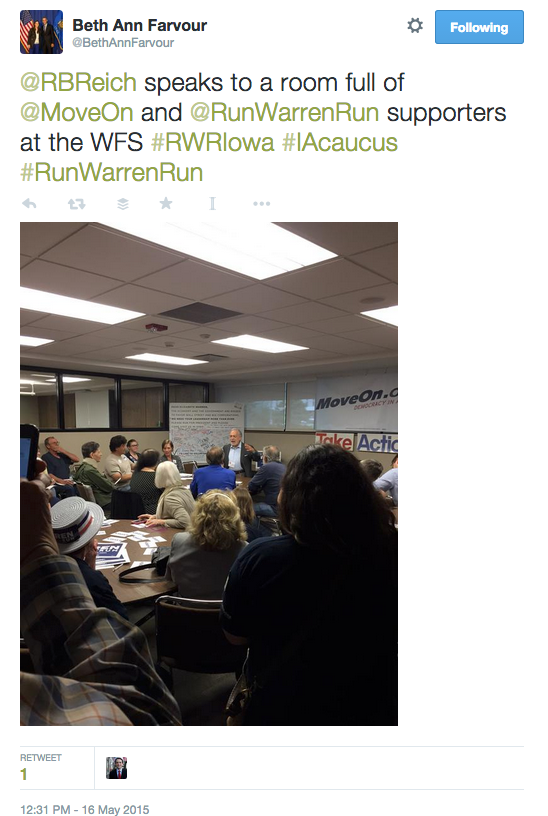 IOWA STUDENT’S LETTER TO THE EDITOR: “TIME FOR WARREN TO RUN.” Julia McKeekan, a graduating senior, writes in the Quad-City Times:

I know that in 2016 I want a candidate who understands my values as well as the country’s values. Sen. Elizabeth Warren understands that the system is rigged so that we can’t fulfill the American dream. She fights back against that system.

Read her letter to the editor here.

Sen. Elizabeth Warren delivered a tub-thumping speech to delegates at the California Democratic Party convention in Anaheim on Saturday, touching on the policy themes that have made her the increasingly popular champion of her party’s liberal wing…

“When we stand together, when we make it clear what we believe in, America is ready to stand with us,” Warren told the rapt crowd at the Anaheim Convention Center. “This isn’t just about politics. It’s about values.”

And Run Warren Run volunteers were there in force to greet Sen. Warren: 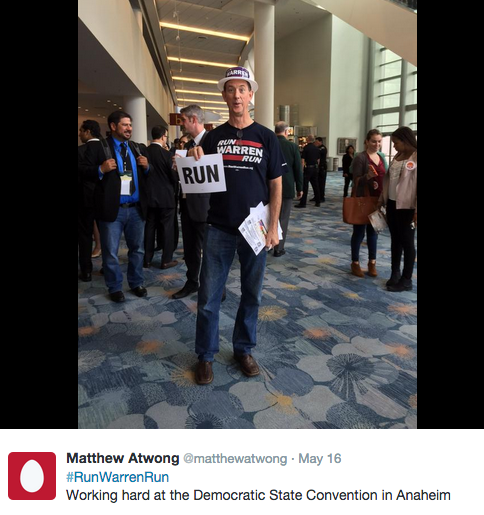 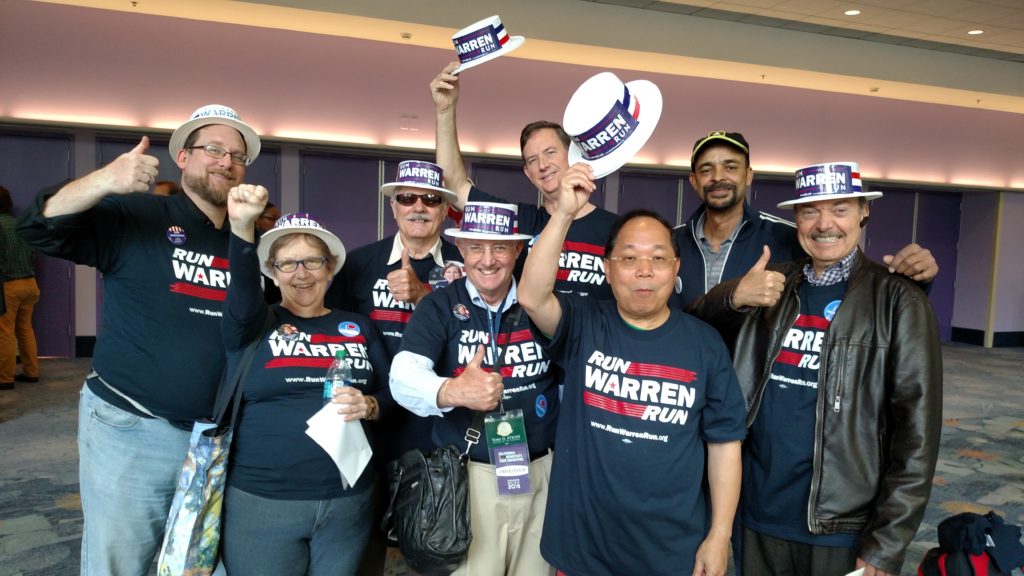 WARREN URGES OBAMA TO SUPPORT FIGHT FOR $15. In a letter sent to the White House on Friday, Sen. Warren, Sen. Bernie Sanders, and 16 other Senators ask President Obama to use his executive powers to support the Fight for $15 movement to raise the minimum wage to $15 an hour. Here’s what they write in the letter:

“Mr. President, the stroke of your pen can have transformative impact for millions of workers. As low-wage fast food, retail and federal contract workers continue to strike in growing numbers to ‘Fight for $15 and a Union,’ we urge you to harness the power of the presidency to help these workers achieve the American Dream.”

Read HuffPo’s Dave Jamieson on the letter and read the letter itself.

TPP FAST TRACK FACES STRUGGLE IN CONGRESS. The debate over Fast Track for the TPP continues in Congress this week, after the Senate initially rejected a bill giving Obama Fast Track authority before coming to an agreement on the bill two days later. One thing has been clear: Sen. Warren continues to lead in rallying opposition to Fast Track for the TPP, a massive deal that has been kept secret from the American public and has been likened to “NAFTA on steroids.”

Warren’s report undercuts an Obama public relations offensive that has repeatedly characterized TPP as “the most progressive trade deal in history.” The Senate is currently considering legislation that would grant Obama “fast track” authority, barring Congress from amending any trade pact he negotiates, including TPP. Liberals are concerned TPP will exacerbate income inequality and undermine key regulations.

But while much of the TPP controversy has concerned the legal language involved in the agreement itself, Warren’s report highlights a broader concern among progressives. Regardless of what the final TPP deal looks like, presidents Bill Clinton, George W. Bush and Obama himself, have all failed to effectively enforce promises to protect workers, even as rogue regimes have continued to benefit from other provisions of the agreements.

The Washington Post’s Paul Kane reports that Sen. Warren has turned the TPP into “the defining battle in the Democratic Party.”

On two fronts Warren appears to have won initial battles. The Senate on Tuesday ran into a filibuster of the Trade Promotion Authority measure that would grant Obama fast-track powers to pass global deals, as the overwhelming majority of Democrats blocked consideration of the legislation.

Also, Clinton has provided almost no cover for Obama on the trade issue even though she played a role in shaping the early stages of talks on the Trans-Pacific Partnership and has long claimed the “pivot to Asia” as one of her most prominent accomplishments as Obama’s first secretary of state.

WaPo’s Dana Milbank agrees that this movement has become a key moment for Sen. Warren:

Warren masterfully undermined the trade bill, by highlighting the administration’s obsessive secrecy (the details of the proposed agreement are classified) and the role of corporate interests in drafting the deal (500 non-government advisors participated, she said, 85 percent of them industry executives or lobbyists).

“And now this trade deal is getting the full court lobbying press from those same giant multinational corporations,” she said. “The middle class is on the ropes and now is the time to fight back.”…

Tuesday’s 44-to-1 vote against Obama’s position confirms that Warren’s populists now dominate the Democratic Party – and if Obama wants to retain a semblance of relevance, he’ll join them.

A coalition of Senate Democrats who’ve long opposed new trade agreements, led by Sherrod Brown of Ohio, say they are planning to throw up procedural roadblocks and offer amendments that would expand worker protections and undermine GOP support for the fast-track measure. While they can’t win the battle, Brown and his allies hope their resistance will stoke popular sentiment against the bill and encourage Democrats to vote against it in the House, where Republican leaders warn they still need about 20 more votes for approval.

“The handwriting’s on the wall,” Brown said of the prospects of beating the bill in the Senate. But, he said: “there’s real opportunity in the House to defeat it.”

Bloomberg’s Mike Dorning talks with several legal experts and finds they agree with Sen. Warren’s claims that the TPP could impact Dodd-Frank:

The Massachusetts senator has warned fellow Democrats that a fast-track trade bill now in Congress could undo U.S. laws such as the Dodd-Frank banking regulations later. A number of constitutional scholars and other legal experts say she’s right.

The reason: An arcane trade-bill provision that would make it easier for a future president and Congress to undercut existing statutes, even ones with little to do with trade.

The risk to Dodd-Frank is “real and meaningful and worth worrying about,” said Michael Barr, Obama’s former assistant Treasury secretary for financial institutions and an architect of the financial law. Barr said a hostile president might weaken the law through other means, such as a legislative assault or regulatory maneuvers.

RUSS FEINGOLD SIDES WITH WARREN AGAINST TPP. Russ Feingold—just days after announcing he would run for Senate in Wisconsin, looking to secure back his seat after losing it in the Tea Party wave of 2010—told the state’s WISC-TV that he would oppose the TPP.

“The economy has definitely been improving, and things like the stock market are doing better,” Feingold said. “But the economy has to be good for working-class and middle-class families who work every day, send their kids to a school like is in front of my house, and they have to be able to enjoy their lives. That’s why you don’t pass a trade agreement that ships even more jobs overseas.”

The party’s leading thinkers, you see, want to talk about economic inequality, and have wanted to for some time. But polls and focus groups consistently show that the public is more interested in questions of opportunity and mobility than in questions of distribution per se….

An economy full of opportunity just is an economy in which the fruits of economic growth are shared more equally….

What Warren does differently is pitch this as an agenda for economic growth rather than social justice. Or, rather, to argue that they are one and the same.

WARREN’S ‘ALLY ON THE INSIDE’ OF THE SEC. Politico’s Patrick Temple-West profiles Kara Stein, the junior Democrat on the Securities and Exchange Commission, who is “quickly become one of its more ruthless enforcers, making trouble for Wall Street, and aligning herself with Warren’s views as part of a powerful regulator that polices the financial industry.”

“Kara Stein has worked on securities law and reform issues for years and she really knows her stuff. I’m very pleased that her strong, independent voice is now at the SEC,” Warren said in a statement.

Stein’s work has even drawn attention from MoveOn.org, which is continuing to prod Warren to run for president despite Warren’s insistence that she won’t.

ICYMI: ROBERT REICH TAKES ON SOCIAL SECURITY. Watch former Labor Secretary Robert Reich talk about why we should expand Social Security, not cut it, in the latest of his “Big Picture” video series from MoveOn.

AlterNet’s Adam Johnson says Reich “eviscerates right wing-lies on social security” with “a series of pretty cool explainer videos that do a great job breaking down why so much of our economic conventional wisdom is wrong.”