“I definitely feel that we need a primary. It would bring out passions and a desire to vote,” Williams told the Register Wednesday. “I think it’s extremely important. … If we’re all talking amongst Democrats, we’ll get some substance out of this discussion. … I like way the way [Elizabeth Warren] can say what she thinks. I feel like she’s talking right to me, to what’s in my head.”

Jacobs also noted the growing momentum of the Run Warren Run movement in Iowa—including having signed up supporters in all 99 Iowa counties, holding 75 Run Warren Run events since launching in December, hiring a team of field and campus organizers, and opening offices in both Des Moines and Cedar Rapids.

It is the latest move in an effort that has also seen the opening of grassroots organizing offices in New Hampshire and Iowa.

Although Warren has said she does not intend to run, Cushing said there is a need for a “robust primary debate.”

“We’re urging Senator Elizabeth Warren to join the 2016 race for president, because we know, first hand, how important a robust primary debate of our progressive values is to New Hampshire voters,” Cushing said. “The Granite State’s grassroots activists, the same friends and neighbors who knocked on doors and made phone calls to send us to Concord, want hear from Senator Warren in 2016, so we’re standing up to make sure their voices are heard.” 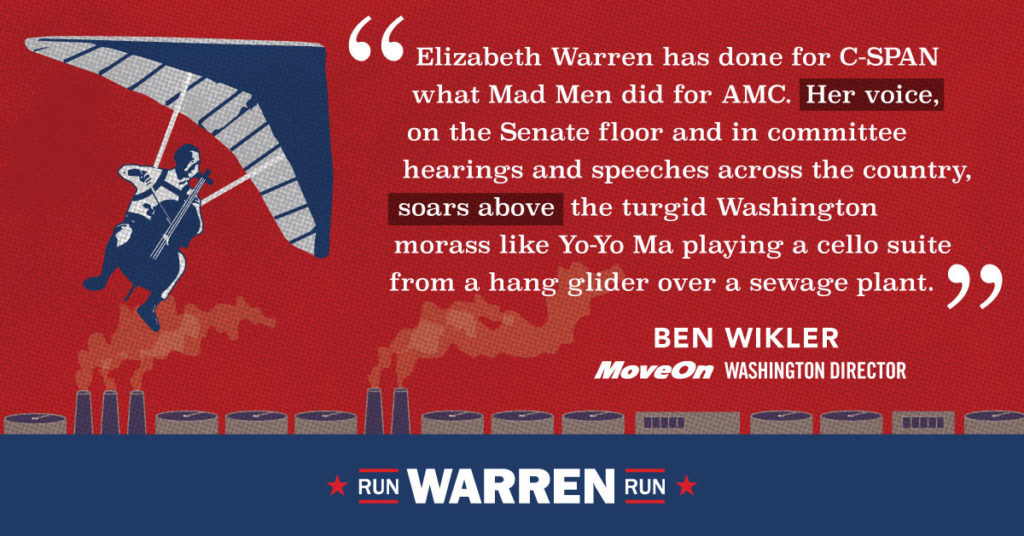 MOVEON: ‘YES, WE NEED ELIZABETH WARREN IN THE SENATE. AND SHE SHOULD ALSO RUN FOR PRESIDENT.’ MoveOn Washington Director Ben Wikler responds to arguments that Sen. Elizabeth Warren should avoid running for president because of her powerful role in the Senate in a must-read piece in Huffington Post Politics. Here’s more from Ben:

It’s an understandable sentiment: She’s an electrifying, awesome senator. Elizabeth Warren has done for C-SPAN what Mad Men did for AMC. Her voice, on the Senate floor and in committee hearings and speeches across the country, soars above the turgid Washington morass like Yo-Yo Ma playing a cello suite from a hang glider over a sewage plant.

What’s more, she gets things done. When she sees common ground, she reaches across the aisle to pass legislation; for example, the Smart Savings Act, introduced by Warren and Rob Portman (R-OH), passed through the Senate unanimously last December. And when no common ground can be found, or the price of compromise is simply too high, Warren stands firm, takes her argument to the public — and, on issues from student loans to Wall Street regulation to the TPP, transforms the debate.

So, yes: We do need her in the Senate! Please don’t leave the Senate, Elizabeth Warren!

But here’s the thing: You don’t need to leave the Senate to run for president.

Let’s game this out.

‘VOICEMAILS FOR WARREN’ FEATURES AUDIO MESSAGES FROM AMERICANS URGING WARREN TO RUN. A new project from Run Warren Run, Voicemails for Warren, features messages from supporters across the country calling on Sen. Warren to enter the race.

They’re compelling, powerful audio stories from people who are ready to stand behind Sen. Warren should she enter the race. More than 500 Americans left voicemail messages for Sen. Warren through this effort recently.

Listen to a collection of Voicemails for Warren here: http://ow.ly/KsDYy

Don’t miss Christine, a mother of four from Missouri, who says Warren is an inspiration to her children and notes there are lots of people “just like her who would love you to run, who would work for you.” Or Laurie from Minnesota, who says she hasn’t been as passionate about a potential president since the late Sen. Paul Wellstone.

See more on the ‘Voicemails for Warren’ video on Al-Jazeera America.

BOSTON CONSTITUENTS CALL ON WARREN TO RUN. A new Run Warren Run video featuring comments from Boston-area residents went live on Thursday—on the side of a building near the Harvard University campus in Cambridge, where Sen. Warren was a law professor. Check out a photo from the projection below: 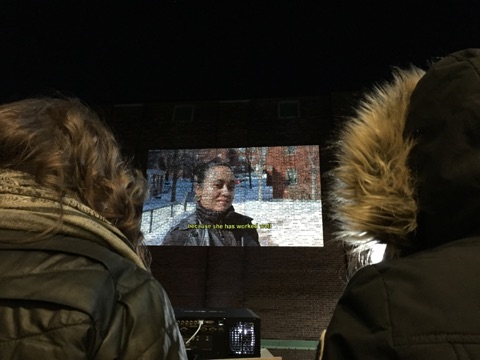 WARREN RE-INTRODUCES STUDENT LOAN REFINANCING BILL. On Wednesday, Sen. Warren re-introduced her “Bank on Students Act” to allow borrowers to refinance their student loans. “A problem that was bad a year ago got worse. Since last year, nearly a million more borrowers have fallen behind on their payments. They are watching their loan balances get bigger, not smaller,” Senator Warren told MassLive’s Robert Rizzuto in a phone interview from her Washington office on Wednesday. “We’re back with this bill because we have to refinance student loans. Students are now struggling with $100 billion more in debt that a year ago. There’s a total of $1.3 trillion in student loan debt that is crushing people, and the government continues to make obscene profits off these loans.”

FROM IRISH DOGS TO 9-YEAR-OLD ORGANIZERS. The Run Warren Run Iowa team is working around the clock to amplify the groundswell of support for Sen. Warren across the state—and they’re tweeting as they go! Follow #RWRIowa to stay updated with what’s happening on the ground as our field organizers drop into off-year caucuses, campus organizers sign up student volunteers, and 9-year-old Action Leader Evie leads the #KidsForWarren push: