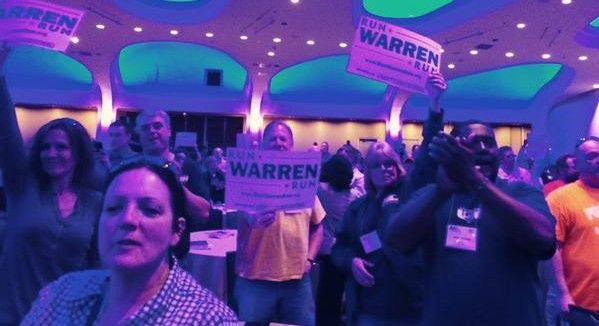 On Monday, Senator Elizabeth Warren keynoted the Good Job, Green Jobs conference in Washington, D.C., delivering a speech that reaffirmed her as the economic champion that we know her to be. Senator Warren told an audience of more than 500 people, “The rich and the powerful have rigged the game. They fight for an America that works for them and leaves everyone else behind.”

She was met with huge cheers from the audience—many of whom were holding Run Warren Run signs. It’s not news that environment activists are excited about Elizabeth Warren. This week Ready for Warren—who is also working to draft Senator Warren into the presidential race—revealed that 1,000 environmental activists have signed on to participate in the draft effort. The volunteers represent employees, donors, and volunteers for some of the biggest green groups in the country including the Sierra Club, League of Conservation Voters, and Environmental Defense Fund, along with progressive organizations such as 350.org, Friends of the Earth, and Greenpeace USA.

Elizabeth Warren explained that regulations do more than simply fix an unjust economic system, she also explained how regulations can also ensure sustainability and environmental coscieness consciousness saying, “A lot of people think that regulations bring higher costs, but regulation is also about making sure that someone doesn’t get to beat out the competition because they’re dumping filth in the river or spewing poisons in the air.”

Senator Warren’s speech was an inspiring one for sure, be sure to check out the entire thing for yourself.

You can you watch Elizabeth Warren’s entire speech below: