WHOA: Tagg Romney Caught On Tape Saying He Wanted To Take A Swing At The President

What don’t they understand about this man being their president? This needs to be shared! LISTEN:

Transcript:
RADIO HOST: I’m gonna ask something I know a lot of people want to know, or at least I do. What it is like for you to hear the President of the United States call your dad a liar. How do you react to that?

TAGG ROMNEY: Uh, you know, uh, well, jump out of your seat, and you want to rush down there to the debate stage and take a swing at him. But you know you can’t do that, because um, well first because there’s a lot of Secret Service between you and him…”

Which begs the question, does the apple fall far from the tree?

Here’s what MoveOn.org’s PAC Executive Director, Justin Ruben, said in May about how Mitt Romney’s bullying behavior is relevant to the election.

by Justin Ruben, Executive Director of MoveOn.org Political Action.
Five high school seniors at an elite prep school stalk, then jump a younger student with a new haircut they think looks too gay. Their 18-year-old ringleader cuts off the offending locks, while the victim screams and begs for help. Decades later, the victim and several participants are still haunted by the attack.

It’s not a scene from Bully. It’s a revealing episode from Mitt Romney’s formative years.

We’ve all had moments in high school or college we’d rather forget. And certainly we all have the capacity to change. But sometimes behavior as a young adult can reveal much about one’s present character. Romney’s challenge is that his prep school bullying lines up well with the rest of what voters have learned about him.

Here’s the simple picture that’s emerging: If you’re less fortunate or less powerful, Mitt Romney won’t think twice about walking over you if you’re in his way. 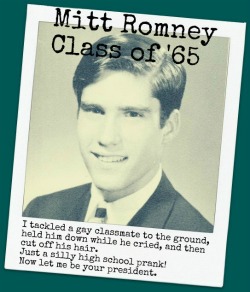 Mitt was born into a stratum of society that most Americans know only from movies and magazines. And maybe because of that, he often appears not to understand or care about people weaker than him — even when they’re harmed by his actions. If you’re a member of the jet set, or if you’re useful to him financially or politically, he’s got your back. But if you’re not as powerful you may be as good as invisible, or worse — like his classmate John Lauber — someone he’ll tear down in order to lift himself up.

Romney made his millions in large part by laying off tens of thousands of people. So when he says, “I like to fire people,” well, what would you expect from the silver-spoon bully who, according to one classmate, turned a prestigious prep school into something akin to Lord of the Flies? At a time when many Americans fear for their own financial future, it’s no surprise many wonder if they’re also on Romney’s chopping block.

Even the bizarre episode with Seamus, the family dog who spent 12 hours strapped to the roof of the Romney car, fits the pattern. Mitt Romney seems to have a serious empathy problem.

Now we’re seeing parallels as Romney lays out his policy agenda for the country. The man who rallied his chums to bully a vulnerable kid has produced a set of prescriptions that are striking in the degree to which they advantage his NASCAR-owning buddies over everyone else.

According to a recent CBS News report, Romney’s tax plan “strongly favors the rich.” While cutting taxes for his fellow millionaires, he’d actually raise taxes on the bottom 20 percent of earners. Of course this is the same Romney who earlier this spring said, “I’m not concerned about the very poor,” as though existing antipoverty programs are sufficient.

Or consider how his policies would harm women. Romney would allow bosses to deny birth control coverage to their employees. He’d overturn health care reform, including a provision to stop insurers from billing women more than men for the same coverage. And he wants to “get rid” of funding for Planned Parenthood — a lifesaving source of health care for millions.

None of these would pose much difficulty for Romney or his privileged friends. But if you’re a woman who needs health care, in Romney’s world, you could be out of luck.

Same goes for the low-income students who rely on Pell Grants as they pursue a higher education and the American Dream. They’d see cuts of up to $170 billion under the Ryan budget Romney has embraced — which could put college out of reach.

And if you’re gay? Romney’s bullying prep school behavior was just the start of it. Before a recent Fox News interview, Romney struck a mock effeminate tone as he considered a pink tie — a nasty jab gay people anywhere would be quick to recognize. Again, there’s a policy connection. Romney wants to end marriage equality in the six states that have it. No “evolution” here.

After the Washington Post broke the bullying story, Romney apologized for his high school “pranks and hijinks.” He took pains to explain that it’s been a long time since prep school, and that he’s changed.

The problem for voters hunting for a leader who cares about their problems and will take their side, is that it doesn’t appear he has.

Audio found on The PoliticalCarnival.net. Originally submitted by Marika S.

Publishing of this page paid for by MoveOn.org Political Action.