First, let’s get the horrible news—which you probably already know—out of the way: Republicans are taking control of another branch of the government, getting ready to unleash a wave of reactionary politics on the country, trigger more shutdowns, and hurt our chances of getting anyone good confirmed to the Supreme Court for years. That’s just a start. And it’s real. Losing is a punch in the gut.

But the important question is: What do we do now?

Do we sulk? Sit on our hands? Retreat?

The elections last night were a setback—but we’ve been here before. We’ve been in far worse places before. Now is the time to get back up and get ready to fight for our progressive values.

We chose to fight against the expected tide of history because we knew it was important. Because people’s lives were—and are—on the line.

And yes, we lost. But we built something real and powerful that won’t disappear with Election Day.

Together, we mounted a truly moving, inspiring, impressive effort. Volunteers made more than 6.75 million calls to voters—and thousands of progressives, many of whom had never volunteered before, took action together. We showed what we as a community can do.

Together, we helped progressive Senate champions Al Franken and Jeff Merkley win big victories. And voters approved ballot measures to raise the minimum wage in all four states where it was on the ballot; legalized marijuana in a number of places; and rejected measures that would have taken away a woman’s right to choose—even in states where they voted for a Republican senator.

So while Democrats lost in many places, it’s clear the Republican Party does NOT have a mandate to enact a right-wing agenda. There’s a hunger in the country for a bold, progressive vision.

We need populist, fierce, progressive champions to feed that hunger and take back the conversation in America. And together, we’ll organize to make that happen.

We need to give no quarter to Republican extremists. Democrats in Washington need to stand strong, and fight for what we believe in. In the weeks and months ahead, that’s exactly what MoveOn members will lead the way in demanding—from lawmakers and the president.

To do all this in the days and months ahead, we need you with us. There really isn’t a moment to lose. So take (a little) time to grieve, reflect, and recharge if you need it. But then let’s get back to action. Please don’t lose hope. And never, never, never give up. We’re in this together. 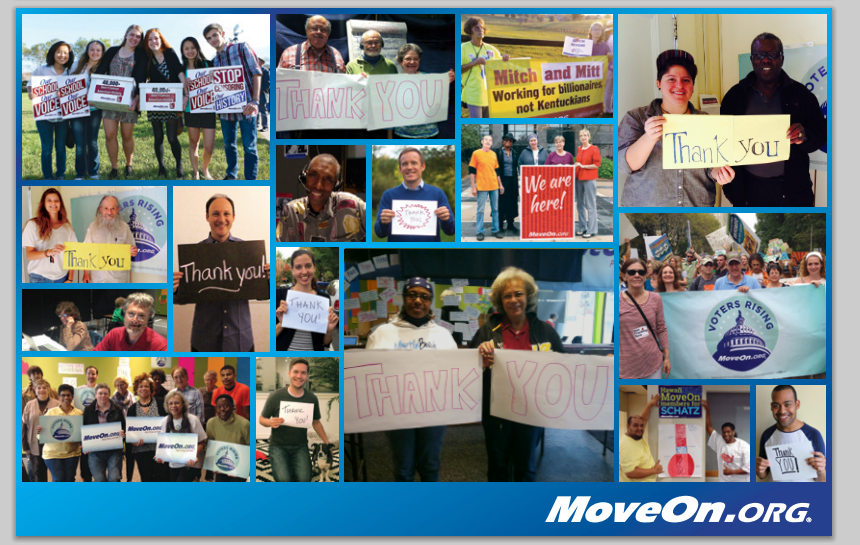 P.S. If you’re feeling too depressed right now to get right back in the fight, we get it. But if you’re ready to get back to work, let’s not waste one second. So how about it? Will you become a monthly donor today—and help us get to work?

I can’t make a monthly donation right now, but I’ll donate one time instead.