Good morning, and happy morning-after! In just 12 hours since President Obama wrapped his 2015 State of the Union address, there’s undeniable energy around the bold, progressive ideas he put forth—and a consensus that progressive activists and elected leaders like Sen. Elizabeth Warren helped paved the way for the President’s bold approach.

ROTHENBERG IN ROLL CALL: WARREN ‘PLAYS BEST TO DEMOCRATIC SYMPATHIES.’ Writing this morning in ​Roll Call, Stuart Rothenberg argues that Elizabeth Warren still has time to enter the race and would make a strong candidate.

No point in speculating about a Warren candidacy anymore, you think? Yes, the Massachusetts Democrat has said that she isn’t running a number of times, most recently in a Fortune interview. Why not simply take her at her word?

But I’ve been following politics far too long to believe every statement made today guarantees behavior a few months down the road. Circumstances change, and politicians change their minds.

Not long ago, Mitt Romney and wife Ann ruled out another White House run in 2016 in no uncertain terms. And yet, the 2012 GOP nominee has changed his mind and is looking seriously at another run.

I recall talking with a staffer of then-Sen. Barack Obama about the very early chatter (shortly after his election to the Senate) that he should run for the Democratic nomination for president in 2008. The staffer laughed at the suggestion, dismissing it out of hand.

Indeed, less than a week after he was elected to the Senate, Obama told “Meet the Press” host Tim Russert he “absolutely” would serve out his full six-year Senate term.

Obama had no intention of running in 2008 until supporters and allies persuaded him that though the timing was not ideal, he might never have a better opportunity to run and win.

Warren reflects the views of most in her party who distrust anyone in corporate America and want to give voice to the less affluent. She comes across as extremely genuine and caring.

NEW OP-ED FROM MOVEON’S BEN WIKLER: ‘WHY OBAMA’S STATE OF THE UNION WAS A TRIUMPH FOR ELIZABETH WARREN, TOO.’ MoveOn’s Washington Director Ben Wikler writes in the Huffington Post that Sen. Elizabeth Warren’s “message and … happy-warrior political style are shifting the national debate in a more progressive direction” and reframed the debate around the fundamental economic issues facing middle-class and working Americans:

So what put this progressive spring in the president’s step?

We’ll all hear a lot of punditry on that question over the next few days: maybe the president and his team feel liberated from the constraints of elections now that the 2014 midterms are over. Maybe he’s finally showing his true colors. Or maybe he simply recognizes that inequality in our economy is a fundamental challenge for our country, and wants to do something about it.

All of those are probably part of the answer. But I’d like to offer another factor: Elizabeth Warren — and the progressive movement that’s been fighting alongside her.

Both in substance and style, President Obama’s State of the Union address echoed the voice of the senior senator from Massachusetts — and the vision that she has championed since before she took office.

MOVEON STATEMENT ON SOTU SPEECH. MoveOn’s Anna Galland responded to the President’s address last night, calling it a “remarkable reminder of why so many progressives worked so hard to elect President Obama in 2008 and again in 2012.” Here’s the full statement.

RT BuzzFeed Politics (@BuzzFeedPol): .@MoveOn: tonight’s #SOTU proves that “Elizabeth Warren [has] helped drive the need to address inequality to the forefront of the agenda.”

KATRINA VANDEN HEUVEL ON THE IMPORTANCE OF CONTESTED PRIMARIES. Writing in The Washington Post, Katrina vanden Heuvel discusses the importance of contested primaries in making candidates stronger and calls horserace coverage a disservice to voting Americans.

A primary challenge — whether Sanders or Webb or Warren — is vital simply to begin to force a serious argument about the country’s direction and to let voters and activists understand that there are alternatives. Warren, as well as Sen. Sherrod Brown and other progressives in the Senate, have begun to frame some of these issues. The AFL-CIO and other progressive groups have begun to frame a bold agenda for 2016 and beyond and will push to get candidates to react to it. A primary battle in which activist support is important will greatly strengthen that effort.

RICK KLEIN ANALYSIS: President Obama’s Legacy Turn: From Yes We Can to Yes We Did

It all feeds into the big turn — from “yes we can” to “yes we did.” Looking ahead, he’s going even bigger, steering toward a brand of economic populism that’s familiar to anyone who’s been watching Sen. Elizabeth Warren closely.

What his speech does, though, is put the president in the middle of a major debate that’s coursing through American politics, one that will play out inside of both parties through the next presidential election.

The debate concerns a middle class that feels left behind in the current recovery. For Democrats, as voiced most prominently by Warren — whose smile seemed particularly broad Tuesday night — it’s a piece of unfinished business around income inequality that sparks frustration, and even anger from some corners.

Dan Schnur, former McCain communications director, in The Wall Street Journal: ‘The 2015 State of the Union Address … Brought to You By Elizabeth Warren’

But the speech that Barack Obama delivers Tuesday night would not exist if it were not for Sen. Warren and her increasingly effective efforts to drive a more progressive and populist Democratic Party agenda. Regardless of whether you agree with her prescribed remedies, Sen. Warren has provided a legislative and intellectual framework for the guttural cry that was the Occupy Wall Street demonstrations a few years back. Without a specific and tangible set of policy proposals, the Occupy-ers were not able to shift from being simply a large group of angry people into a cohesive political movement.

Obama’s tweak of the pipeline focus mirrors that of several Senate Democrats, who have said the pipeline project would create far fewer than the thousands of jobs Republicans and pipeline supporters have promised.

In her opening statement at a committee markup on the pipeline bill, progressive star Sen. Elizabeth Warren, D-Mass., asked members “What if we focus on highways instead of pipelines?”

Obama’s larger economic vision echoed that that of a prominent Democrat—just not the one leading the primary field. “Senator Warren has very much driven this conversation for the past two years,” said Ilya Sheyman, political director of Moveon.org Political Action. “This speaks to the growing influence of progressives in the party.”

WARREN RESPONDS TO PROGRESSIVE STATE OF THE UNION.

RT Elizabeth Warren (@SenWarren): Great speech, Mr. President. Looking forward to working with the @WhiteHouse to build an economy that works for all our families. #SOTU

“President Obama said it right: “This country does best when everyone gets their fair shot, everyone does their fair share and everyone plays by the same set of rules.” He laid out ways we can create more opportunities for working families — helping students get an education without getting crushed by debt, expanding access to paid sick time and family leave, and investing in medical and scientific research for the future. He also made clear that the White House will push back hard against efforts to roll back critical Wall Street reforms. Families just need a level playing field, and if they can get it, we can rebuild America’s great middle class. It’s time to get started.” –Sen. Warren, Facebook 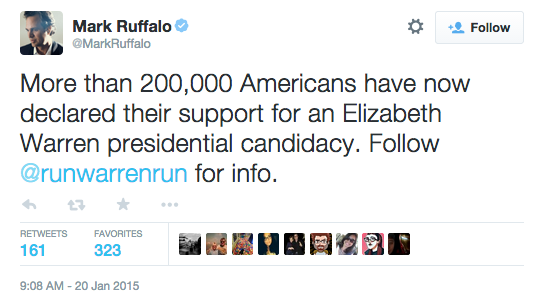