MOVEON TEAMS UP WITH VETERANS TO URGE SEN. MCCAIN, GOP LEADERS TO UNENDORSE TRUMP. In less than 48 hours this week, more than 100,000 veterans, military family members, and American voters signed a MoveOn petition urging Sen. John McCain and other Republican leaders to revoke their endorsements of Donald Trump, following Trump’s attack on Khizr and Ghazala Khan, Gold Star parents. Veterans joined together on Capitol Hill on Thursday to deliver the signatures to McCain’s office, a joint effort of MoveOn.org and Common Defense PAC.

Here’s more from The Arizona Republic: “Six veterans, including a Muslim veteran from McCain’s home state of Arizona, praised the former Vietnam prisoner of war as ‘courageous’ and a “man of honor” in pleading with him to reject Trump. … ‘Donald Trump and his surrogates have demonstrated that their bigotry and hate speech know no bounds,’ said Nate Terani, a Muslim Navy veteran from Arizona. ‘And they hold no American value or ideal as sacred.’”

** See bios of the veterans here.

‘A NATION DIVIDED AGAINST ITSELF CANNOT STAND’: “When Trump attacks the Khan family, he attacks all military families who have lived experiences that Trump will never know. Trump’s message seeks to divide our country, and a nation divided against itself cannot stand. Do not be afraid to condemn this man; he does not represent what this country stands for. Senator McCain, please stand with your fellow veterans, good men and women who sacrificed themselves for this country.” –Veteran Crystal Cravens, a mother who student who served for four years as a Signal System Support Specialist in the Army and recently organized a 300+ protest against Donald Trump’s recent rally at UCCS

And a picture of Nate Terani, the first Muslim American invited to join the Navy’s Presidential Honor Guard, and fellow veterans delivering petitions from the Huffington Post’s Jennifer Bendery: 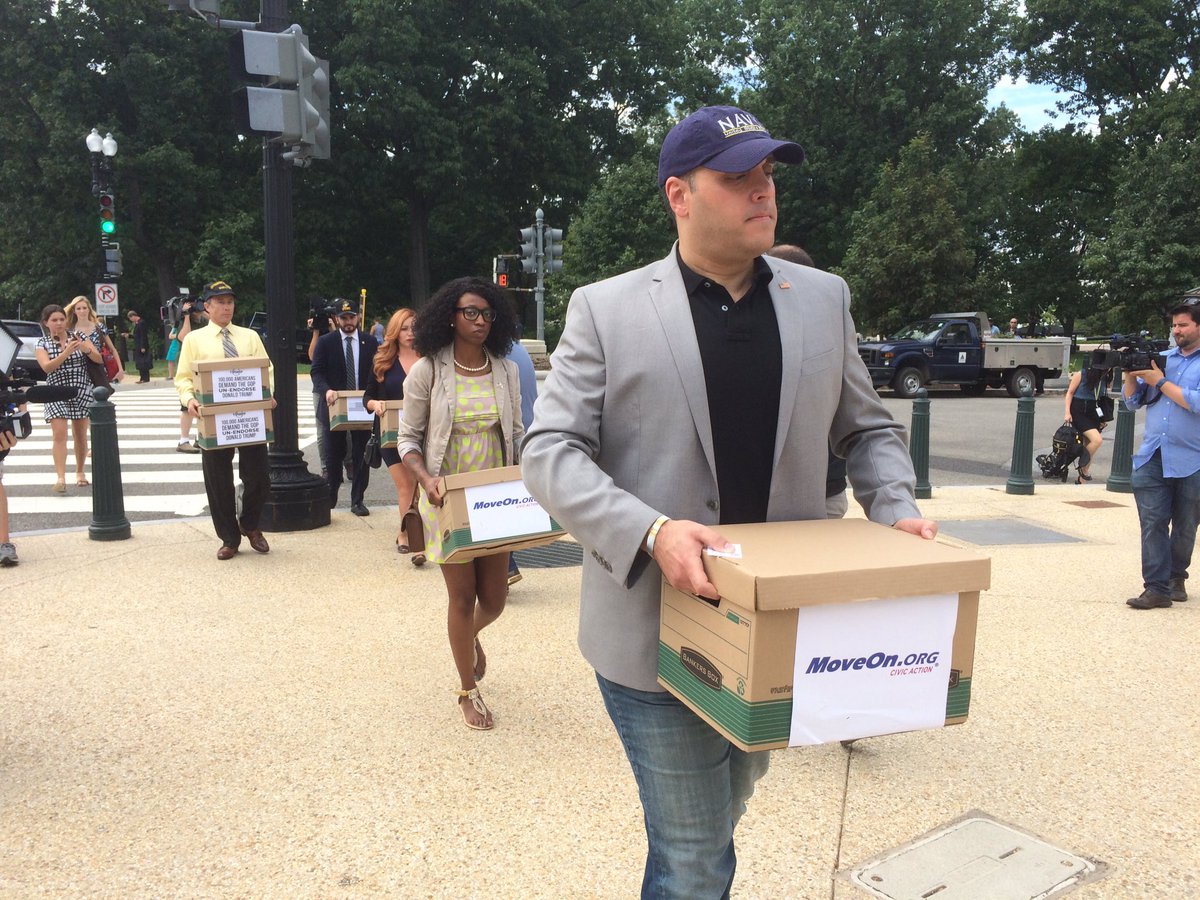 And here’s a photo of the delivery from The New York Times: 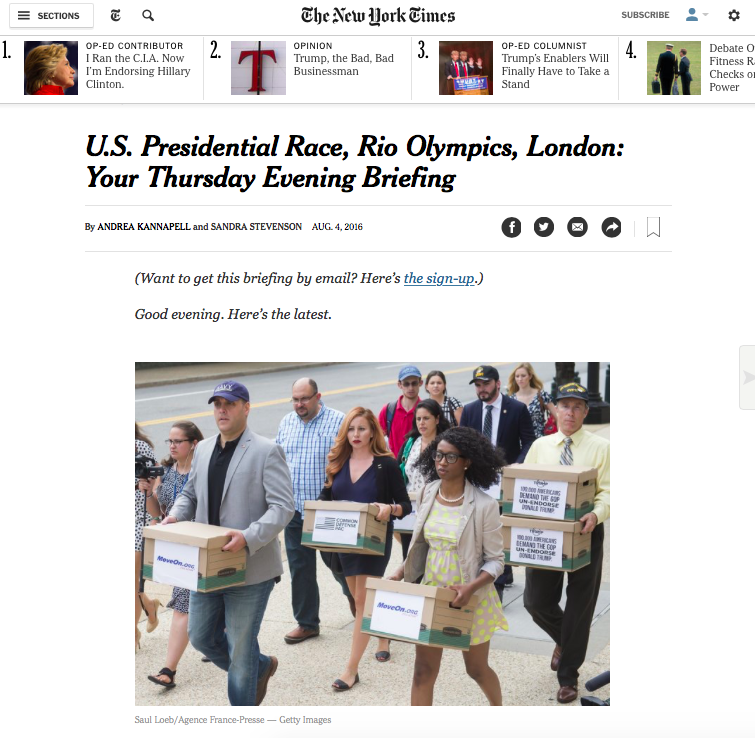 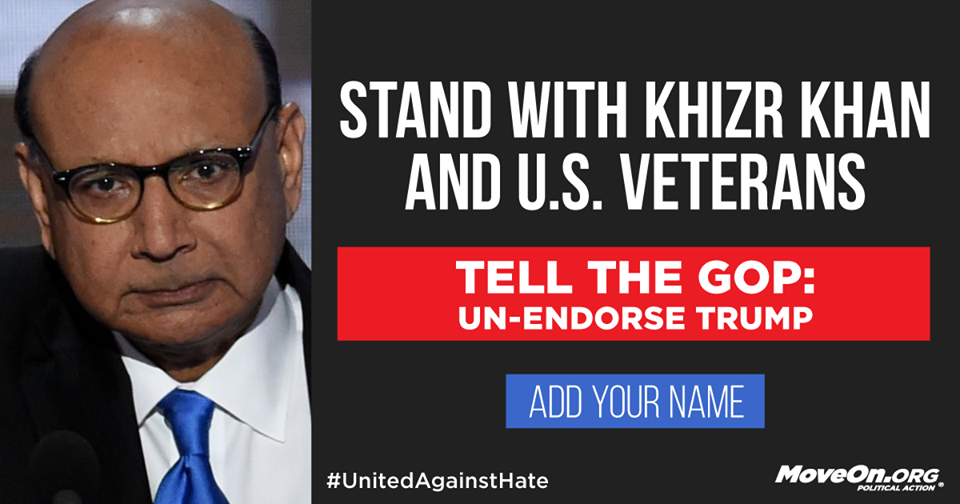 MCCAIN REFUSES TO SAY IF HE’S COMFORTABLE GIVING TRUMP ACCESS TO NUKES. In a conversation with reporters this week, Sen. McCain hesitated and then refused to clearly answer whether he’s comfortable with Donald Trump having access to the nation’s nuclear arsenal. Here’s more from Greg Sargent at The Washington Post:

Let’s pause to consider how devastating this one moment is — or should be — for Trump. The 2008 Republican presidential nominee and chairman of the Senate Armed Services Committee, a man who is widely seen as a war hero — who has been tapped by the Sunday shows to hold forth on foreign policy and national security issues probably hundreds of times — declined to say whether he would be comfortable with putting Trump in charge of the maximal destructive power of the American military.

ICYMI: POLLING SHOWS ‘SINGLE MOST DAMNING CASE’ AGAINST TRUMP IS VIOLENCE. An innovative polling project by Lake Research Partners and Anat Shenker Osorio Communications found that the “single most damning case against Trump … is that as President he would escalate the likelihood of catastrophic violent conflict from without and within, posing a serious threat to the future of the United States” and that “voters have grave concerns about trusting Trump with the country’s nuclear arsenal and that his penchant for fomenting division could lead to a new civil war inside America.”

The polling looked at attitudes of independent swing voters and the Rising American Electorate (defined as voters of color, younger unmarried women, and Millennials) across 13 battleground states and was commissioned by MoveOn.org Political Action. See the full polling results here.

TAMMY DUCKWORTH: ‘NOTHING EASY ABOUT IT.’ In response to one of Donald Trump’s latest comments – that he’s “always wanted” a Purple Heart, and being gifted one from a supporter was “much easier” than earning one, Sen. Tammy Duckworth – a Purple Heart veteran – replied with this tweet: 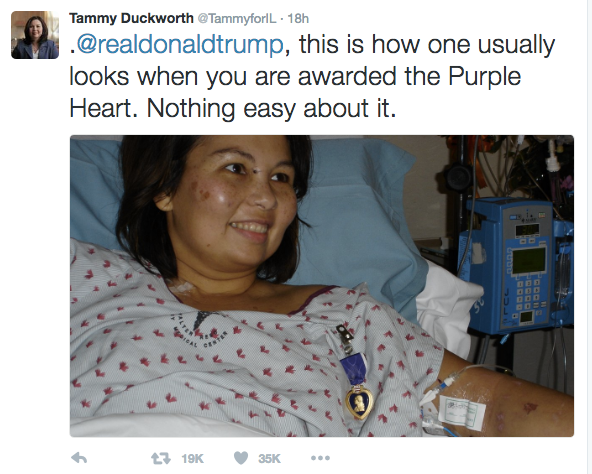