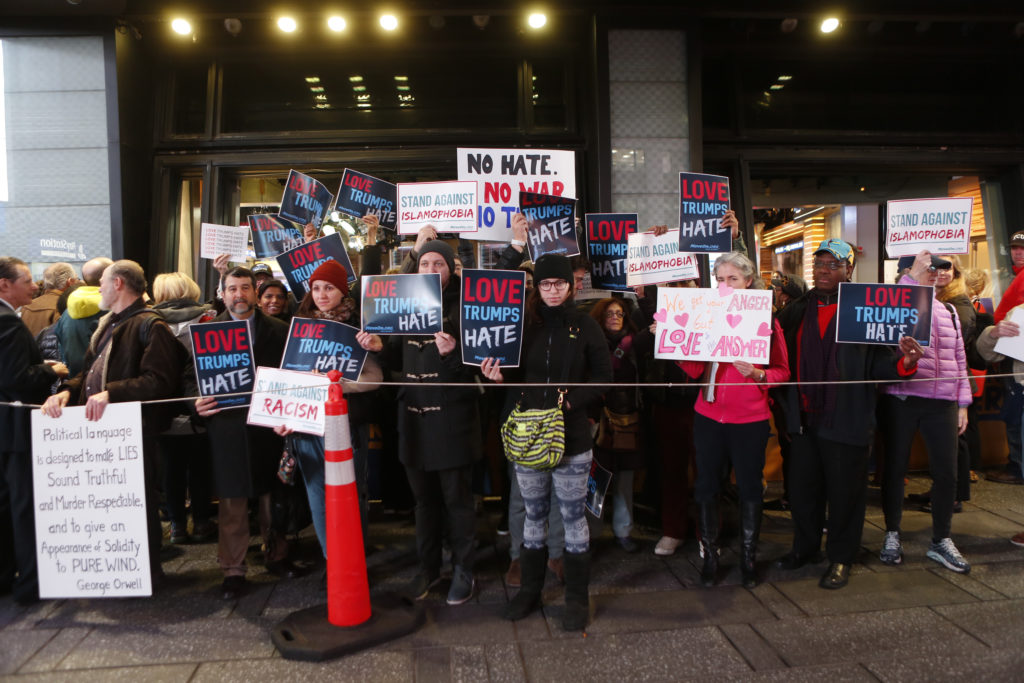 On Wednesday March 16, I faced physical aggression from one of Donald Trump’s biggest supporters: the media. The day didn’t start that way though.

When Donald Trump first announced his candidacy for president in all of its gaudy, escalator-filled glory, it was clear that his campaign would center around one core theme: hate. As the campaign’s gone on, we’ve learned just how much hate:

We’ve seen this hatred manifest itself in violence and threats of violence against peaceful protesters at Trump campaign rallies and other events. Wednesday morning, I experienced this violence and violation of rights directly.

With major primary elections Tuesday night, we knew that millions of Americans would wake up Wednesday morning and turn on their televisions to learn the election results, and we wanted to reassure them that there are plenty of people standing up for love, not hate.

So a group of more than 30 MoveOn members and allies, along with myself and a colleague, woke up bright and early to be outside at the Times Square set of ABC’s “Good Morning America” by 6:30 a.m.—as spectators do every day. We were tired, but we were excited to join the outdoor audience holding signs sharing messages they care about—an audience that is seen by millions.

Our messages weren’t “Happy Birthday” or “I Traveled X Miles to Be Here.” Ours was a message I believe to be far more important for millions of viewers to see: “Love trumps hate.” 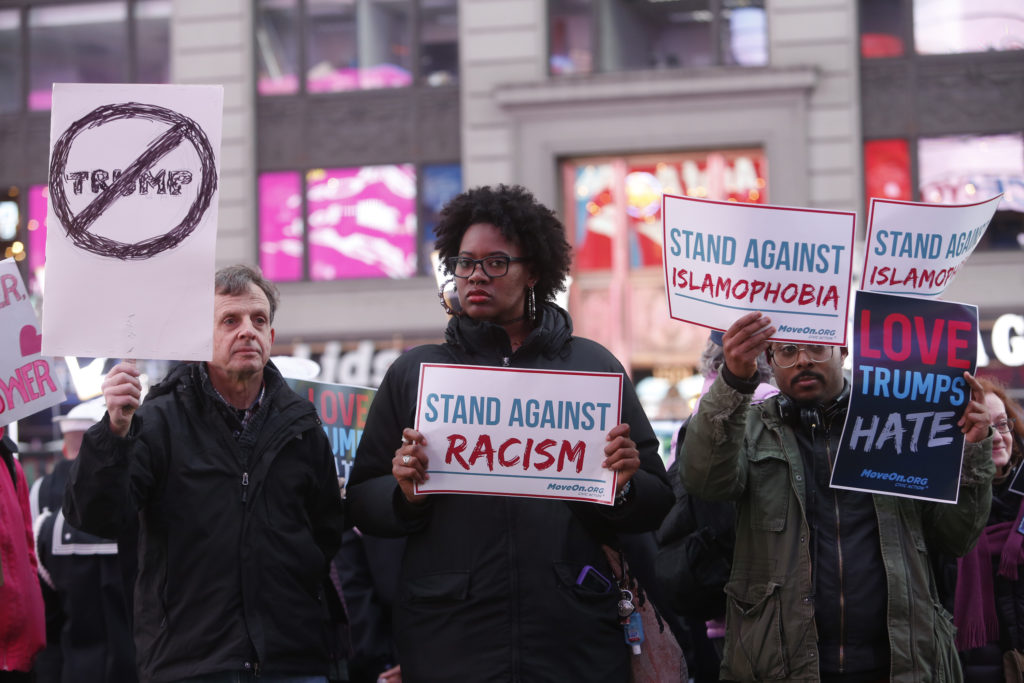 Things were seemingly going well—participants even got a wave and thumbs-up from Robin Roberts, one of the hosts of the show. But as our numbers grew and our signs went up, I was approached by two members of the ABC News security team. Their demeanor was uninviting, and their aggressive questions came quickly:

I explained that we were, of course, peaceful, let them know our plans, and assured them we had no plans to disrupt their broadcast—we just wanted to share our message. I even mentioned that I, myself, had been on the show.

“Were you a guest or have you watched at home? You’ve never been a guest on this show.”

Because what could this young, Black person possibly have done to make it onto one of the biggest morning shows on television? Well, I started a viral petition campaign against the clothing company Abercrombie & Fitch’s discriminatory practices when I was 18.

I jokingly invited them to “Google me” and tried to move the conversation back to the fact that we were peacefully gathered. After this interrogation and attempt to completely undermine me, one of the men said the racially-coded word “thugs” under his breath as they both walked away.

A few moments later, I introduced myself to the two counter-terrorism officers with the New York City Police Department, who showed up shortly after the security guards finished a loud and seemingly angry phone call. I let them know that I was the point of contact if they had any concerns about our peaceful assembly. When I extended my hand, not only did they not shake it, they ignored me entirely.

Regardless of this, I knew we had a right to assemble, and I and my colleague, a seasoned activist, intended to ensure that the volunteers were able to remain present and deliver their message that “Love trumps hate.” The 30 or so MoveOn members and allies were enthusiastic about being there—and they had the right to be there. 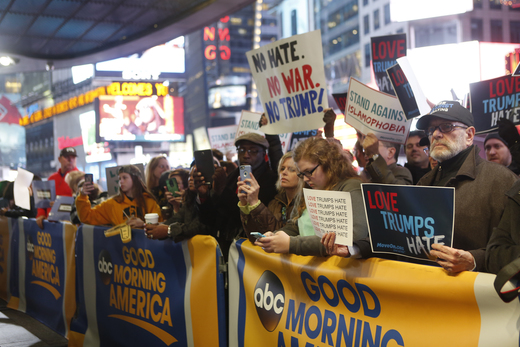 Despite “Good Morning America” often panning the cameras to the Times Square audience, it became clear that they were absolutely not going to have our message of love and anti-racism in any clips or as the backdrop of the show. The hostility of officers and the reason for the explicit desire to keep our signs off the show became clear when, suddenly, we heard Donald Trump being interviewed over the phone by George Stephanopoulos.

As Trump shared his message of bigotry with the anchors, we chanted, “Love trumps hate,” with our signs held high. The anchors never even mentioned the fact that there are millions of ordinary people who oppose Donald Trump and his messages of hate—including the folks right outside

This experience made plain the mainstream media’s dangerous complicity in spreading a bigoted and violent message while systematically silencing messages of dissent and peace. So far, Donald Trump has been given more airtime on TV than all of the other candidates combined, giving him an estimated $1.9 billion in free advertising because of the media. [1]

Even though we stopped chanting as soon as Trump’s segment was finished, we noticed “Good Morning America” staff moving several set pieces from outside the studio to inside. They went so far as to move several segments they had planned for outside to inside the studio simply to keep our bodies and our signs out of sight.

After the demonstration finished and the volunteers had left, my colleague, a friend, and I decided to leave. As we were departing, we noticed that GMA was subtly attempting to shoot one of the previously canceled outdoor segments on the sidewalk on the side of the building. As we tried to go to the sidewalk where the segment was being filmed, we were blocked off by security as others were allowed to pass. That’s a violation of our rights.

After several attempts to go onto the public sidewalk and being ignored when we asked if they had permits to shut down the sidewalk, they absolutely refused to let us enter so our signs would not be in the background of their shots. Since we were left on the sidelines, we began chanting, “Love trumps hate.”

They stopped filming, but the security and staff at this point became more aggressive, so we got our phone cameras out and began filming the interaction.

I continued to ask if they had permits to shut down the sidewalk or if they were illegally prohibiting us from being on a public walkway. One man (only identified as “Steve” as his colleagues tried to deescalate him) became very angry. He stepped toward me with aggression and shoved my hand, as though he were trying to make me drop the phone on which I’d been recording video.

GMA Employee Shoves Peaceful ProtestorHey, friends. I’ve been taking a much need break from Facebook, but I wanted to share this experience I had on Wednesday:An employee of Good Morning America assaulted me as I attempted to peacefully demonstrate against Donald Trump. This act of violence against me by a member of the media for simply exercising my rights and making my voice heard highlights the need for us to continue the work it takes so that Donald Trump does not become our president. The media shouldn’t simply be giving a megaphone to Trump and his ratings-boosting bigotry. The media should be standing up for the same First Amendment that protects them and covering dissenting voices, rather than denying activists’ rights with or without physical force.You can read the whole story here: https://front.moveon.org/these-are-the-signs-good-morning-america-doesnt-want-you-to-see/#.VuyAchIrKt9#DumpTrump

Several GMA staff held him back afterward—I’m not sure what else he was planning to do. As he walked away, he flipped us off.

A police officer stood only a few feet from me, and as my colleague and I told him that I had been assaulted by the GMA staffer, the officer simply turned his back to us.

What this entire morning showed me is that the media is complicit in Donald Trump’s rise by giving him disproportionate attention, preferential treatment, and airtime. The media has helped to create Donald Trump’s massive following. By turning him into a larger-than-life character, the media is causing Americans to forget that this isn’t “The Apprentice,” this isn’t reality TV. This is real life.

The stakes for some producers in airing our anti-hate messages may be that Donald Trump will no longer want to be on air with them. However, the risks in continuing to uplift Donald Trump while erasing those of us who will continue, day in and day out, to stand up for values like peace, love, inclusion, and democracy, and ensure his hateful, racist, and violence-inciting ideology does not prevail are much higher.

GMA staff’s rude and hostile behavior toward peaceful protestors, their infringement of our right to peaceably assemble in public space, and their act of violence against me for simply exercising my rights and making my voice heard highlights the need for us to continue the work it takes so that Donald Trump does not become our president. The media shouldn’t simply be giving a megaphone to Trump and his ratings-boosting bigotry without elevating the voices of the majority of Americans who reject his hate. The media should stand up for the same First Amendment that protects them and protects dissent voices, rather than denying activists their rights.