The video the NRA doesn’t want you to see: MoveOn gun owners in DC

When 15 gun owners sat down with one of President Obama’s closest advisors last week, each one declared their full-throated support for stronger gun laws—and asked for the president to use his executive authority to strengthen background check requirements before the end of the year.

Thanks to contributions from fellow MoveOn members, these gun owners traveled to Washington, D.C., last week to meet with the White House, lawmakers, and the media. Watch these inspiring and courageous gun owners speak out and then share the video to show your support and to help elevate their voices. 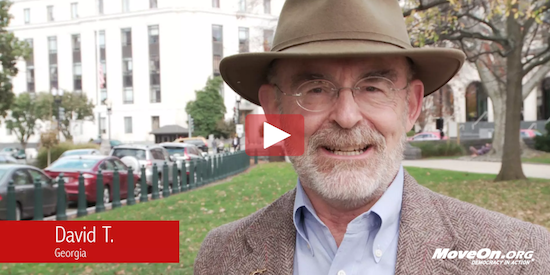 David T. is a retired Army officer from Georgia who talks about his “closet full of guns.” Mark C. from Virginia is a Republican and a Christian conservative who’s never supported President Obama on a single issue—until now.

It’s the beginning of a movement—ideologically-diverse gun owners, who support gun control, standing up to the NRA and demanding that our leaders act to reduce the epidemic of gun violence in America.

After the mass shooting at Umpqua Community College in Oregon last month, we launched an initiative to organize gun owners. Within a week of the tragedy, more than 32,000 gun-owning MoveOn members had joined the fight for stronger gun laws. At the same time, more conservative-leaning gun owners came together and launched the American Coalition for Responsible Gun Ownership. Our two groups quickly united to push for action and to challenge the NRA.

The NRA says it speaks for our country’s gun owners, but it has just 5 million dues-paying members—only about 6% of all U.S. gun owners.1 And even many NRA members disagree with the organization on policy. For instance, the NRA opposes requiring background checks for private and gun show sales—the policy President Obama could issue in just a few weeks, if he has enough backing—but 72 percent of NRA members support it, according to a poll MoveOn.org and the Center for American Progress released last week in conjunction with the D.C. trip.2

The gun owners also delivered 1.1 million signatures to lawmakers, demanding action now to reduce gun violence and save lives. Here we are delivering the signatures to Senator Chuck Schumer: 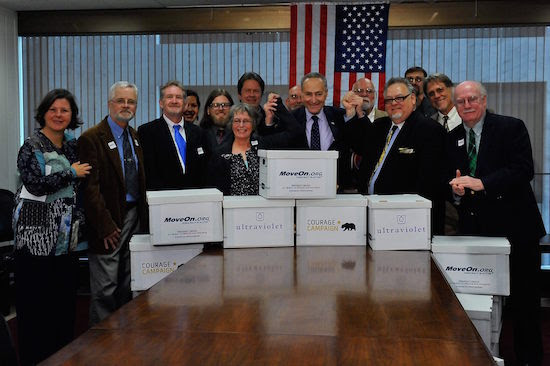 The delegation represented 12 states, and the gun owners ranged in age from their mid-30s to their mid-70s. Markus R. lives in rural Pennsylvania, is an avid hunter, and believes that the very fabric of what it means to live in America is changing because gun violence is so rampant. Grant S. from Kentucky is a lifelong NRA member who says the NRA no longer represents him. Karen K. from Tennessee is a former NRA member and a survivor of gun violence working to prevent others from experiencing what she has.

Watch the video of this powerful trip to Washington, D.C., now, and then show your support of these courageous gun owners and their message by sharing it on Facebook.

Make no mistake: Standing up to the NRA is not easy, but this coalition of responsible gun owners is resolute—and we’re standing strong with them.