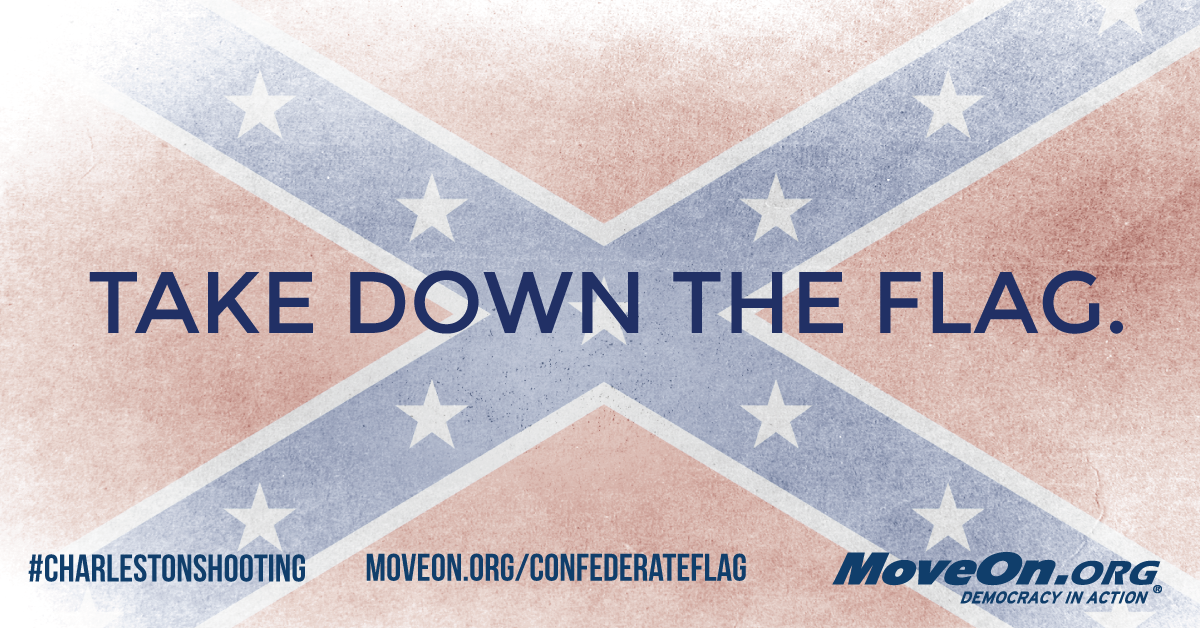 I was a very poor 16-year-old so, as you can imagine, having a car was out of the question. Wherever I needed to go, I walked—which was not always pleasant on a Florida summer day.

It was on one of those hot days, while walking to the corner store, that a red truck slowed beside me and a white man stuck his head out of the window to scream, “Go back to Africa, mixed-breed N—–!” After a moment of shock, I told him where HE should go (to a place hotter than Florida!). As he drove away, I saw something prominently displayed in his back window: a Confederate flag.

Growing up in the South, I had seen that flag before and I knew what it stood for. The Confederate flag is a symbol of hatred—hatred for Black Americans. Countless times, I have been told, “If this flag offends you, you need a history lesson.” Let me be clear: This flag offends me, but it is YOU who needs the history lesson.

A century and a half ago, our nation faced a civil war. More than 620,000 Americans lost their lives at the hands of other Americans—nearly equal to the total number of American deaths in all other wars combined.1 What caused this senseless war? The fight for freedom for enslaved Black Americans—or for the Confederates of the South, the fight against it.

In 1860, seven Southern states decided to secede from the Union and form the Confederate States of America. They would later be joined by four other states. They were fighting to defend their “right” to continue to own the more than 3.5 MILLION African slaves of the South2, who performed unpaid and arduous labor for slave owners, many of whom owned large plantations. As Southerners fought and killed to defend slavery they did so under the battle flag of the Confederate Army, which we know today as the Confederate flag.

Still don’t believe that the Confederate flag is a clear symbol of racism and hatred toward Blacks? Yesterday, Ta-Nehesi Coates unearthed a quote in his impassioned piece in The Atlantic from the Confederates themselves proving this notion true:

“Our new government is founded upon exactly the opposite idea; its foundations are laid, its corner-stone rests, upon the great truth that the negro is not equal to the white man; that slavery subordination to the superior race is his natural and normal condition. This, our new government, is the first, in the history of the world, based upon this great physical, philosophical, and moral truth…”

In that time—and to this day—there was a group of people who believed what Confederates described as “the great truth” that “the negro is not equal to the white man; that slavery subordination to the superior race is his natural and normal condition.”

In 1860, it was displayed through white’s ownership of Blacks and through Blacks’ complete lack of human rights.

Today, it is various forms of continued systemic oppression—especially our system of mass incarceration and criminalization, which author Michelle Alexander persuasively argues is essentially a “New Jim Crow” regime—that leave Blacks more likely to face economic injustice, violence, discrimination, stigmatization, and other struggles in a society that still in many ways continues to treat Blacks as second-class citizens.

On Wednesday evening, Dylann Roof, a 21-year-old white man, walked into Emanuel AME Church in Charleston, South Carolina, and murdered nine innocent people for what, it has become evident, are the same white supremacist principles that the Confederates fired their own guns for in 1865—the deep-seated belief that Blacks are inferior to whites.

It’s important to learn a little history about Emanuel AME. In 1822, Demark Vesey, a founding member of Emanuel AME, was leading what would have been the largest slave revolt in the history of the United States. When law enforcement found out about the plan, Vesey and five others were executed. Knowing the role that Emanuel AME played in the plotted uprising, white supremacists burned down the church. Emanuel AME would go on to rebuild and become a historic symbol of Black resistance to slavery and racism. Yet when Emanuel AME was attacked again on Wednesday, the next day, as South Carolina and the nation mourned, the Confederate flag flew over the capitol of South Carolina, taunting every Black American who crossed its path.

The Confederate flag is not unique to South Carolina. The flag adorned part of Georgia’s state flag from 1956 to 2001, remains a part of Mississippi’s flag, and still flies over Texas’ Capitol. In fact, despite the fact that the Supreme Court has ruled that flags cannot be legally protected from burning and desecrations, in five U.S. states there are still laws on the books that attempt to protect the Confederate flag, even though such laws cannot be enforced.

So I pose this question: Why is a flag that represents the army that fought and lost (thankfully) to protect slavery flown and honored by state governments in America? There’s no good reason. And that is why it’s time to take down the flag.

Since the Charleston massacre, a petition on MoveOn.org already has more than 350,000 signatures asking South Carolina officials to take down the flag. As the petition creator, Karen Hunter, explains: “It’s time to put that symbol of rebellion and racism behind us and move toward healing and a better United States of America!”

As a person of color, when I see the Confederate flag, I am filled with fear. I am instantly reminded of the fact that white supremacy still exists. I am reminded that my life is expendable in some eyes—whether at the hands of an overzealous cop or the hands of a homegrown terrorist in the pew of a place of worship.

The Civil War never truly ended … it is now just fought in the streets of Ferguson, the community pools of Texas, the churches of South Carolina. Until we take down the Confederate flag and everything it represents, the war has not been won.