Congress must deliver a clean Dream Act to provide legal protections for hundreds of thousands of young immigrants so cruelly impacted by the Trump administration’s decision to end the popular Deferred Action for Childhood Arrivals (DACA) program.

Start your own petition to your members of Congress: Click here to start your campaign.

You can say, “It’s time for Congress to deliver a clean Dream Act. We are counting on you to do everything in your power to stand with Dreamers and secure the bipartisan Dream Act.”

Call your member of Congress: Click here to find your representative.

More than 19,000 Dreamers have already lost their DACA status—and hundreds of thousands are being forced into a dizzying and dangerous legal limbo while Republicans in Congress attempt to use Dreamer’s lives as a bargaining chip for their dangerous anti-immigrant agenda.
You can say, “Congress must ensure protections for Dreamers without putting their families at risk of deportation and tearing communities apart. Pass the bipartisan Dream Act now.”

“We sincerely thank you for your leadership in standing up for these young people, many of whom are serving our country as active military personnel, firefighters, EMTs, and nurses, as well as students, entrepreneurs, and others,” the letter reads. “These young people are making our country stronger and better, and Congress must act now to resolve this issue before the end of the year.”

The letter continues: “We value your promise to hold all the members of your caucus to vote on a clean Dream Act without harmful amendments, like a costly border wall, border militarization such as an increase in Border Patrol agents, additional immigration detention funding or increases in ICE agents, or other measures that undermine the spirit of this bill.”

Our message is clear: NOW is the time for members of Congress to show that they are listening and acting on their constituents’ demand for a clean Dream Act—or begin facing the consequences.

Hundreds of thousands of immigrant youth should never have been thrown into this kind of cruel chaos by Donald Trump, which he created when he ended the successful DACA program.

As Trump and the hardliner wing of the Republican Party continue to escalate their extreme demands on immigration, it’s going to be up to each of us to make sure that Congress does not go home for the holidays until Dreamers and immigrant youth are no longer living in fear of deportation.

You can see the poll, which was commissioned by America’s Voice and MoveOn.org here:

Click here or on the image below to get your sticker. 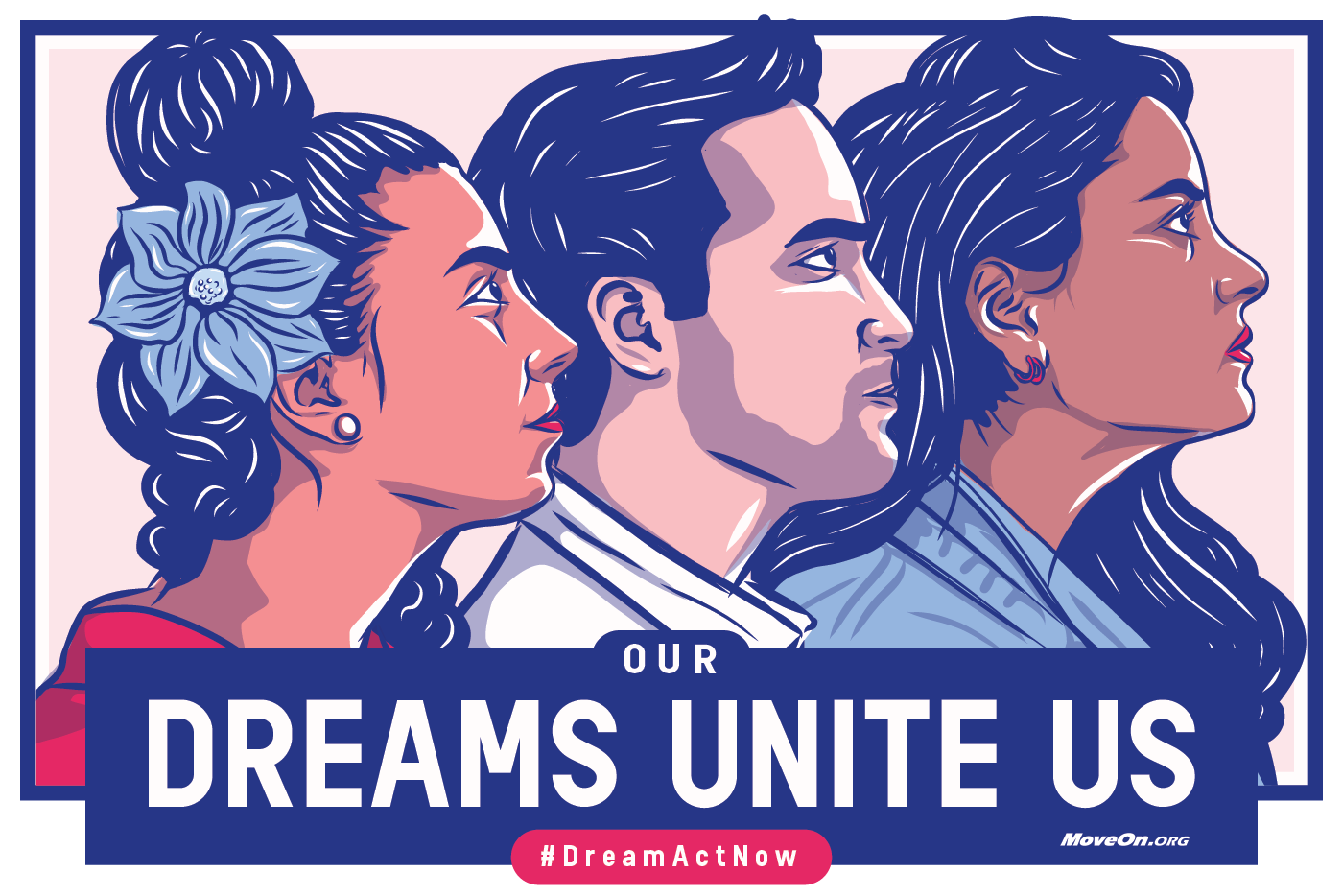 Trump says he wants a "bill of love" to protect Dreamers, and then turns around and uses them as hostages.

Posted by MoveOn.org on Wednesday, February 7, 2018

Dear Ellen, These Girls Have a Letter for You

The best thing you'll watch today: These young daughters of Dreamer moms skipped a letter to Santa this year and instead wrote to Ellen DeGeneres.Watch then show your support for a #DreamActNow: MoveOn.org/DreamAct

Posted by MoveOn.org on Thursday, December 7, 2017

"Give us your tired, your poor, your huddled masses yearning to breathe free." The story of the Dreamer is as American as the Statue of Liberty.Tell Congress to pass a Dream Act today: (202) 858-3330

We wanted to send Paul Ryan something this holiday, so we made a billboard for him.Tell your representatives to pass a clean Dream Act now: (855) 971-2533.

This principal and her high school students are standing up to Donald J. Trump's cruel treatment of immigrant youth. You can join them – call your representative and demand a clean Dream Act by December: (202) 858-3330

Thousands of brave students walked out of class today, taking a stand for justice. Stand with them. Call your representative. Tell them to pass a clean Dream Act by December: (202) 858-3330

Posted by MoveOn.org on Thursday, November 9, 2017

Faith leaders arrested after standing up for Dreamers

These faith leaders got arrested after standing up for Dreamers. Do what's right and tell Congress to pass a clean Dream Act: (855) 971-2533.

Posted by MoveOn.org on Thursday, November 2, 2017