Senator Warren returned to Washington this week as the 114th Congress convened and wasted no time before delivering a rousing economic speech and pushing back against a Republican proposal to cut Social Security. With Sen. Warren’s leadership and vision on full display, calls for her to enter the presidential race are growing louder every day.

TODAY at 10 AM EST: SENATE ENERGY HEARING ON KEYSTONE XL. Warren joins the Senate Committee on Energy and Natural Resources, which is holding its first hearing of 2015 today on the Keystone XL pipeline. Warren has criticized the move, saying it tells her “with the Republican rhetoric that they are going to find things for us to work together on—their actions don’t match their words.”​

CNN’s Tami Luhby has the bullet-by-bullet summary of the speech: “Elizabeth Warren: 8 ways to restore the middle class”

Kyle Cheney in Politico: “The populist stemwinder drew raucous applause from a supportive Washington audience that included labor leaders from around the country. … ‘If we are ever going to un-rig the system then we need to make some important political changes,’ she said. ‘We have seen David beat Goliath. We have seen the lobbyists lose.’”

AFL-CIO SPEECH RENEWS CALLS FOR PRESIDENTIAL BID. Warren’s keynote address fueled discussion of whether she will run for president.

Karen Tumulty, Washington Post: “Warren—an outspoken critic of Wall Street’s coziness with Washington—is admired by many in the party’s base for her ability to frame an argument that the system is rigged against the interests of ordinary workers. That kind of message, some say, is what was missing during the 2014 midterm elections.”

National Journal’s Emily Schultheis story bears this headline: “Why Elizabeth Warren’s 2015 Kick-Off Speech Matters.” She writes: “What’s just as important as what Warren said is where and when she said it: as a keynote at a major labor event, just weeks after progressives launched a massive draft movement.” 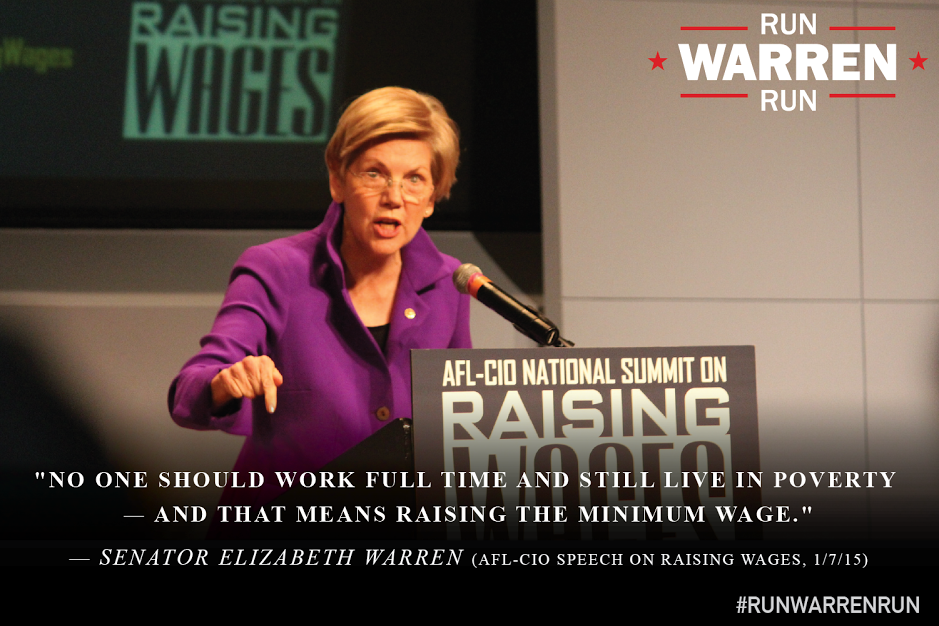 ABC’s Rick Klein’s analysis: “The power of [Warren’s economic] argument is that the institutions we trust to protect and support us are in fact weakening our economy and its middle-class households. That’s the economic populism that made a liberal senator from Massachusetts a big campaign draw in Kentucky and West Virginia last fall.”

Ruby Cramer ‏@rubycramer: Warren: “It’s time to break up the Wall St banks and remind the politicians they don’t work for the big banks – they work for us.” #AFLCIO

“Senator Warren’s message—that it’s time to give corporate lobbyists and their trickle-down policies the boot and build an economy that works for everyone, not just the wealthy few—will define America’s economic debate for the next two years. Majorities of Americans from both parties and all walks of life agree with her that it’s time to raise the minimum wage, protect and expand Social Security and Medicare, and ensure that wealthy corporations pay their fair share. As Warren says, no one working full-time should live in poverty.”

WARREN’S ECONOMIC VISION WILL SHAPE 2016 AGENDA. Regardless of whether she runs, the AP’s Ken Thomas says, “It’s clear the Massachusetts senator plans to take active steps alongside labor leaders, to shape the policy debate inside the Democratic Party at the start of the 2016 White House campaign.”

It’s “Elizabeth Warren vs. The World,” says David Catanese in US News: “Her remarks indicate that she believes the current economic imbalance is a sweeping generational problem that swelled over several administrations of both parties. And that means she’s poised to stir the pot on her own side of the aisle in order to reframe the way her party thinks about the politics of economics.”

“She’s become the standard-bearer for Democrats who are prepared to deal with the fundamental issues of the political economy,” The Albert Shaker Institute’s Leo Casey tells Catanese. “We look to her for her leadership. It has to have influence on the future direction of the Democratic Party. Without that sort of message, there’s no reason for people to go out and vote for a Democrat.”

READY FOR WARREN HOSTS HOUSE PARTIES. Another group working to draft Sen. Warren held more than 30 house parties across the country Wednesday night, where supporters of Sen. Warren came together to organize future actions and write postcards to Sen. Warren. 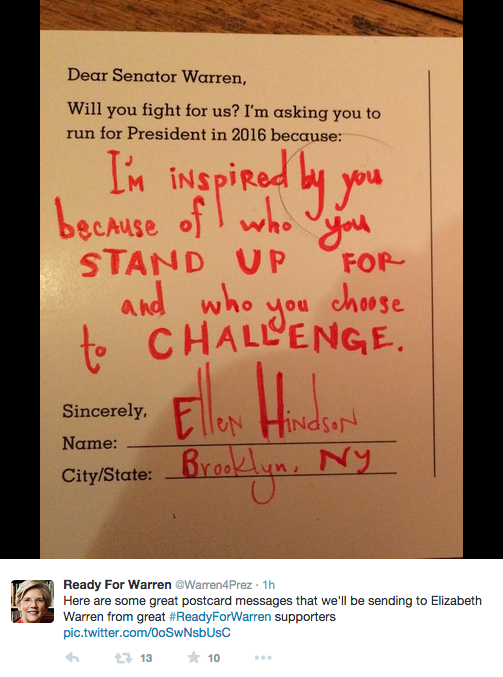 Check out this explainer from MSNBC’s Steve Benen for the details.

Sen. Warren on Facebook: “It’s ridiculous – but not surprising – that on the very first day of the new Congress, Republicans are manufacturing a Social Security crisis to threaten benefits for millions of disabled Americans – including 233,260 in Massachusetts alone. We can’t turn our backs on the promises we’ve made to our families, friends, and neighbors who need our help the most. House Republicans should stop playing political games to put America’s most vulnerable at risk.”