Happy New Year! Organizing is well underway in Iowa and our New Hampshire program will launch this month. Stay tuned for updates on our growing movement, and you can always reach us at press@moveon.org.

WWWD: What Will Warren Do? Here’s more from the AP’s list of “10 things to watch in ’15 ahead of Iowa Caucus” with Thomas Beaumont reporting from Des Moines​: “Massachusetts Sen. Elizabeth Warren has, for months, told anyone able to ask that she ‘is not running for president.’ That has not stopped hopeful liberals in the Democratic Party from talking up a Warren campaign. Activists have held ‘Run Warren Run’ events in key states, including a Dec. 17 rally in Des Moines.”

While Warren has said she isn’t running, Larry Sabato says “that can change on any given day” and continues to list her as a top contender for the Democratic nomination.

WARREN MAKES TOP ‘POLITICIANS TO WATCH’ LISTS. She tops Sean Sullivan’s 5 to watch in the Washington Post: “No one has caught fire in the Democratic Party like Warren, the leader of the populist, anti-Wall Street movement the party is embracing more and more. … Warren is as buzzy a figure in the Democratic base right now as any politician could dream to be. And on the heels of a tough midterm defeat, Democrats are looking for something and someone to get really excited about.”

Warren also tops the AP’s list of 10 people who could have an impact on the 2016 campaign: “The architect of President Barack Obama’s consumer financial protection agency, Warren would be able to quickly raise millions from an already enthusiastic following.”

And here’s Mark Weisbrot—co-director of the Center for Economic and Policy Research and president of Just Foreign Policy—writing for McClatchy-Tribune News Service on Warren’s policy agenda: Warren is right on issues that matter most to Democratic voters

“While most politicians were content to give the banks whatever they wanted, Warren has had the audacity to argue that the millions of people who lost their homes or their jobs were more deserving of help than the bankers who caused the crisis; that we needed serious reforms to make sure that this kind of financial disaster didn’t happen again; and that banking executives who committed crimes ought to be prosecuted.”

ICYMI: Lanny Davis, former special counsel to President Clinton, in the Des Moines Register on why contested primaries are important for our democracy: “If for some reason Warren changes her mind and decides to run, vigorous competition and debates among fellow progressives on the best ideas to achieve similar goals will end up strengthening the ultimate Democratic Party nominee—just as was the case for Barack Obama in 2008.” 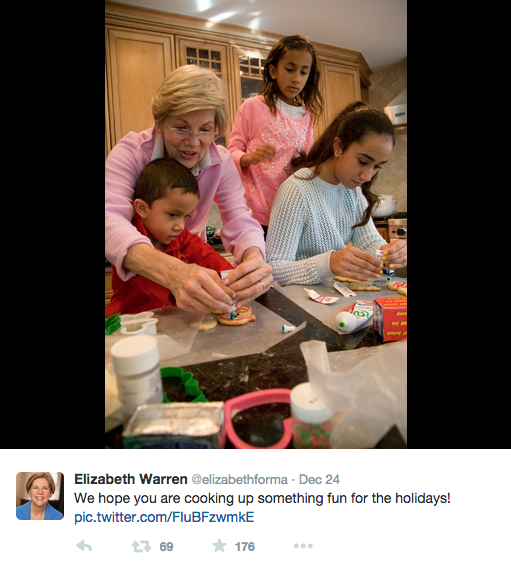