WITH FOCUS GROUP PARTICIPANTS, WARREN HAS ‘STRUCK A CHORD.’ A recent two-hour focus group run by pollster Peter Hart for the Annenberg Public Policy Center at the University of Pennsylvania showed “unexpected” enthusiasm for Sen. Warren’s economic vision, and participants looked favorably upon Warren as a potential presidential candidate.

Here’s The Washington Post’s Dan Balz on the focus group:

“When the name of Sen. Elizabeth Warren (D-Mass.) was introduced into the conversation, however, many of those around the table, regardless of party affiliation, responded positively. To this group, who spoke in stark terms throughout the evening about the economic challenges of working Americans, Warren has struck a chord. …

“‘Elizabeth Warren, from every part on the compass, had a level of support,’ [Hart] said. ‘She’s not invisible. She’s not unknown. She’s not undefined.’ And, he added, she has reached them on the issue that so many spoke about, which was their own economic concerns. ‘You couldn’t leave this without feeling how hard-pressed these people are and how they’re looking for someone who will be a voice for their cause,’ he said. ‘And Elizabeth Warren has broken through.’That, he added, was wholly unexpected when the focus group was organized.”

And John Dickerson has more on “The Warren Commission” in Slate:

“But one politician escaped the voters’ ire: Elizabeth Warren. Six of the 12 said they would like to have Warren over to their house to talk, more than any other possible 2016 presidential contender they were asked about. They said she was ‘down to earth’ and ‘knowledgeable.’ When asked a separate question about which politician they would like to have live next door, they picked Warren over every other contender as well. Jenny Howard, an accountant with student-loan debt

who voted for Romney in 2012 and Sen. John McCain in 2008, also liked Warren: ‘If she ran, she could be the next president because she is personable and knowledgeable and has a good handle on what’s going on in the country.’ ”

IOWANS GATHER TO WAVE SIGNS IN SUPPORT OF A WARREN RUN. Iowa activists turned out in downtown Des Moines on Saturday to wave signs encouraging Sen. Warren to run for president. 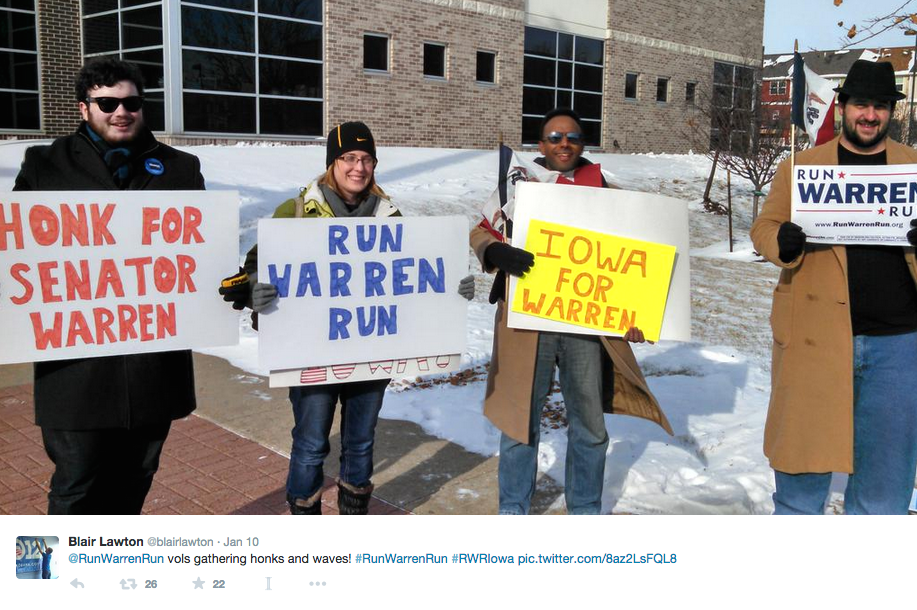 WARREN APPLAUDS OBAMA’S COMMUNITY COLLEGE EFFORT. Praising the president’s proposal to make two years of community college free, Sen. Warren said via her Facebook page: “College students today are drowning in debt, and it is hurting them and hurting our economy. We must to find a way to help families pay for college without condemning them to a lifetime of indebtedness. I appreciate President Obama’s bold proposal, and I look forward to working with him and my colleagues in the Senate to make college affordable for all our students.” 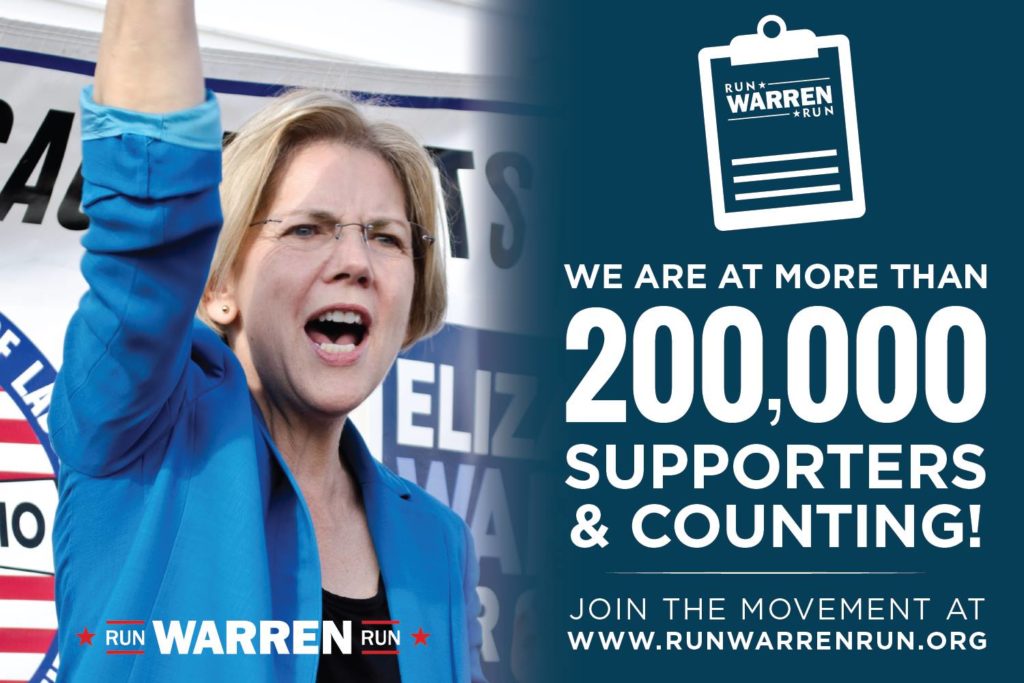 “Democratic critics are becoming increasingly vocal about their opposition to Mr. Obama’s stance. Some of them are popular with members of the party base who will play a major role in choosing the 2016 presidential nominee. … Senator Elizabeth Warren of Massachusetts, a favorite of the Democratic Party’s liberal wing, told a labor forum on Wednesday that trade agreements were among the poor choices that had ‘left America’s middle class in a deep hole.’

“Warren, speaking last week at the AFL-CIO’s Raising Wages Summit: ‘We believe in trade policies and tax codes that will strengthen our economy, that will raise our standard of living, that will create American jobs, because we will never give up on these three words: made in America.’ ”

” ‘We can choose to be a country that lives up to Dr. King’s dreams,’ Warren said. ‘And we can fight to make those dreams a reality.’ The fight remains urgent, Warren added, amid efforts to roll back civil rights advances that King fought for, and as the ‘grinding heel of poverty’ continues to afflict the marginalized. ‘We must fight back,’ Warren said, summoning the populist rhetoric that has made her a national hero to the political left and a bane to many conservatives. ‘It is up to us to put an end to poverty and oppression’ and to ensure every child ‘can walk down the street, free from fear or distrust.’ ” –Travis Andersen, Boston Globe

The Boston Herald’s Antonio Planas has more on the speech, noting the crowd gave Warren several standing ovations: “ ‘In the past half-century, our country has made progress. But we are under attack,’ Warren told worshipers at the Twelfth Baptist Church, where she was presented a Dr. Martin Luther King Jr. Leadership Award. ‘There are those who want to reverse those gains. Those who want to take away votes. Those who want to make it harder to get an education. Those who believe justice and dignity are reserved only for some people. Those who believe it should be a challenge to vote or even walk down the street. The Supreme Court has now struck down a key section of the Voting Rights Act. Young men have died in police custody. And the growing heel of poverty has worn down harder on children of color.’ “

ICYMI—WARREN CHALLENGES REPUBLICANS ON KEYSTONE XL. In her first hearing as a member of the Senate energy committee, Warren blasted her colleagues over the focus on the Keystone XL pipeline. Watch Warren’s remarks here via TakePart.

KEY WARREN QUOTE: “Who does this new Republican Congress work for? Foreign oil companies or the American people?” 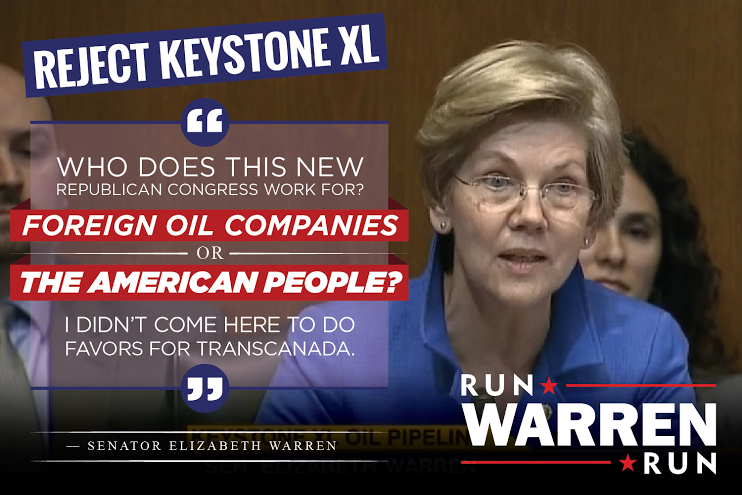