We’re excited for week 2 of the Run Warren Run campaign, after a powerful launch that led the New Republic’s Danny Vinik to write: “If she chooses to run, we’re going to look back at this week as a pivotal moment in Warren’s decision-making.”
This week, the campaign heads to Des Moines for our Iowa kickoff meeting, with the wind at our back after we launched with an 81.3% MoveOn member vote, saw RunWarrenRun.org and our #RunWarrenRun video go live, engaged thousands of progressive organizers and activists at RootsCamp, generated coverage from every major media outlet in the U.S., and the grassroots enthusiasm was fueled further when Senator Warren stepped up and led the fight against the Citigroup-authored rollback of financial reform in the CRomnibus.
Here’s a roundup of just some of the great news coverage of Senator Warren and our Run Warren Run effort from this morning and the weekend:
Mike Allen in this morning’s Politico Playbook: Sen. Elizabeth Warren is keeping herself in the 2016 conversation, repeatedly telling NPR’s Steve Inskeep in a phoner for today’s “Morning Edition”: “I am not running for president” — even after he noted she was speaking in the present tense.
On page A1 of this morning’s Washington Post, Karen Tumulty and Sean Sullivan write that the increased focus on Warren is a sign we are at “the start of an internal struggle between now and the 2016 election over the ideological identity and tactical direction of the party.”
Don’t miss Chris Cillizza’s Friday Washington Post piece talking up the draft Warren movement’s potential to convince Elizabeth Warren to enter the race:

“Let’s say the next three months play out like the past three months. The dominant narrative remains that Clinton is the heavy favorite to be the Democratic nominee. But that storyline is accompanied by another one — which is that the heart of the Democratic Party really wants Warren. And, as that storyline continues, more and more people hear about it and a movement develops, fueled by the anti-Wall Street populism that Warren embodies.
“If Clinton waits until April, let’s say, to announce, it’s uniquely possible that the populist/“draft Warren” movement in the party grows strong enough that it forces the senator to reconsider her past denials of interest in the race[emphasis added]. And if Warren runs, it’s a totally different race for Clinton. (To be clear, Clinton would be a favorite over Warren. But not a huge one.)”

CNN’s Alexandra Jaffe: “The activity surrounding Warren, and the emerging rift within the party, had even Democratic Party officials on Friday predicting a spirited primary battle for the presidential nomination.”
Sunday Show Guests Agree: Elizabeth Warren Would Be a Formidable Candidate

REPRESENTATIVE KEITH ELLISON ON FACE THE NATION: “I think that there’s just throughout the American political landscape right now — I think that right now people want an authentic candidate. Elizabeth Warren comes off as a very authentic person. So that is what people are gravitating towards.”

ALSO ON FACE THE NATION, MICHAEL GERSON: “There is a market in the Democratic party for a populist anti-Wall Street candidate.”
THIS WEEK’S MARTHA RADDATZ: “The liberal group MoveOn.org says it likes Elizabeth Warren and says they’ll try to draft her into a 2016 run.”
THIS WEEK PANELIST MICHAEL SMERCONISH: “Senator Warren is a main event”
MEET THE PRESS RUNS WARREN CLIP: “Let me say this to anyone who is listening at Citi, I agree with you, Dodd-Frank isn’t perfect. It should have broken you into pieces.”
AND ON UP WITH STEVE, MOVEON’S OWN @BENWIKLER DURING DEBATE WITH GOV. HOWARD DEAN: “So much of politics is about a person meeting a moment, and this is Elizabeth Warren’s moment. The defining fight in American politics right now is about soaring inequality and a system where Wall Street and special interests can write the rules to benefit themselves. And that is the defining fight of Elizabeth Warren’s life. She was made for this moment in American history, and that’s why wherever she goes in the country, she brings giant crowds to their feet. We need her in this presidential race, we think it’ll make whoever the nominee is stronger, and we think she’d be an amazing president.”

“Her campaign against this bill, which would relax some regulations on derivatives, is one of a series of moves Warren has made over the last month to urge Democrats to shift to the left, not the political center, in the wake of the drubbing the party took in last month’s elections.”

“Warren, on the other hand, has seen her liberal stock rise even higher in recent days. Her fury over the ‘cromnibus’ bill has further inspired her supporters, as has her loud opposition to Antonio Weiss, a presidential nominee for a Treasury Department post who has ties to Wall Street.”

“But even if Warren doesn’t run, the energy that exists to draft her is still worth having because it gives her power, it gives her relevance, and it can absolutely be used to moderate the forces on the right.”

“Senator Elizabeth Warren lost her battle over the government spending bill. But she ended the week a winner.”

“Elizabeth Warren Was Told to Be Quiet, But She Didn’t, and It’s Paying Off” — The Washington Post’s Zachary A. Goldfarb

“And if the past few weeks are any indication, she can operate as an insider without giving her up outsider credentials. She’s remained outspoken, but has become even more influential.”

“Warren’s profile has never been higher, both in and outside the Senate. … For Warren, the real payoff is most likely inside the Capitol, where the outside pressure and enthusiasm for her help has strengthened her role as a leader of the progressive wing of the Democratic caucus.” 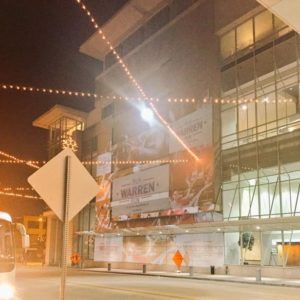