ROBERT REICH SAYS RUN WARREN RUN: Adding his name to the long list of those hoping for a Warren run, former Labor Secretary Robert Reich said via Facebook that he hopes to see a contested primary and wishes Elizabeth Warren were in the race. 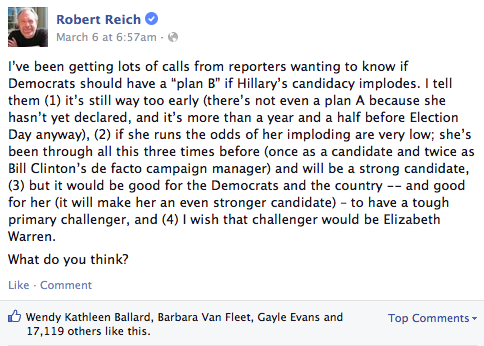 The Nation’s John Nichols highlighted Reich’s respect for Warren and their shared positions on many issues, including income inequality.

“This is more than just an expression of ideological sympathy, and more than punditry. This is a former Bill Clinton cabinet member saying, specifically, that he hopes Warren will run.”

USA Today’s Catalina Camia notes that Reich voiced a desire to have candidates talking about crucial economic issues on a Democracy for America call last year, suggesting Warren could be that candidate. The Washington Post’s Aaron Blake has more on the 2014 call:

“I think, though, if we don’t get a candidate or a set of candidates in 2016 who are taking this issue with the seriousness it needs to be taken, I think that there will be a lot of people — Elizabeth Warren, others, maybe even me — who will toss our hats in the ring, because it has to be addressed,” Reich said.

“Reich understands the system is rigged in favor of the rich and powerful and knows that having Warren in the race, speaking truth to that power, will ultimately strengthen the Democratic Party and our democracy..” —Ready for Warren’s Erica Sagrans 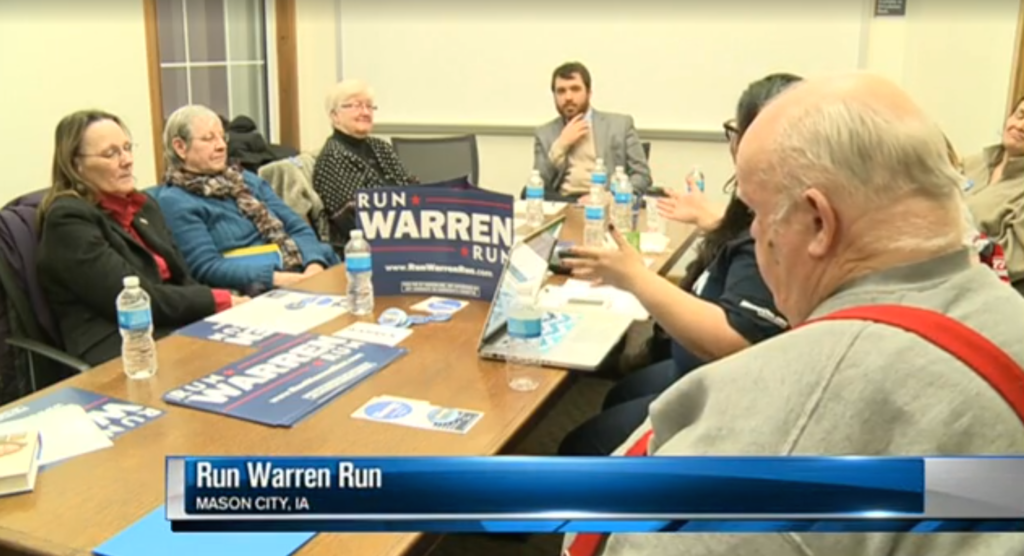 ICYMI: WARREN MARCHED FOR SELMA 50TH: Alongside Rep. John Lewis and thousands of others, Warren marched across the historic Edmund Pettus Bridge for the 50th anniversary of Bloody Sunday. 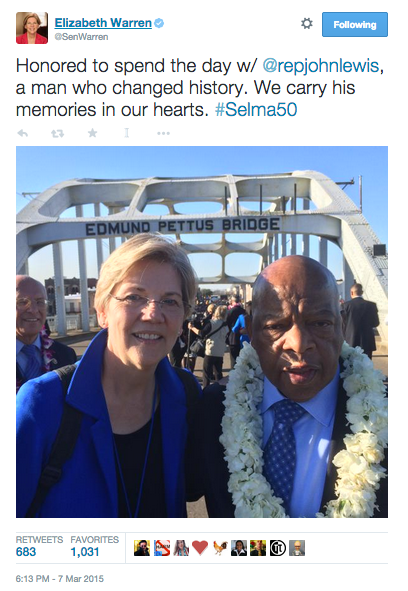 See more tweets from Sen. Warren over the weekend.

‘LET WARREN SHAKE UP CAUCUS CAMPAIGNS’: In a letter to the editor in The Quad City Times, supporter Karene Nagel encourages voters to educate themselves on Elizabeth Warren’s fight for the middle class. Citing Warren’s tussles with Wall Street, Nagel urges others to join the effort:

“Sen. Warren will take on all the big cats. She has the smarts and the steam to actually level the playing field for the 90 percent. I want her leadership in the White House and encourage everyone to learn more about her. Then join us at Run Warren Run.”