MONTANA — Montana members of MoveOn.org Political Action have voted overwhelmingly to endorse Rob Quist in the U.S. House special election in the state with 99% of votes cast in favor of backing Quist, and praising Quist’s progressive policy agenda, including his commitment to protect the Affordable Care Act and fierce opposition to repeal efforts. The special election is to replace Republican Rep. Ryan Zinke, who resigned after being appointed Secretary of the Interior.

Quist, a lifelong Montanan and well-known folk and bluegrass musician, has emerged as a strong progressive candidate and a vocal critic of the current Republican plan to dismantle the Affordable Care Act. Quist has also served as a cultural ambassador to Kumamoto, Japan through the state’s commerce department and served for more than a decade on the Montana Arts Council, leading an effort to implement anti-bullying and art programs in the state’s public schools.

MoveOn’s endorsement of Quist builds on an endorsement by MoveOn members in Georgia of Jon Ossoff in showing that, if Republicans advance efforts to repeal the Affordable Care Act or advance Trump’s dangerous agenda, they’ll pay a political price.

This week, House Republicans are expected to rush through a bill that would be a disaster for Montana. Studies have shown it would raise premiums by up to $12,000 for older Montanans and take away health coverage from an estimated estimated 75,000 Montanans.

“Rob Quist understand Montana better than any other candidate in this race, and he knows what a disaster the current Republican plan would be for Montanans,” said Ilya Sheyman, executive director of MoveOn Political Action. “This race is just the latest to show the huge grassroots outpouring of energy we’re seeing across the country resisting the Republican plan to dismantle health care. If Republicans like New Jersey multi-millionaire Greg Gianforte think they can take away health care from 24 million Americans (including over 75,000 Montanans) without facing the consequences, they’re dreaming.”

Here’s what a few MoveOn members in Montana has to say about Quist:

“Rob is progressive who will represent Montanans with honesty, compassion, and a vision for economic justice. He also brings an outsider’s appeal to those disenchanted with politics as usual.” –Linda B. in Helena

“Rob supports health care for all, Social Security, Medicare and Medicaid. He supports public access to public lands, conservation, and initiatives to mitigate the effects of climate change. He supports public education. He is pro-choice. He supports funding for the arts and arts education. He understands the concerns of Montana’s rural citizens and is running for Congress to represent the people, not corporate interests. Flipping this seat, in a “red” state, would drive the momentum of progressives across the country. Endorse Rob Quist!.” –Shannon H. in Whitefish

“Rob is someone who appeals to, and understands, a wide swath of the complex Montana voter. We have very conservative and very liberal folks who all agree on public lands, caring for the elderly, children, and veterans, and respecting what we think of as the “Code of the West”. He is one of us—which means so much in Montana.” –Marni E. in Billings 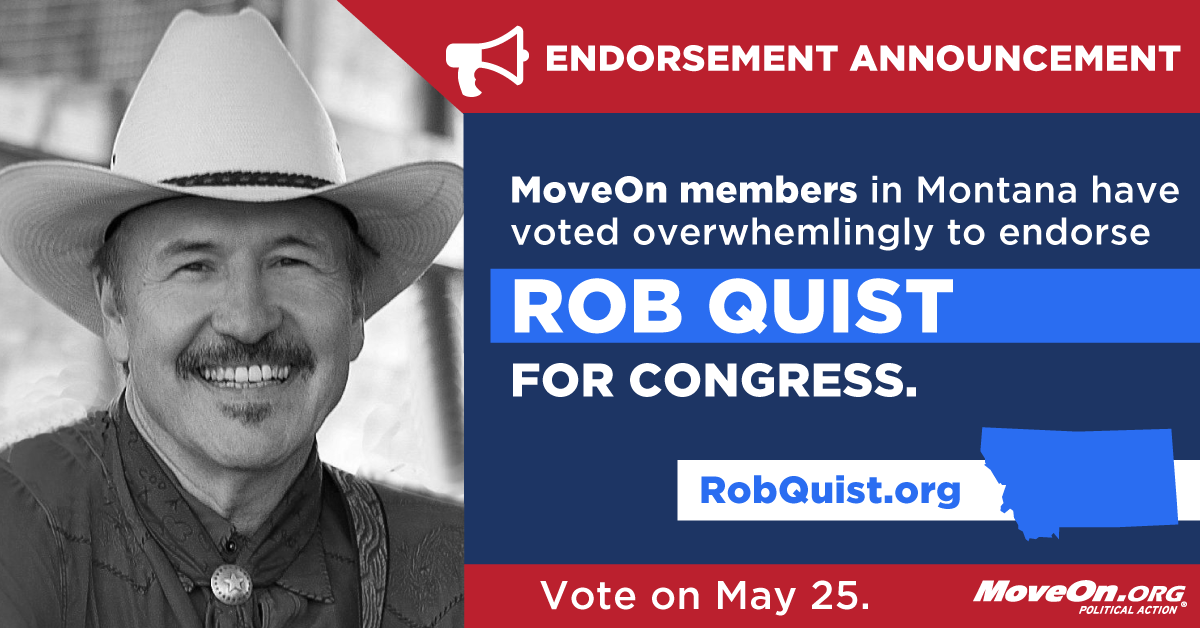 Republican Greg Gianforte and Libertarian Mark Wicks each earned less than 1% of votes cast.MoveOn.org Political Action represents the collective will of MoveOn’s members at the ballot box by helping to elect progressive candidates.