Donald Trump may control the White House for the moment, but we are not giving up on what this country can be. And on Presidents Day, tens of thousands of MoveOn members and allies hit the streets to build a vision of a country where all people—including those seeking asylum, immigrants, Muslims, and Black and brown communities—can fully thrive. A country where we won’t be pitted against each other for any politician’s agenda. A country where no president can place himself above the law.

From Cambridge to Boise, D.C. to Austin, Atlanta to Missoula, New York City to Honolulu, Cape Girardeau to Seattle, protestors came together to show that we will not stand for Trump’s fake national emergency in order to advance his anti-immigrant agenda.

Trump’s fake national emergency is just the latest in his planned, orchestrated series of attacks—from ending DACA to the Muslim Ban to family separation—designed to enact his racist policies. And Trump is grossly over-reaching and shredding the Constitution in order to advance his white supremacist agenda.

But we were ready. Thanks to a network of MoveOn member hosts, many of whom have been training and preparing for over a year for a moment like this, we were able to show up in force and push back.

Watch and share this video from the Presidents Day actions:

This enormous undertaking was also only possible because coalition partners around the country, including MoveOn, the ACLU, Win Without War, and CREDO, who have been planning together to be ready to mobilize in a moment such as this for over a year. And partners, including United We Dream, Indivisible, PFAW, CPD, SEIU, AFT, AFSCME, NEA, Sierra Club, ResistBot, and over 100 more allies, joined forces in the crucial hours and days after Trump’s announcement.

That’s how—with just 72 hours notice—we were able to do the impossible. 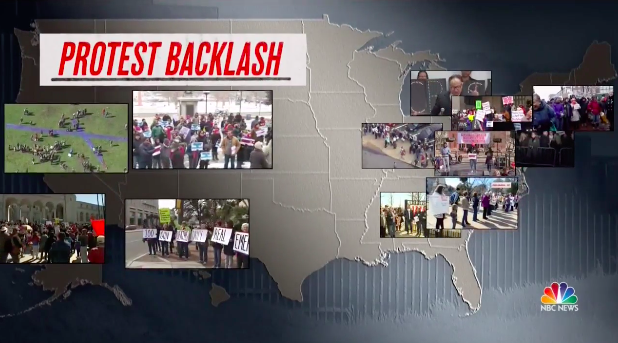 Tens of thousands of us sent the message loud and clear to Trump that we will not tolerate him building walls, banning Muslims, or attacking immigrant, Muslim, and Black and brown communities. And we won’t let him get away with asserting he can unilaterally place himself above the law.

We were also joined by members of Congress—including Reps. Ayanna Pressley (MA), Maxine Waters (CA), Pramila Jayapal (WA), Jerry Nadler (NY), Jan Schakowsky (IL), Joaquin Castro (TX), amongst others—who joined protests in their home states. And the entire world seems to be watching too. There was even a solidarity protest all the way in Barcelona, Spain!

The fight isn’t over to defend and protect communities that have been under attack during the Trump Administration, but, together we’ve shown the power that we carry.

At this point, Trump could be in office for another two years. The damage he could do in that time is enormous. But when the entire progressive movement stands up together, we can force Congress to act, mitigating the damage.

And that’s not all: A grassroots army like ours means that once Democrats finally hold power, they will have a mandate that we helped established and a powerful base of activists (that’s us) who will ensure they enact the progressive policies we need to create the world we want to live in.