GEORGIA — Georgia members of MoveOn.org Political Action have voted overwhelmingly to endorse Jon Ossoff in the U.S. House special election in the state’s 6th District with 93% of votes cast in favor of backing Ossoff, praising Ossoff’s commitment to protecting the Affordable Care Act.

The election is to replace former Rep. Tom Price, who was tapped by Donald Trump to spearhead the repeal of the Affordable Care Act as Secretary of Health and Human Services. Ossoff has emerged as a strong, vocal supporter of the Affordable Care Act and is earning the support of progressives nationwide, including civil rights icon Rep. John Lewis.

“That this historically Republican district is now very competitive is another example of the powerful grassroots energy we’re seeing across the country resisting Trump’s agenda,” said Ilya Sheyman, executive director of MoveOn.org Political Action. “Ossoff is the sort of progressive champion—strong on both racial justice and economic justice—who can channel that resistance energy into progressive volunteers and votes, and Republicans have done him a big favor with their plans to repeal the ACA and kick tens of millions of people off of their health care. Republicans in Washington are attempting to take away health care from millions, including an estimated 30,000 in Georgia’s 6th. If Republicans move forward with repealing the ACA, they’ll pay a political price in districts like this one for supporting Trump’s dangerous agenda.”

MoveOn will be mobilizing its more than 15,000 members in Georgia’s 6th District to volunteer and vote for Ossoff and will be mobilizing progressives across the country to support the campaign through thousands of grassroots donations.

Here’s what a few MoveOn members in the district had to say about Ossoff:

“I believe Jon Ossoff is committed to protecting our environment, supporting civil rights and women’s rights, ensuring that health care coverage is available to all Americans, and representing Democratic values in Washington.” –Maggie T., Roswell

“He supports Planned Parenthood and women’s rights. He supports affordable healthcare. He has John Lewis’s endorsement which speaks volumes to me.” –Ginelle H., Roswell

“Jon Ossoff is a talented, principled anti-corruption investigator and a breath of fresh air for GA6, which has been complacent for too long with Tom Price’s leadership. Electing any Democrat – but particularly a young, progressive, articulate one – will send a message to Trump and the Republicans that the country, including areas they presume to be their base, is watching, angry, and ready, and that the Resistance is to be taken seriously.” –Kimberly L., Atlanta

“Jon O’s entire career has been about justice for the marginalized by standing up against crime and corruption. He has experience on the Hill. He has pledged to get affordable healthcare for all Americans, to protect seniors Medicare and Medicaid, to protect civil liberties, and women’s rights to reproductive freedom. He’s on the right side of the climate debate.” –Teresa L., Johns Creek 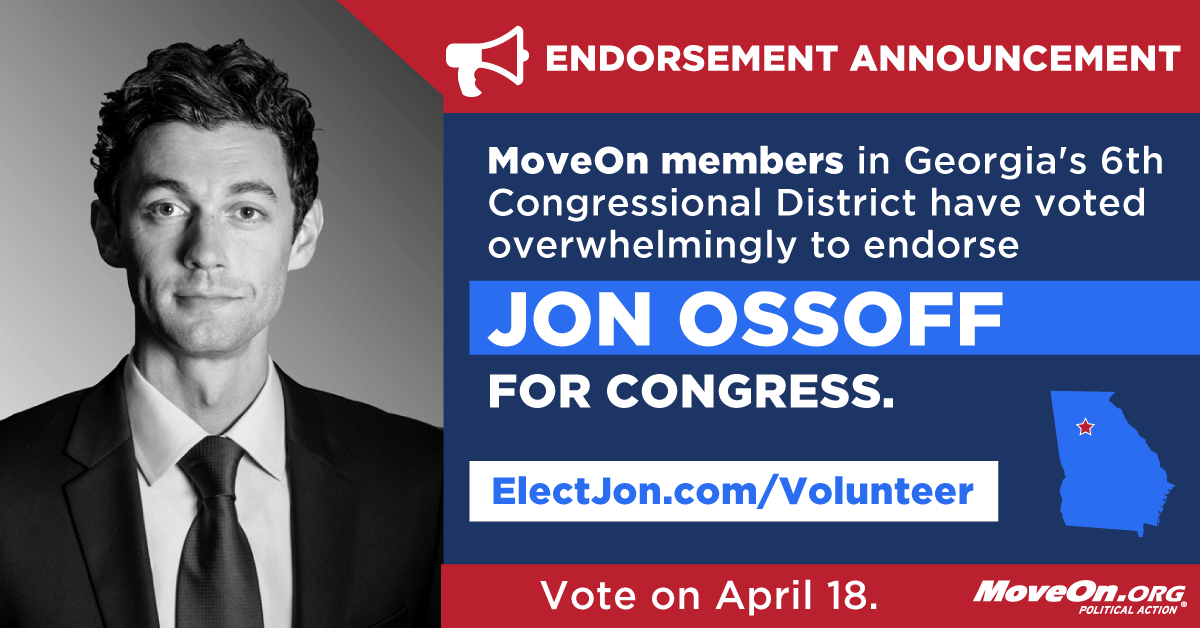