More than 100 activists with netroots groups MoveOn.org, Free Press, CREDO, Color of Change, Demand Progress, and others gathered Wednesday morning outside President Obama’s visit to a wealthy neighborhood of Silicon Valley, the epicenter of the tech industry, with that chant—catching the attention of the President’s entourage, local and national media, and hundreds of morning commuters en route to their tech jobs. (Full list of press hits below).

At issue? President Obama is sitting on the sidelines while the FCC chair that he appointed moves ahead with a plan that would kill the Internet as a level playing field for all. He has a choice—allow the FCC to do the bidding of Verizon and Comcast and oversee the death of the open Internet, or use his political megaphone to call for the real solution: treating the Internet as a public utility. 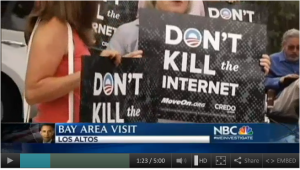 A coalition of young people, people of color, and women—who used the open Internet in new and innovative ways to organize people to engage in politics–propelled President Obama to office in 2008 and 2012. Since his first campaign, President Obama has promised to preserve the open Internet that helped him get elected and that every American relies on to access information, start a new business, and compete on a level playing field–but he has yet to address the issue this summer or push for the FCC to preserve true “Net Neutrality” by treating broadband Internet as a public utility.

“Without a free and open internet, we couldn’t have created Color of Change,” James Rucker–founder of the online group that formed in the wake of Hurricane Katrina to strengthen the political voice of Black America—told the assembled crowd. 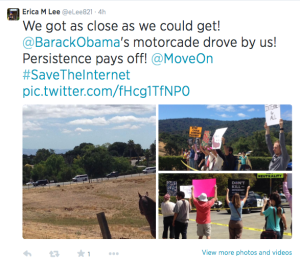 As I’m writing this, Net Neutrality activists in Los Angeles are gathering near the president’s next stop—he’s scheduled to arrive Wednesday evening for another fundraiser, at the of home Hollywood producer Shonda Rhimes, who is herself a Net Neutrality advocate. 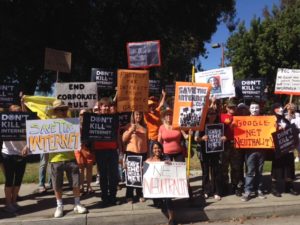 NBC Bay Area: Not Everyone in Silicon Valley Happy to See President Obama

KTVU: President Obama to arrive in Bay Area for fundraiser

Menlo Park-Atherton Patch: President Obama Arriving in the South Bay for a Fundraiser