New polling out today from Lake Research Partners shows that Republican Senate Minority Leader Mitch McConnell (R-KY) faces a disapproving Kentucky electorate which places his 2014 bid for reelection in serious jeopardy.  The survey–the first of its kind conducted in the wake of the government shutdown–indicates that the vast majority of likely voters in Kentucky do not plan to re-elect Senator McConnell, and most gave him a negative job performance rating. Faced with challengers in both the primary and general elections, the poll shows that Sen. McConnell’s re-election is in serious peril.

The new survey, commissioned by MoveOn.org Political Action, found that Sen. Mitch McConnell’s personal favorability ratings were underwater, with only 42% giving him a rating of favorable, while 52% gave him an unfavorable rating, with twice as much intensity on the negative side.

Even more telling is the fact that survey respondents gave him a strikingly negative job performance review with just 29% rating it as excellent/good, and 68% saying it is fair/poor. When presented with the question of re-electing McConnell, considering someone else, or replacing him, 43% said they prefer to replace him outright, while just 27% plan to re-elect him.

“Mitch McConnell is the embodiment of everything wrong in Washington D.C. He’s focused on obstructing President Obama to the point of being reckless with the economy. He’s voted against raising the minimum wage nine times, and he’s willing to cut Social Security and Medicare benefits for our most vulnerable Americans — yet he has voted repeatedly to increase his own pay and to provide lifetime health care for politicians. Make no mistake: this latest poll proves Mitch McConnell is beatable in 2014 — and nearly 70,000 MoveOn members in Kentucky are committed to retiring him next year.”

The poll was featured on the front page of the Huffington Post, and in Politico, The Hill, Roll Call, and on CNN. 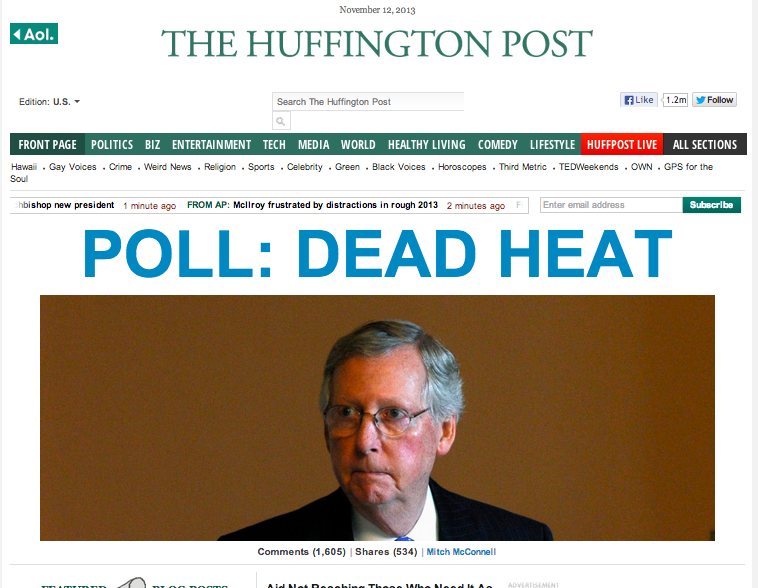