Milwaukee, WI — As Wisconsin tunes into Game 3 of the NBA Finals Sunday night, the Milwaukee Bucks’ first Finals home game in 47 years, they will also see MoveOn Political Action’s new TV ad on why they should #BenchRonJohnson.

The :30 ad highlights just a few of the many times Ron Johnson has been “dunked on” for hurting his constituents by embracing fringe conspiracists, which is why the Milwaukee Journal Sentinel editorial board has called him, “…not fit to be your senator.”

The ad will air throughout the state during ABC’s broadcast of the game.

“From fueling conspiracy theories about vaccines to continuing Donald Trump’s Big Lie to defending those who stormed the Capitol to standing in the way of the economic relief that the people of Wisconsin need, it is clear that it’s time for Ron Johnson to go, ” said Rahna Epting, Executive Director of MoveOn Political Action. “MoveOn members throughout the state will be using the NBA Finals to send a clear message that it is time for Wisconsinites to #BenchRonJohnson so Wisconsin can have a Senator who looks out for them, instead of wealthy donors and conspiracy theorists.”

In addition to the T.V. ad, basketball-themed mobile billboards, digital ads, and trading cards are also being shown to WI residents during the game, using the hashtag “#BenchRonJohnson,” to further spotlight the need for Johnson to go. An aerial banner enlisting Wisconsinites to #BenchRonJohnson will fly over downtown Milwaukee Sunday ahead of tipoff. 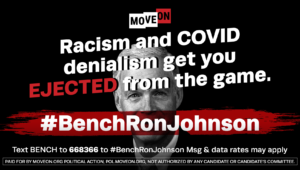 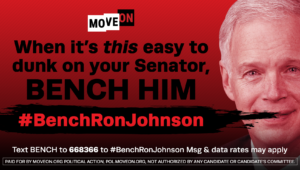 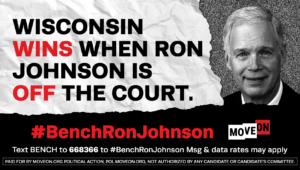