The results are in: With 77% of votes cast in favor, MoveOn members in Minnesota’s 5th District have voted overwhelmingly to endorse Ilhan Omar for re-election to Congress!

Rep. Omar is a uniquely powerful, compelling member of Congress. She ran on a platform of ending fossil fuel subsidies and joined in on the Green New Deal fight once in office. She ran on ending the horrific Muslim Ban, which is separating families—and she’s now cosponsoring the #NoBanAct, which would make sure this never happens again. And despite racist and anti-Muslim attacks to silence the first Black, Muslim congresswoman in the United States—and blatant attempts to incite violence against her and Muslim communities—Rep. Omar has continued to speak out for bold, progressive policies in order to fight for a society where all of us, not just the rich and powerful, can thrive.

Want to show that you stand with Rep. Omar and an inclusive, equitable, transformative vision of America—and to send a message against the rise of anti-Muslim bigotry, rhetoric, and policies in the U.S. and around the globe? Click here or on the image below to get your FREE “I Stand With Ilhan” sticker. 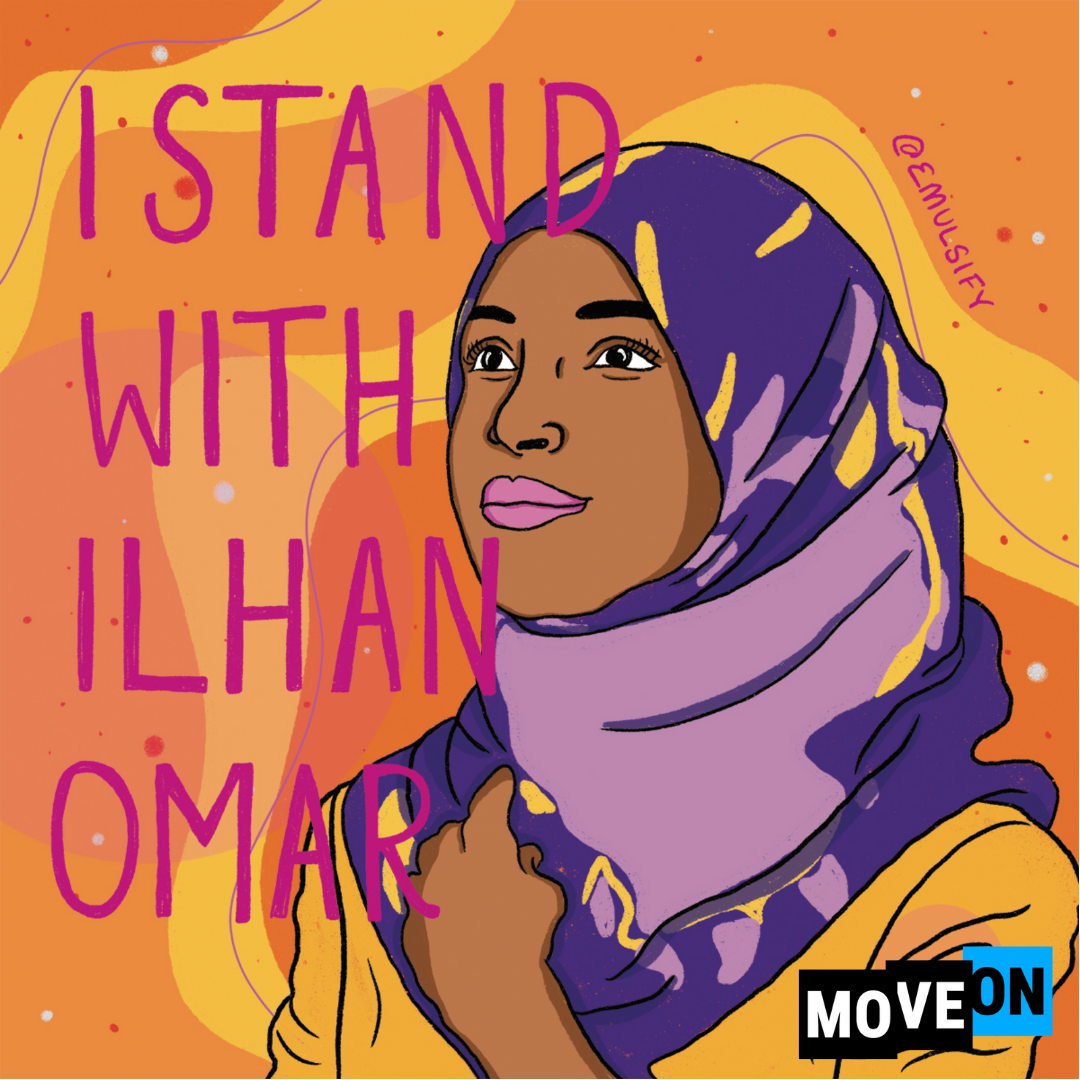 Here’s what some of the more than 16,000 fellow MoveOn members in Minnesota’s 5th District had to say about why they support Rep. Omar for re-election:

“Rep. Omar represents the future of America. An America that is inclusive regardless of race, religion, gender, or economic status. She is powerful and incredibly intelligent. Her personal history and life inform a responsible and open view of the future of our country. She IS America.” – Erin from Minneapolis

“Ilhan is not afraid to say things that need to be said. She’s got the gumption to stand behind what is right, instead of what is politically correct or self-serving. She is exactly what we need in a representative. She has courage that I haven’t seen in a while.” – Micah from Minneapolis

“Ilhan Omar is one of the few representatives that is focused on economic justice. She has also been on the receiving end of unfair attacks from right-wingers and centrists alike, and she needs as much support as she can get from progressives to continue fighting for us.” – Kenneth from Minneapolis

“She is courageous and speaks her truth. Her identity as a woman of color, a refugee, and an immigrant is essential to bring understanding and empathy to all the multiple kinds of people who make up the citizenry of the United States. Her values reflect her constituency. I am fortunate to live in her district.” – Lauren from Minneapolis

Celebrate this first endorsement of the 2020 elections and claim your FREE “I Stand With Ilhan” sticker. Or, order one for your family member or friend who would appreciate it. 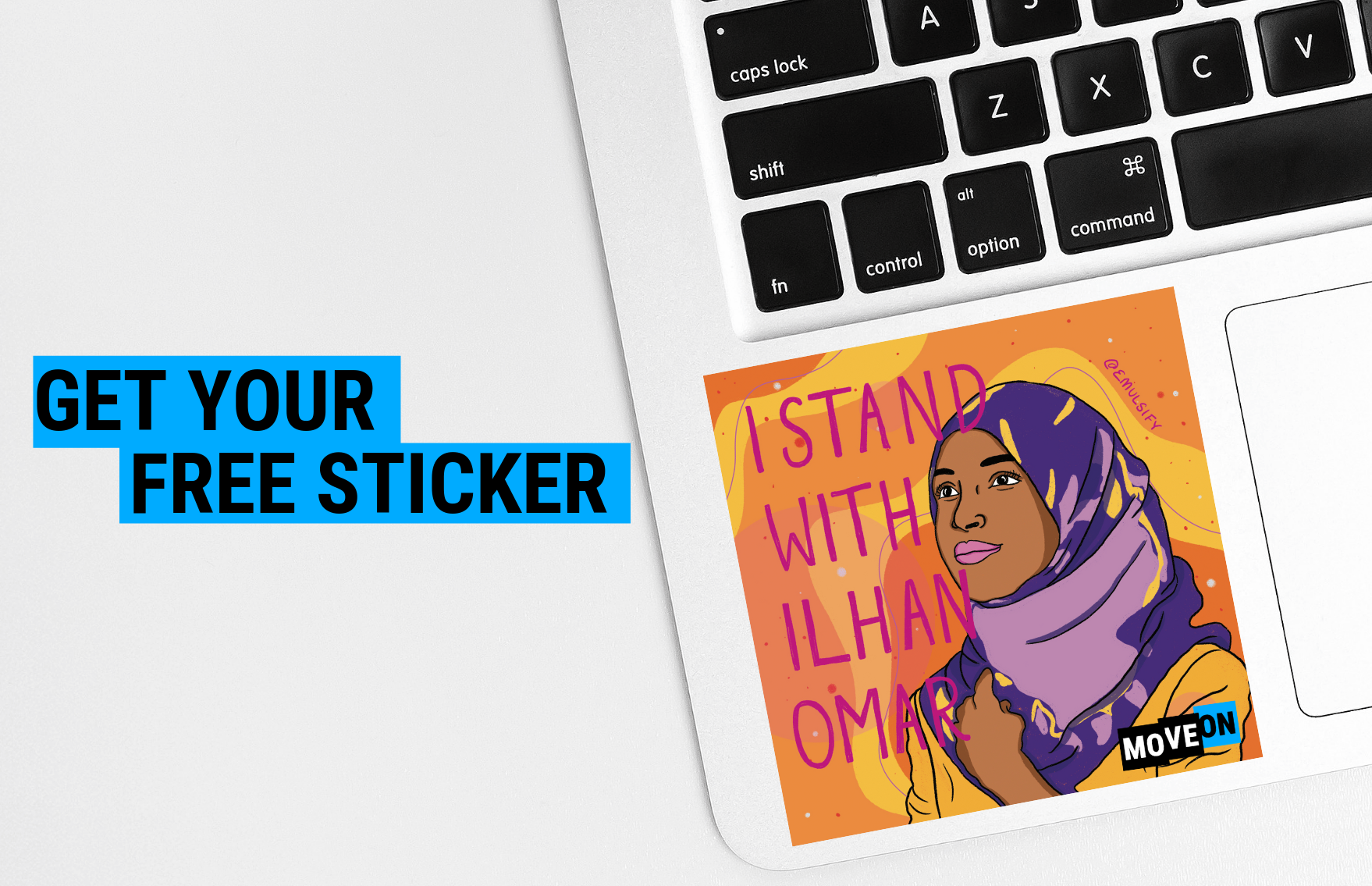 We don’t usually send out announcements like these outside of the district where constituent MoveOn members voted to make the endorsement. But in this case, given the way that Rep. Omar’s leadership is playing out in a national context, and given the intensity of national attacks aimed at her, we wanted to share out our first 2020 endorsement with all MoveOn members. During an era when moral clarity is of the utmost importance, we want to make it clear that Rep. Omar is definitely an important voice in Washington, D.C.—and in the country.

She is a progressive champion on democracy reforms, challenging the military-industrial complex, taking on white supremacy, and standing for the rights of immigrants, asylum-seekers, and refugees. She herself is a refugee, a mother, and the first-ever Black, Muslim woman to serve in the House.

The positive and bold progressive vision for our country that Congresswoman Ilhan Omar fights for every day is one that should be embraced by candidates everywhere—especially heading into 2020. Her fearlessness in advocating progressive policies is galvanizing the public in her district and throughout the country.

Claimed your free sticker yet? If no, click here to get it now and put it out in the world boldly.

MoveOn is proud to “Stand With Ilhan” as our first endorsement of the 2020 election cycle.