MoveOn’s endorsement comes ahead of the May 22 primary for Texas’ 23rd Congressional District.

“MoveOn is focused on winning a progressive majority in the House in 2019, and that includes supporting Democratic candidates running on populist and inclusive platforms everywhere Democrats are ready to compete,” said Ilya Sheyman, executive director of MoveOn.org Political Action. “Gina Ortiz Jones will help steer the Democratic Party in a more progressive direction in 2019 and beyond with support for priorities including Medicare for All, the Dream Act, and other economic and racial justice issues.”

Gina Ortiz Jones has dedicated her life to public service. As a veteran, a member of the LGBTQ community, and a first-generation American, she would bring a unique perspective in Congress that’s sorely missing and fight for progressive values like health care for all. A victory by Gina Ortiz Jones in November would dramatically increase the chances of winning back Congress for the Democrats.

MoveOn has thousands of members in Texas’ 23rd Congressional District who will mobilize to volunteer and vote for Jones.

Here’s what a few MoveOn members in Texas’ 23rd Congressional District had to say about Jones:

“I believe Gina will be the leader we need representing our concerns and she has the courage to fight hard in congress in holding them accountable when they try to take away opportunity. We need someone like Gina and already she is standing strong to her convictions by action.” – Diane from San Antonio, TX

“We should support her, because she is a Veteran. Veterans have a unique set of values, standards and special input on military engagements all over the world. She has proven she can handle a high pressure setting. As a veteran myself, I want someone representing me who knows what the military have to go through and not be so quick to approve a vote for war—and will act in the best interests of protecting veterans benefits, Social Security, and Medicare.” – Aida from Eagle Pass, TX 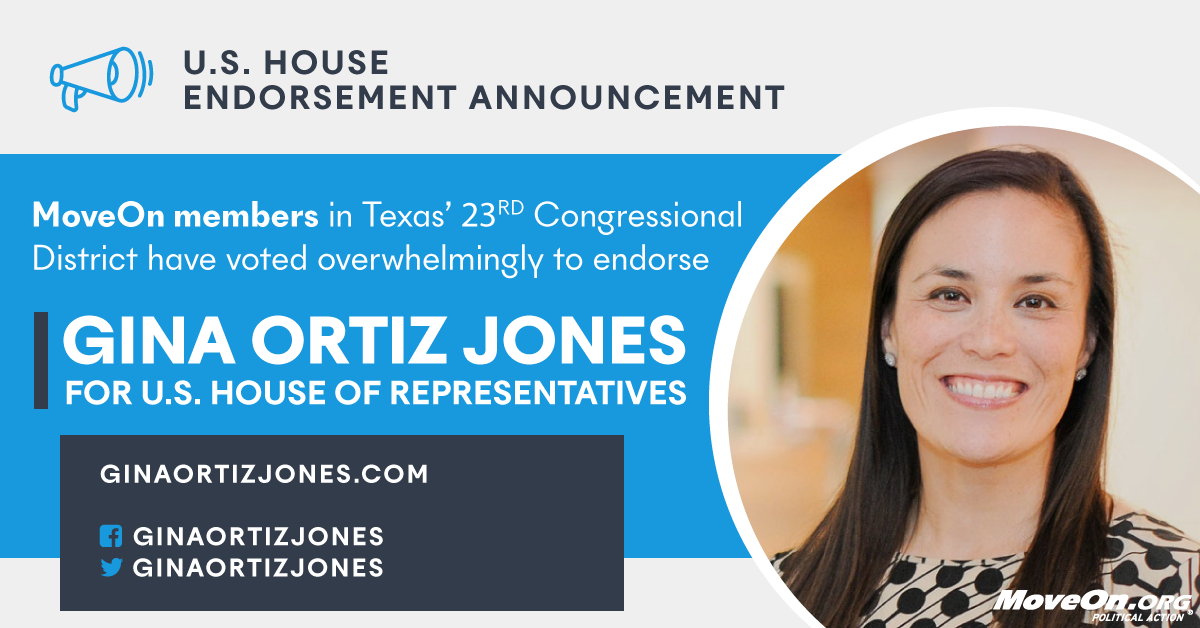