MoveOn: Building on Resistance wins in Alabama and Virginia, MoveOn members focus on winning power up and down the ballot in 2018.

A native of El Paso and a fourth-generation Texan, O’Rourke was elected to represent his hometown and the 16th district in the U.S. House in 2012, winning in a race against an eight-term incumbent. Previously, he served two terms on the El Paso City Council and started a technology company. As a Representative, O’Rourke serves on the House Committees for Armed Service and Veterans Affairs, has introduced the No PAC Act, to end candidates’ reliance on PAC funding, and has worked to ensure veterans have access to health care.

“Building on the historic results in the Alabama Senate election this week when Doug Jones became the first Democrat to win statewide in more than 20 years—and on the wave of progressive wins in Virginia last month—MoveOn members in another red state are stepping up to make history and win back power,” said Ilya Sheyman, executive director of MoveOn.org Political Action. “Ted Cruz has been a disgrace to the state of Texas and the entire country, and Texas voters have a clear alternative in Beto O’Rourke who is refusing to take money from PACs, supports universal health care, and is building an amazing grassroots campaign that can win. Winning this race in Texas would be an incredible blow to Trump’s agenda — and it would send an unmistakable message, just like Alabama, that with good candidates who stand with us on the issues, we can win anywhere.”

MoveOn will mobilize its 258,000 members in Texas to volunteer for O’Rourke.

Here’s what a few MoveOn members in Texas had to say about O’Rourke:

“Beto O’Rourke is committed to grassroots organizing and an inclusive, progressive agenda. Ted Cruz is a liar fueled by fundamentalist religiosity and superpacs. Beto O’Rourke could help to steer Texas and America toward a sustainable future for all Texans. #betoforsenate” —Molly C., The Woodlands, TX

“Beto is a compassionate man who truly has everyone’s best interests in mind. He works tirelessly meeting with people to learn what their concerns are. I can’t believe we have to ask for candidates who are decent human beings but in the age of Trump it’s necessary. Beto is absolutely who I want representing me in Washington DC.” —Cathy C., Grand Prairie, TX

“Beto O’Rourke will bring a fresh perspective to the Senate that is desperately needed. As a Texas resident, I can attest that Ted Cruz does not truly represent the majority of Texas voters with his outdated and fringe perspectives and ideologies. Texas voters are looking for change and Beto O’Rourke is it!” —Tiffany L., Austin, TX 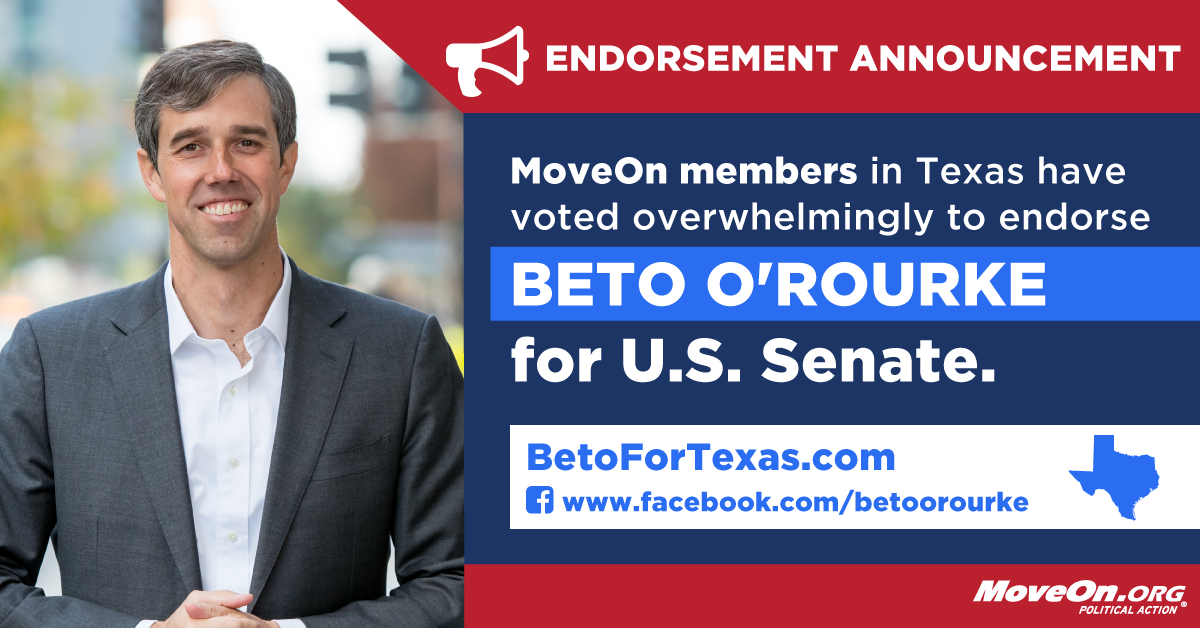