“Daniel’s people-powered campaign is building momentum from Chicago to Champaign to East St. Louis. He’s running on a bold vision for a massive change to Illinois politics and economy. One that puts middle-class values and families first, not the billionaires and big corporations,” said Ilya Sheyman, executive director of MoveOn.org Political Action in an email to Illinois MoveOn members. “His support for single-payer health care, tuition-free public universities, fixing a broken criminal justice system, and making sure the wealthy pay their share is a recipe for energizing the broad coalition it’ll take to beat Bruce Rauner in the fall.”

MoveOn will mobilize its 265,000 members in Illinois to volunteer and vote for Biss.

Here’s what a few MoveOn members in Illinois had to say about Biss:

“I like that Biss has talked about supporting public schools and that he sends his kids to public schools. I like he is a middle class candidate who is not using his own pocket money to fund a campaign. No more millionaire candidates. I feel he will really understand the needs of the middle class while working for all of Illinois.” —Kate from Chicago

“Daniel and Litesa are the only ticket with two active records of progressive legislative experience. Looking at what they’ve been able to accomplish while Rauner has been in office, I feel so much more confident about what they can do to reform Illinois once he’s voted out!” —Sara from Brookfield

“Daniel Biss brings progressive values, creative thinking, consensus building and real, in-the-trenches government experience to his campaign. He left his profession as Math professor at the University of Chicago to become a community organizer, and has since served both in the Illinois House and Senate. He is a man of the people and for the people, not buying his candidacy because he is a billionaire. He is a candidate so worthy MoveOn’s support.” —Rebecca from Champaign

“Of all the candidates running for governor Daniel is the only one with legislative experience. I feel that he will represent the interest of working families like mine. I have donated both time and money to this campaign, even though I do not normally give to political campaigns. I believe that strongly in him.” —Giovanna from Rockford

“Because Daniel is a breath of fresh air – well-educated, fighting for those whose voices are typically ignored (elderly, disabled, immigrants and more). When he speaks, he engages you, speaks to you and not down to you. I think everyone can identify with Daniel. He has a clear story of inspiration that has guided him down this path. He expects accountability – even for himself. This is our next governor.”—Tonna from Carpentersville

“I’m proud to receive MoveOn’s endorsement,” said Daniel Biss. “When I first got involved in grassroots organizing in response to the Iraq War, I fell in love with the idea that we can fundamentally transform our communities when we unite around a common vision. That belief inspired me to run for office for the first time a decade ago, to organize around progressive reform in the state legislature, and to take on wealthy, establishment candidates as I run a grassroots campaign for governor now. MoveOn was founded with this same faith in people-powered politics and has earned a reputation nationwide for backing true progressive candidates and amplifying the voices of voters, both on the ground and through innovative digital tools, to break through the noise in an era of unprecedented election spending. I’m excited to partner with MoveOn to mobilize Illinois voters in this election, and to fight for progressive reform in the years ahead.” 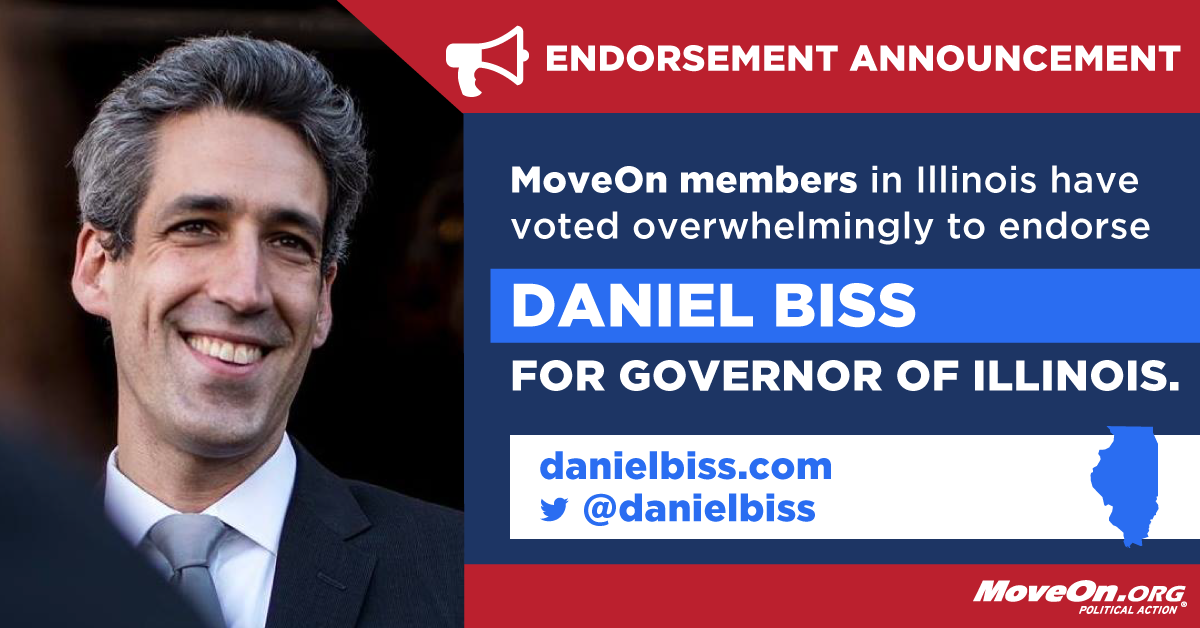 Here are the final vote totals from Illinois MoveOn members: