ST. LOUIS, MISSOURI — The overwhelming majority of votes cast by St. Louis-based members of MoveOn.org Political Action have been cast to endorse Tishaura Jones in the city’s upcoming Democratic mayoral primary.  Jones is one of seven Democratic candidates currently running to succeed St. Louis Mayor Francis Slay.  Jones won the support of more than 66% of voting MoveOn.org Political Action members in the city. 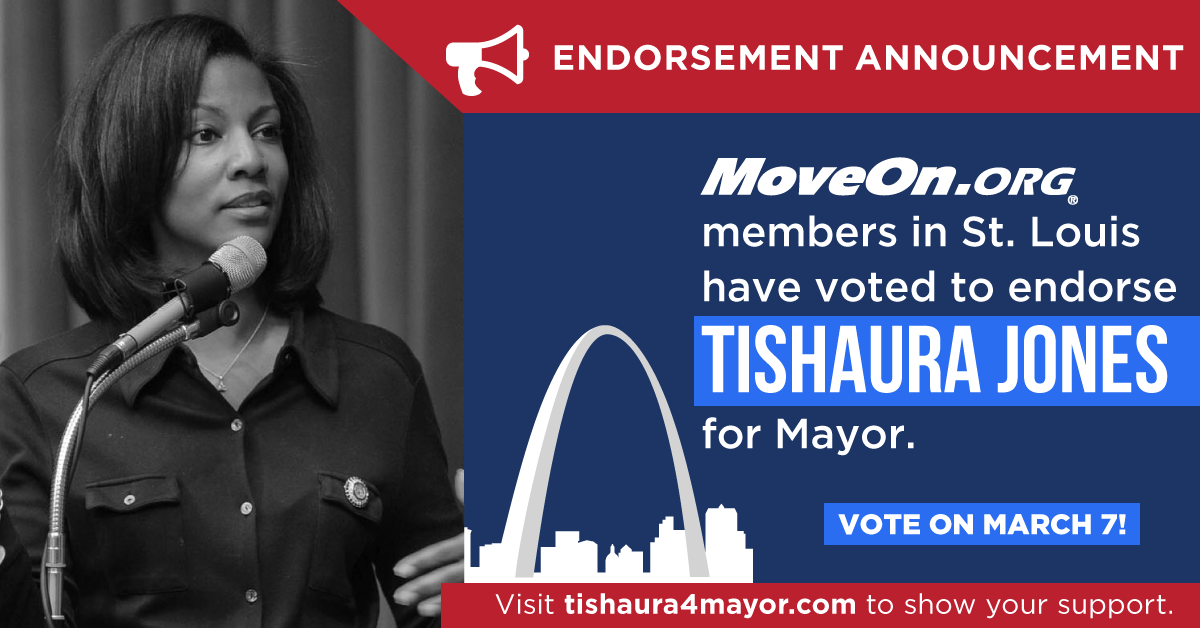 “Jones is an exciting candidate who represents the future of the Democratic Party,” explained Ilya Sheyman, executive director of MoveOn.org Political Action.  “MoveOn members are impressed by Jones’ powerful campaign fighting for all the people of St. Louis.  We know that we can trust Tishaura Jones to be on the frontlines in resisting Donald Trump’s agenda.  We are proud to endorse Jones for mayor and will work to make her campaign successful.”

“MoveOn is one of the most effective and passionate advocates for change in our country. I am proud to have earned its endorsement and I welcome its formidable foot presence to my campaign team,” said Tishaura Jones of her endorsement by MoveOn.org Political Action.

MoveOn has more than 19,000 members in St. Louis.  Here’s what a few MoveOn members in the city had to say about Jones:

“Tishaura Jones is the only candidate in the race who has articulated a detailed progressive platform and shown herself to be a progressive in word and deed. I believe that Tishaura has the experience and vision to lead St. Louis in a more progressive direction.” — Amanda S.

“She understands the whole community she serves and is for real progress and change. She isn’t afraid to get granular with changes, as treasurer she took on predatory lending and established financial education programs to combat it. She wants to change our city based on the learnings of the Ferguson Report, helping our community from the bottom up.” — Elizabeth H.

“St. Louis’ primary problems are the divides between our citizens along racial and class lines. Ms. Jones seems to be addressing those divisions the most clearly. She has plans for evaluating proposed projects for our city, and they don’t involve serving the rich.” — Christine O.

“I believe Tishaura Jones has the vision to bring St. Louis both together, and into the future. She has been innovative in her current role and has been looking for models of city governance around the country that can be plugged into our city with some customization. Addressing our blighted areas, poverty, and race issues, while positively leading us forward away from special interests. She will try new things.” — Richard H.