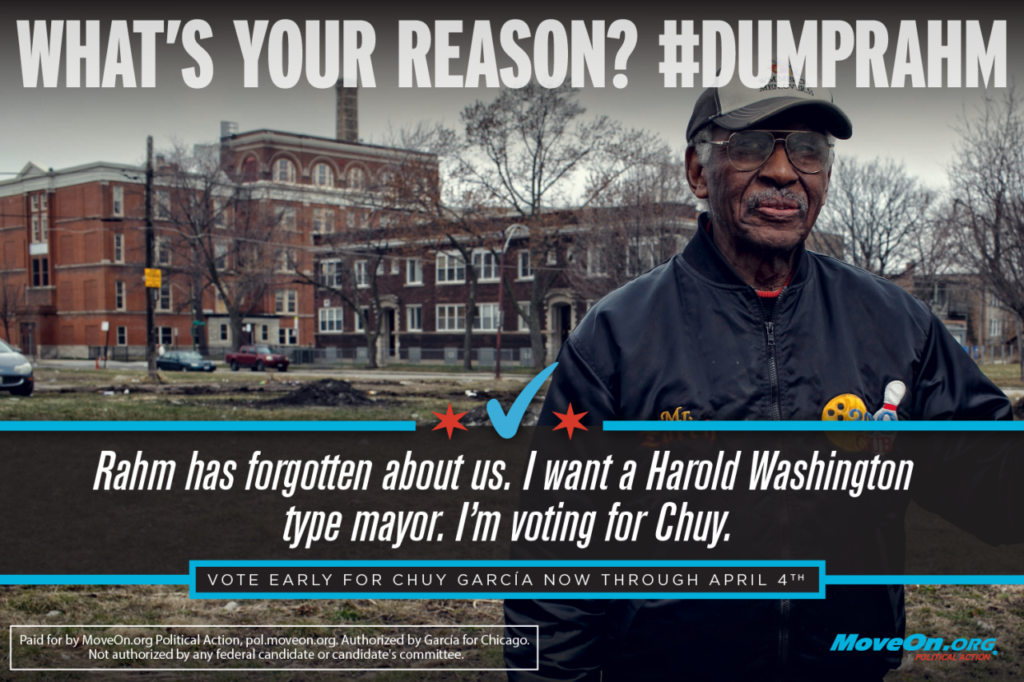 CHICAGO, ILLINOIS – A new ad campaign by MoveOn.org Political Action with the theme #DumpRahm and featuring Chicago residents sharing their personal reasons for not supporting Rahm Emanuel’s re-election campaign began this week and will run through Election Day on April 7.

The ads encourage residents to vote early for Jesús ‘Chuy’ García, a progressive challenger to Emanuel who Chicago MoveOn members voted to endorse in January. MoveOn has hired four paid field organizers to turn out voters in support of García and recruited more than 1,100 volunteers. MoveOn members have made more than 65,000 calls to undecided Chicago voters and contributed more than $42,000 in small-dollar donations to García’s campaign.

There are more than 75,000 MoveOn members in the Chicago area.

Featuring Chicago MoveOn members “from South Shore to Englewood to Humboldt Park to Rogers Park,” the ads will run for the next week on 24 billboards in highly visible locations across the city, and the campaign also includes a five-figure online ad buy targeting undecided voters.

“Chuy speaks to the issues that are relevant to my community: running small businesses, sending our children to good schools, and joining together in the common goals of our safety and well being in Chicago. Even his campaign has brought so much unity and positive energy that this city so desperately needs,” said Chicago MoveOn member Imogene E., who is featured in an ad. “Rahm speaks and acts with an arrogance, not concerned with the majority of Chicago’s quality of life or communities.”

“We’re going to flood Chicago with these images to make sure every undecided voter that sees our ads gets the message and understands why they should be voting for Chuy on April 7,” wrote MoveOn electoral field director Matt Blizek in an email to local members on Monday. “We can’t match Rahm Emanuel’s millions of dollars, but with your help we can spread these ads virally to thousands of voters this week.” 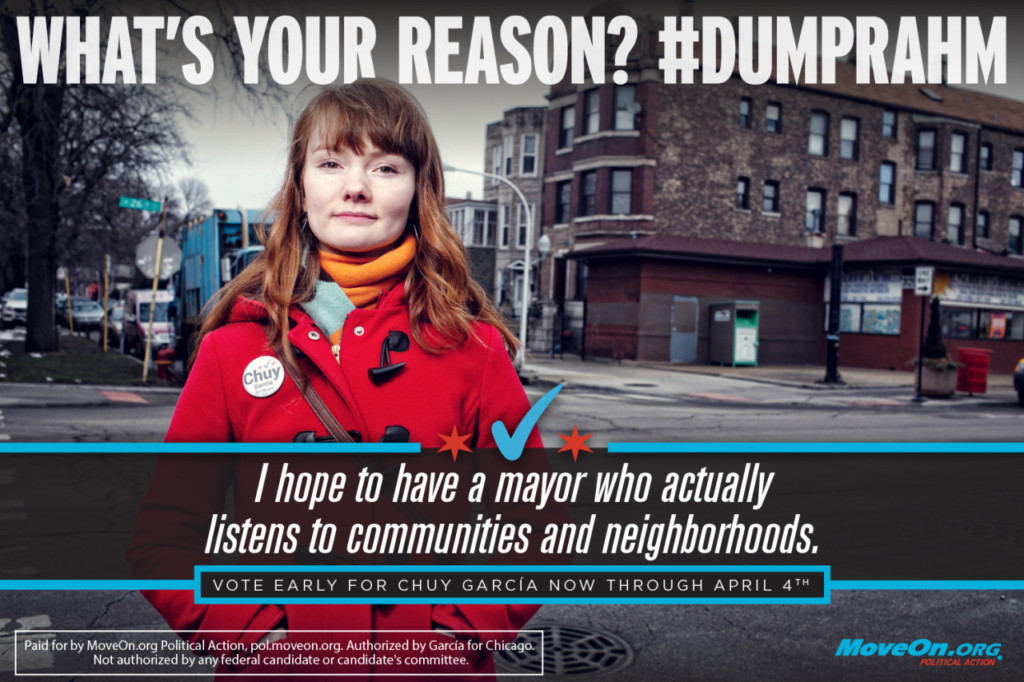 García, a Cook County Commissioner whose campaign has been picking up support across the city, is challenging Emanuel, who is facing growing unpopularity after closing more than 50 schools, predominantly in low-income areas, and failing to provide significant solutions to violence in the city and concerns over economic development.

Chuy García has been a progressive force in Chicago since helping elect Mayor Harold Washington in 1983. He went on to serve on the Chicago City Council for several years before, in 1992, he became the first Mexican-American state senator in Illinois. García has tirelessly advocated for the middle class in both his elected capacities and in roles with non-profits, including the Latino Action Research Network, which he founded in 2005 to give the rapidly growing Latino population in Chicago a stronger voice and connection to legislators.

García has also earned endorsements from Chicago-based and national major progressive groups, including the American Federation of Teachers, the United Electrical Workers, Daily Kos, ATU Local 308 (the largest union of Chicago Transit Authority workers), and the Chicago Teachers Union and its president, Karen Lewis, who declined to run for mayor in the wake of health issues.