We’ll remember 2019 as a year that funneled energy of the resistance into building a stronger MoveOn and progressive movement, fighting Trump and the right-wing GOP agenda in Washington and across the country, and laying the groundwork to win in 2020.

And throughout this impactful year against this tumultuous political landscape, MoveOn members continued to have impact as our organizations grew and changed. With gratitude we said farewell to our co-executive directors, Anna Galland and Ilya Sheyman, and welcomed new leadership: Rahna Epting, our new executive director, who deep experience in organizing, good government advocacy and labor.

We enlarged our SMS program to reach more members in ways that lead to immediate impact. We expanded our base of small donors to build the foundation for our critical work in 2020. Our text messaging blast list crossed 1 million members, and 260,000-plus people contributed to MoveOn this year

And millions of us, all over the country, kept finding new ways to engage, listen to, learn from, and build power with each other. We took action in support of a bold progressive vision, and against the Trump-GOP divisive and destructive agenda.

Here is some of what we did together this year:

JANUARY: Celebrating the swearing-in of a new Congress 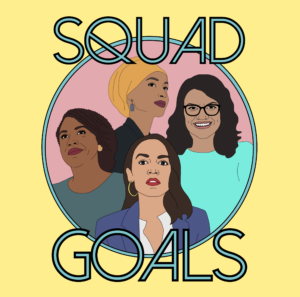 In January, we celebrated the swearing-in of new members of Congress we helped elect. MoveOn members spent much of 2018 working to elect more than 200 federal, state, and local candidates across the country, and saw much of that work come to fruition in January of 2019 as a new Congress was sworn in and Democrats took control of the House of Representatives, providing an important check and balance on the Trump administration. The new House hasn’t been perfect, but it has passed important legislation supported by MoveOn members and has exercised its oversight responsibility over the administration.

We were proud to celebrate the swearing in of the most diverse and progressive House ever, including emerging leaders such as Representatives Alexandria Ocasio-Cortez, Ilhan Omar, Ayanna Pressley, and Rashida Tlaib. And proud to stand with Democrats as they refused to bow to Trump’s demands when he shut down the government trying to secure funding for his racist border wall.

When the Trump administration unlawfully declared a “national emergency” in order to try to reroute taxpayer funds that Congress had allocated for other purposes to border wall construction, we responded. We launched a major national mobilization opposing the #TrumpFakeEmergency and more than 50,000 of us marched for immigrants and refugees.

Trump’s fake national emergency was just the latest in his planned, orchestrated series of attacks—from ending DACA to the Muslim Ban to family separation—designed to enact his racist and xenophobic policies. MoveOn members have been at the forefront of resisting these policies since the moment Trump was sworn in.

In a big win for progressives, many 2020 Democratic candidates are skipping the AIPAC conference this weekend. pic.twitter.com/Wtj7dwtafJ

More than 74% of MoveOn members surveyed agreed that “any progressive vying to be the Democratic nominee for president should skip the AIPAC conference.” AIPAC—the American Israeli Political Affairs Committee—is an extremist right-wing lobbying group that worked against President Obama’s historic Iran deal, provides platforms to known Islamophobes, and has invited figures actively involved in human rights violations to its stage. AIPAC has also refused to condemn the white nationalism and anti-Semitism of Republicans, including Trump’s friend and former adviser Steve Bannon. In a big win for progressives and MoveOn members, many 2020 Democratic candidates skipped the 2019 AIPAC conference after we launched our campaign.

After Attorney General William Barr missed the deadline set by Congress to release the full Mueller report, we took action across the country to demand that Mueller’s full report and underlying evidence be made public. On April 4, thanks to our work with close allies tending the ‘Nobody Is Above the Law’ rapid-response network, tens of thousands of MoveOn members and allies took to the streets in more than 325 events across the country to demand that Barr release the full report. A redacted report was ultimately released.

MAY: Delivering 10 million signatures for impeachment 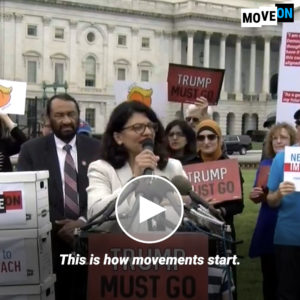 After the Mueller report’s release, a majority of House Democrats were still on the fence about impeachment, so we determined to continue to keep up the pressure. Partnering with allies including Need to Impeach, Free Speech for People, Democracy for America, CREDO, and By the People, we delivered a combined 10 million petition signatures favoring impeachment to Congress—the largest petition delivery in history.

JULY: A rapid response mobilization to Close the Camps

Thousands of people took to the streets all across the country yesterday to call for the closure of the inhumane detention camps that are abusing immigrant children and families. #CloseTheCamps pic.twitter.com/uWCBzhmp1I

With outrage over the Trump administration’s inhumane and unlawful policy of detaining immigrant children back at the center of the national conversation, MoveOn members mobilized.

In late June we called a national #CloseTheCamps day of action for July 2, and, working with partners, within less than a week we organized more than 175 protests nationwide outside of members of Congress’ state and district offices.

Tens of thousands rallied and read stories from children in detention to shine a light on the atrocities being perpetrated by our government. The events received widespread media coverage and at least 10 members of Congress spoke to the crowds, with most committed to visiting a detention facility to bear witness and advocate for change. 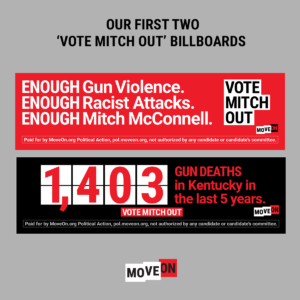 Beating Trump is MoveOn Political Action’s number one priority in the 2020 election. But it’s also critical that we end Republican control of the Senate, so that we have a real chance of advancing key programs like Medicare for All, universal pre-K, a wealth tax, student loan forgiveness, and the Green New Deal.

In August, MoveOn put up billboards in Kentucky focusing on gun violence and calling on voters to “Vote Mitch Out”—the first steps in a national 2020 election effort funded by MoveOn members that aims to end Republican control of the U.S. Senate. Continue to help fuel this effort and donate here. 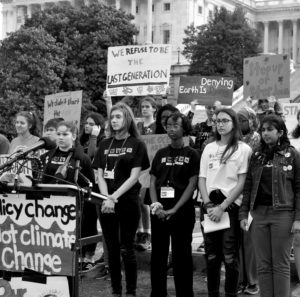 On Friday, September 20, youth around the world led a historic Global Climate Strike. More than four million people around the world declared that the time had come for action on the climate crisis. MoveOn members across the country attended local actions, and thousands joined a national organizing call to learn about additional actions we can take, individually and together, to keep up this energy.

MoveOn has also been fighting alongside the student leaders of the US Youth Climate Strike, the organizers of the Sunrise Movement, and other climate-focused groups. Together, we are pushing the climate crisis into the center of the 2020 debate and are propelling the bold vision of the Green New Deal in Congress and across the country. 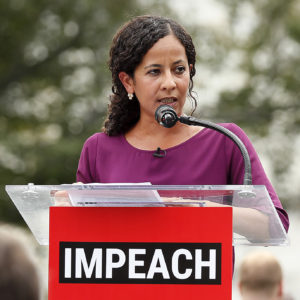 Rahna Epting became our new Executive Director this fall (thanks outgoing EDs Anna Galland and Ilya Sheyman for your leadership and service!). Epting has been a leader in the progressive movement for 15 years, playing important roles in the organized labor, leadership development, youth organizing, and democracy reform spaces. She has held senior roles in organizations, including the Service Employees International Union, Every Voice, Wellstone Action, and the Alliance For Youth Organizing. As a Black and Iranian woman, she is the first person of color to fill MoveOn’s executive director role.

Thank you to the hundreds of thousands of people who hit the streets calling for Trump’s impeachment & removal.

Your voices were amplified by news broadcasts nationwide – here are just a few. pic.twitter.com/ApXDTB6tqM

Two years ago, MoveOn led the call for impeachment when Trump violated his oath of office by firing FBI Director James Comey, after already committing other impeachable offenses. As Trump continued to obstruct justice and attack the core of our democracy, we were carefully laying the groundwork to make impeachment a reality.

On December 18, Trump became just the third president in U.S. history to be impeached for high crimes and misdemeanors and face removal by the Senate. MoveOn members have made more than 40,000 pro-impeachment phone calls to Congress this year, and, in the largest petition delivery in U.S. history, alongside allies, we delivered 10 million pro-impeachment signatures to Congress.

The night before the House of Representatives voted on impeachment, more than 200,000 of us organized and attended rallies and protests at more than 550 congressional offices and public squares to declare that Nobody Is Above the Law as representatives finalized their positions and senators looked on.

MoveOn members did all this in 2019—and more. We supported Democrats in elections in Virginia, endorsed bold primary challengers, demanded an end to the U.S. support of the Saudi war in Yemen—leading to an incredible bipartisan vote that was a rebuke of Trump’s foreign policies in that region—while supporting campaigns on state and local levels, actions against bad corporate actors, and using our social media channels to lift up compelling, moral voices across a range of issues.

MoveOn and our millions of members are in it for the long haul. Thank you for all you did to help us have the impact we did in 2019. And now, let’s dig in to give all we can to make 2020 the year we defeat Trump, hold accountable his partners in his right-wing agenda, and elect bold progressive leadership across the country.

MoveOn is committed to an inclusive and progressive future. We envision a world marked by equality, sustainability, justice, and love. In order to achieve this, MoveOn Political Action has outlined three core strategies for 2020:

1.) We will mobilize our millions-strong membership and other grassroots progressives to leverage their people power for impact,
2.) We will inspire “high-potential” voters who might otherwise stay home to turn out through narrative and issue advocacy work and direct voter contact, and
3.) We will protect voters in the face of organized disinformation campaigns and other suppression efforts.

Our goals are to put our collective people power to work to defeat Trump, end Republican control of the Senate, protect Democratic control of the House, and build support for progressive governance that can begin to mend the tears in our nation’s fabric and put us on a path to a more equal future, with a country that works for everyone, and where everyone can thrive.

We’re thrilled to be heading into the next chapter of MoveOn as we head into 2020. Thank you for all that you do. We truly couldn’t do it without you.