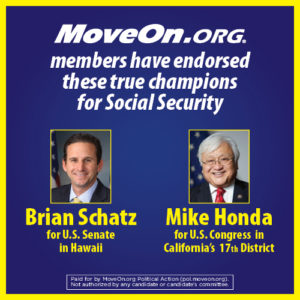 MoveOn members are using their first endorsements of the 2014 election cycle to go to bat for Social Security champions.

“Sen. Schatz and Rep. Honda are strong progressives who have helped lead the fight to protect Social Security. Time and again, they’ve stood up to big corporations and special interests to do right by their constituents. MoveOn members overwhelmingly support them for reelection, and we will use our combined people power of more than 8 million MoveOn members nationwide to see that they win,” said Ilya Sheyman, the executive director of MoveOn.org Political Action.