This is part two of our series, “Let’s Talk Issues.” Today we’ll discuss the Trans-Pacific Partnership, a trade agreement that Senator Elizabeth Warren has strongly spoken out against and that MoveOn members have actively opposed. 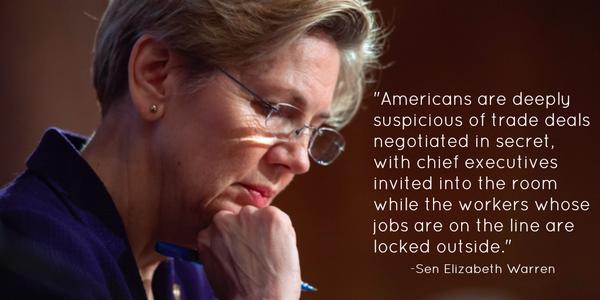 What is the Trans-Pacific Partnership (TPP)?

If I were to ask you to lay out the details of the Trans-Pacific Partnership, would you be able to? If you’re thinking to yourself, “probably not,” you’re not alone—that’s part of the problem! The Trans-Pacific Partnership would be the LARGEST U.S. “free trade” agreement ever! And yet, there’s a good chance you’ve never heard of it. You see, that’s exactly how the folks behind this controversial trade deal want it.

Who are these folks, you ask?

While there are plenty of people at the table—Wall Street billionaires, corporations, foreign governments (Japan, Australia, Peru, Malaysia, Vietnam, New Zealand, Chile, Singapore, Canada, Mexico, and Brunei Darussalam)—there’s one group intentionally left out of these negotiations: the American people. In fact, much of what we know about this egregious trade deal has come from leaked documents made public by the group WikiLeaks.

Simply put, the TPP is a HUGE free-trade agreement between the United States, Canada, and 10 countries within the Asia-Pacific region. The deal would make it easier for these countries to trade with each other and would work to help eliminate China’s dominant presence in world trade. But this agreement has far bigger implications.

Why should this matter to me?

1. The TPP would cost us American jobs and hurts our workers.

The TPP would make it easier for U.S. corporations to ship American jobs overseas to low-wage countries where they can exploit workers for little pay. The Economic Policy Institute predicts that, if the TPP is agreed to, the U.S. will lose more than 130,000 jobs to Vietnam and Japan alone.

Under NAFTA, the U.S. lost more than 700,000 jobs. Since China’s entry into the World Trade Organization, the U.S. lost over 3.2 million jobs to the growing trade deficit with China. Under the Korea Free Trade Agreement, the U.S. has lost 70,000 jobs. The TPP would be more of the same, providing special benefits to firms that offshore jobs and reducing the risks associated with operating in low-wage countries.

When the minimum wage in Vietnam averages just $0.59 per hour, American workers will just not be able to compete.

Government sovereignty is the power that we have over our own laws and government, and the TPP threatens to throw that out the window. You see, the agreement would actually permit foreign corporations to sue our government over any law that they see as harmful to their profits. What’s worse that the suits would be conducted in extrajudicial trials held before a board of private corporate attorneys with the power to order our government to make massive payments to corporations—from our tax dollars. There is no known limit on the laws that the corporations can attack or the amount of money our government can be ordered to pay.

3. The TPP would make it hard to negotiate lower drug prices for Medicaid and Medicare.

Americans pay far more for health care than people in any other developed country, even though U.S. life expectancy falls below the average for developed countries. The TPP threatens to roll back existing policies that help to rein in exorbitant medicine prices. It would constrain the ability of the U.S. government to reduce medicine prices, helping pharmaceutical companies make millions more in profits, while driving up the bill for U.S. taxpayers and those who need medicine most. Pharmaceutical companies have lobbied Congress for the TPP more than any other industry.

The bottom line is that the Trans-Pacific Partnership was not written by or for people, but by and for powerful corporate interests that could challenge any law that could affect their profits. Their lawsuits would be heard in international tribunals, bypassing domestic courts. But here’s the thing: our laws’ primary goals are not to protect corporate profits; they’re meant to protect people.

For more on why you should oppose the TPP, check out some information from our friends at Public Citizen.

You might have heard the term “fast track” and wondered what it meant. Here’s the breakdown: the Obama Administration is pushing for fast track authority for the TPP, which would prevent Congress from changing any provision in the agreement and force them to vote the entire agreement up or down after a shortened debate period.

This is yet another way that the folks behind the TPP are attempting to keep this terrible “free trade agreement” a secret. This begs a simple question: what do they have to hide?

What can you do?

Click here to tell Congress that we’ve had enough of bad trade deals like the Trans-Pacific Partnership.

Our friend Robert Reich explains his take on the TPP