“Progressive groups hoping to draft Massachusetts Sen. Elizabeth Warren into the 2016 presidential race will tackle money in politics with an event next month in New York City featuring a top advocate of campaign finance reform. …

“While Warren’s refrain that the ‘system is rigged’ against average Americans is usually described as an anti-Wall Street message, Lessig sees it as a warning about the corrupting influence of money in politics. ‘I don’t think there’s any important issue that people on the right or left care about that we can address sensibly until we address this issue,’ he said.” 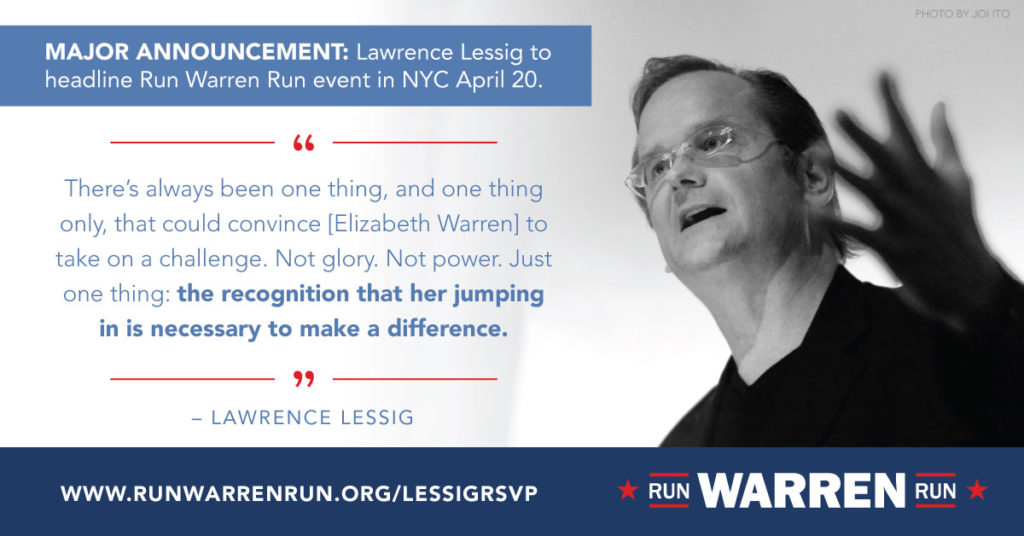 [Run Warren Run’s] latest participants: Arturo Carmona, executive director of Presente Action, which counts 300,000 members nationwide, and Erika Andiola, a national DREAMer activist, who played a key role in the fight for Obama’s executive actions on immigration. … Carmona and Andiola write, “Contested primaries test and strengthen candidates and ensure progressives have a chance to make our voices heard.” They argue that leaders are needed who will fight powerful interests and protect the most vulnerable, including “impoverished Americans, women, children and immigrants to reduce social and economic inequality.” 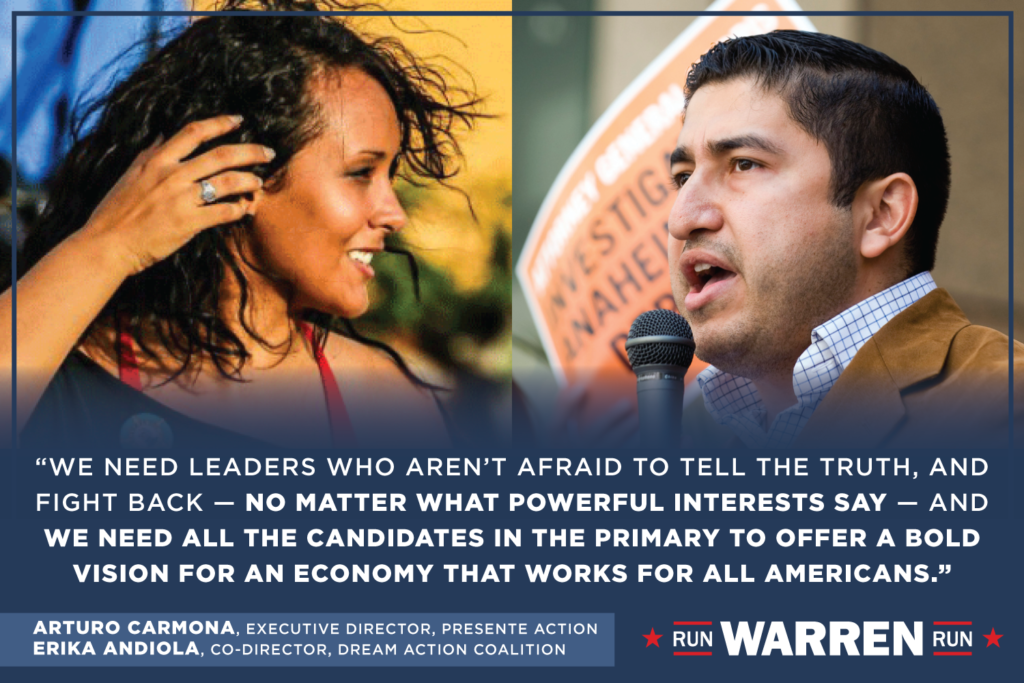 Since the Boston Globe called on Senator Warren to run for president this weekend, our campaign to encourage her to get into the race has gained even more traction. On Monday night, Run Warren Run was front and center on MSNBC. First, Rachel Maddow spent the first five minutes of her show talking about the Globe endorsement:

“Boston Globe, one of the best papers in the country, the dominant paper in the whole northeastern corner of the country, the Boston Globe basically just did a whole special section of the paper devoted to trying to persuade Senator Elizabeth Warren she really ought to run for President. … As far as they know, this paper has never done anything like this before.”

And then, MoveOn’s Anna Galland brought our message to “The Last Word with Lawrence O’Donnell” to discuss the impact of the Globe endorsement: 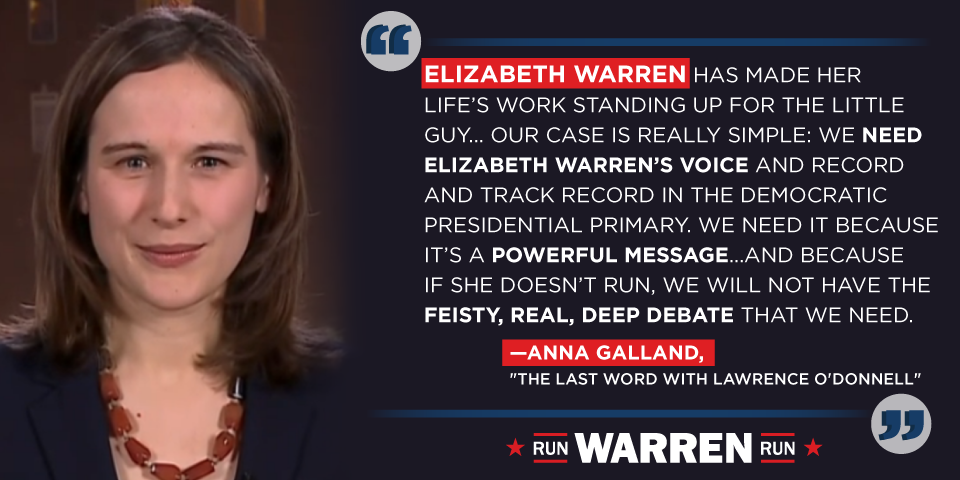 Anna Galland also joined MSNBC’s Krystal Ball to give an update on the Run Warren Run campaign and talk about our work. Watch the clip here.

DEMOCRATS WOULD be making a big mistake if they let Hillary Clinton coast to the presidential nomination without real opposition, and, as a national leader, Massachusetts Senator Elizabeth Warren can make sure that doesn’t happen. While Warren has repeatedly vowed that she won’t run for president herself, she ought to reconsider. And if Warren sticks to her refusal, she should make it her responsibility to help recruit candidates to provide voters with a vigorous debate on her signature cause, reducing income inequality, over the next year. 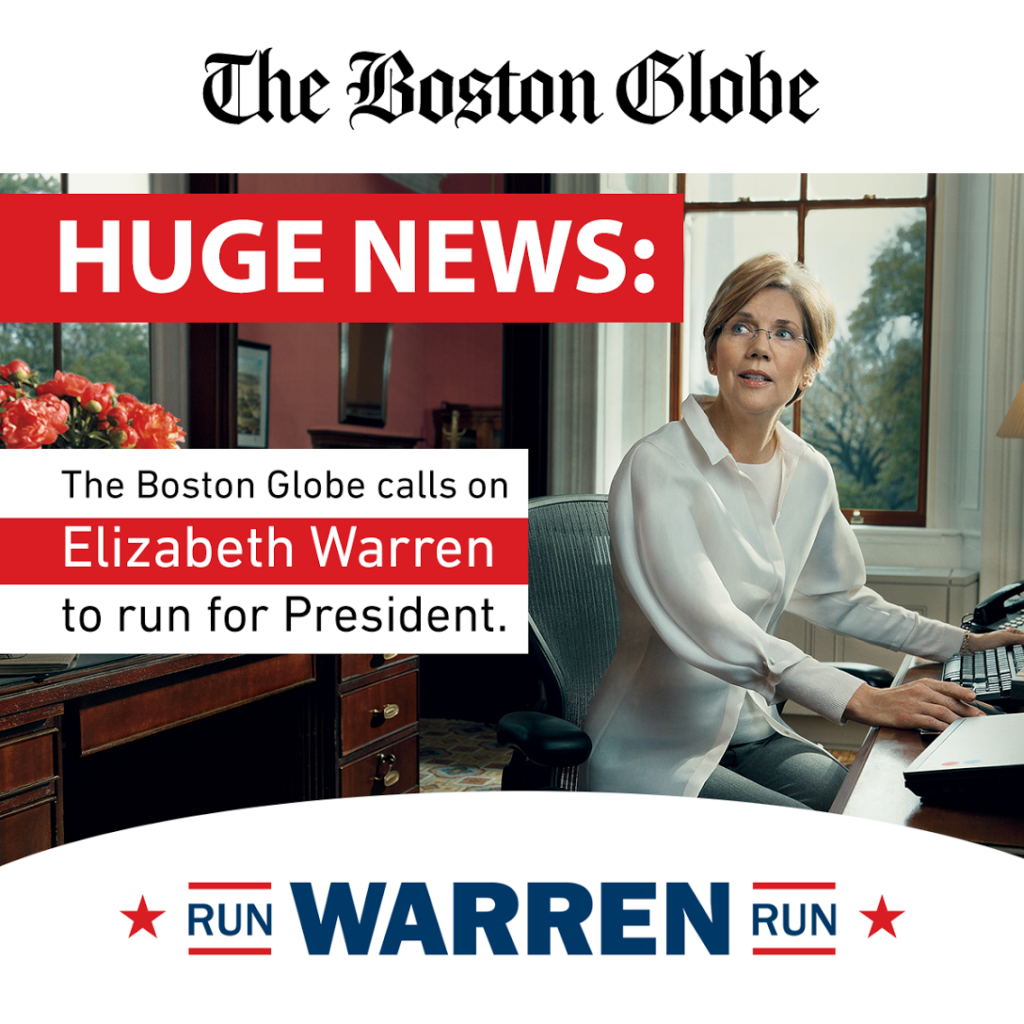 And read more coverage of the editorial from CNN, The Nation, The Huffington Post, The Hill, Bloomberg Politics, Mother Jones, Boston.com, and Fusion.

MARK YOUR CALENDARS: Senator Warren will give the commencement address at Berkshire Community College in Lenox, Mass. on May 29. Here’s what Dr. Ellen Kennedy, the college’s president, has to say:

“Senator Warren is the embodiment of how hard work and dedication are rewarded with success. Her inspirational journey toward becoming a prominent lawyer and nationally recognized politician began with her working class family in Oklahoma, a story that is relatable to many of our students and alumni. Senator Warren’s efforts in Washington to combat the mounting student debt crisis speak to her commitment to helping students realize the American Dream.”