It’s official: The Senate has voted to confirm Ketanji Brown Jackson as the newest justice on the Supreme Court!1

Justice Jackson joins the court with sterling credentials as a lawyer and jurist and a proven track record as a fighter for the rights of the people. She is also making history as the first-ever Black woman to sit on the highest court in our nation.

To celebrate this joyous, historic day, MoveOn has just printed a big batch of these beautiful stickers honoring Justice Jackson, and we’re giving them away for free while supplies last!

Just click here or on the image below to order your sticker now! 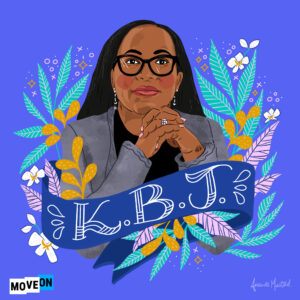 Republicans in the Senate did everything in their power to derail and undermine Justice Jackson’s nomination, treating her confirmation hearings as an opportunity to spew racist, sexist bile and spread ridiculous conspiracy theories. But through it all, Justice Jackson refused to stoop to their level, maintaining her composure during even the most outlandish attacks from Republicans hoping for a bit of air time.

And through it all, MoveOn members like you were there to support Justice Jackson and stand against the efforts of Republicans to stop her confirmation.

Since the start of her confirmation hearings:

You can join with hundreds of thousands of fellow MoveOn members to celebrate Justice Jackson’s confirmation today by ordering your free KBJ sticker, placing it somewhere visible, and sharing this message with your family and friends! Click here to order now.

Justice Jackson will be a voice for the people on the court, having served as a public defender and on a sentencing commission. The work must continue to rebalance the court after Mitch McConnell and Republicans packed it with ultra right-wing conservatives. We need at least three more Justice Jacksons on the court, because our human and civil rights are on the line. So grab your sticker now to proudly display your support for this historic confirmation and as a reminder of what’s at stake in our work to build an America where everyone can thrive.