When Trump was elected president, the repeal of the Affordable Care Act—and much worse—seemed inevitable.

Then the people rose up.

MoveOn have been at the center of it all. Here’s how it happened.

MoveOn’s first national day of action against Trumpcare came on December 20, 2016. Protests in dozens of cities nationwide, with thousands participating. Then we started hitting the phones, with tens of thousands of appeals from constituents to elected officials.

Next came January 15, 2017: “Our First Stand,” as they called it, a wave of public demonstrations on health care sparked by Bernie Sanders. By then, the GOP was already growing wary. Then came the unforgettable Women’s March. And then that first congressional recess in February—the first “Resistance Recess”—when 100,000 people flooded town hall meetings and told their senators and representatives that their lives were on the line, and they were ready to fight to defend them.

The House Republicans’ response to the February Resistance Recess was to come home and schedule a vote on their hideous bill at breakneck speed, with no hearings or consultations. Protests multiplied. Republicans balked—on both the hard-right and moderate wings of the GOP caucus. MoveOn members and allies lit up the phone lines.

On the day of the vote, MoveOn members alone made 30,000 calls to House Republicans. In Washington, D.C., we gathered to protest the bill’s passage—and suddenly, moments before the rally began, Paul Ryan canceled the vote. “Obamacare is the law of the land for the foreseeable future,” he announced.

It was hard to believe. Joined by Nancy Pelosi, we literally jumped for joy: 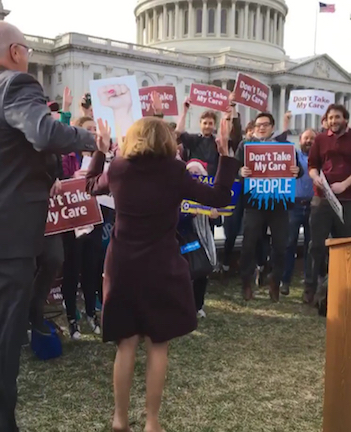 That was the 24th of March, a wonderful day. But, as it turned out, it was too good to be true.

Paul Ryan was lying. As the news media moved on to other stories, the ultraconservative Freedom Caucus was busily negotiating an amendment to make Trumpcare drastically worse. Suddenly, the bill was back on track. And a group of so-called Republican moderates, rather than rejecting a bill that had grown even more cruel to their constituents, utterly lost their backbones and caved.

In that moment of crisis, MoveOn members pulled out all the stops—massing in protest, funding planes dragging anti-Trumpcare banners over Republicans’ home towns, frantically flooding Republicans’ offices with calls. It wasn’t enough. On May 4, 219 Republicans voted to pass Trumpcare, casting a vote that will haunt them for the rest of their political careers. Many will lose their seats because of it (we’ll help see to that!).

As they left the Capitol to board a bus, sip champagne, and celebrate with Trump in the Rose Garden, House Republicans were met with MoveOn protestors were waiting outside, chanting “SHAME! SHAME! SHAME!”

That’s when the die-ins began. The resistance had entered a new phase. If the bill passed the Senate, the consequences would be lethal.

Working with a unified array of allies—from Indivisible and People’s Action to Planned Parenthood and Ultraviolet, from unions like the SEIU and AFSCME to nonpartisan groups like AARP, and with coalition efforts like Protect Our Care and Health Care for America Now, MoveOn turned the pressure up as far as it could go.

Alongside progressive movement allies like CREDO, the Working Families Party, and Our Revolution, we pressed Democrats to stand and fight—to shut down business as usual in the Senate as Republicans negotiated their bill in secret. As Democrats ramped up their opposition, the media, which had once more fallen asleep at the switch, finally perked up and took notice that insurance for 22 million Americans was on the verge of incineration. McConnell vowed a vote on his bill by the end of June—so we went on the road with Bernie Sanders, drawing crowds of thousands for last-minute protest events in West Virginia, Ohio, and Pennsylvania. 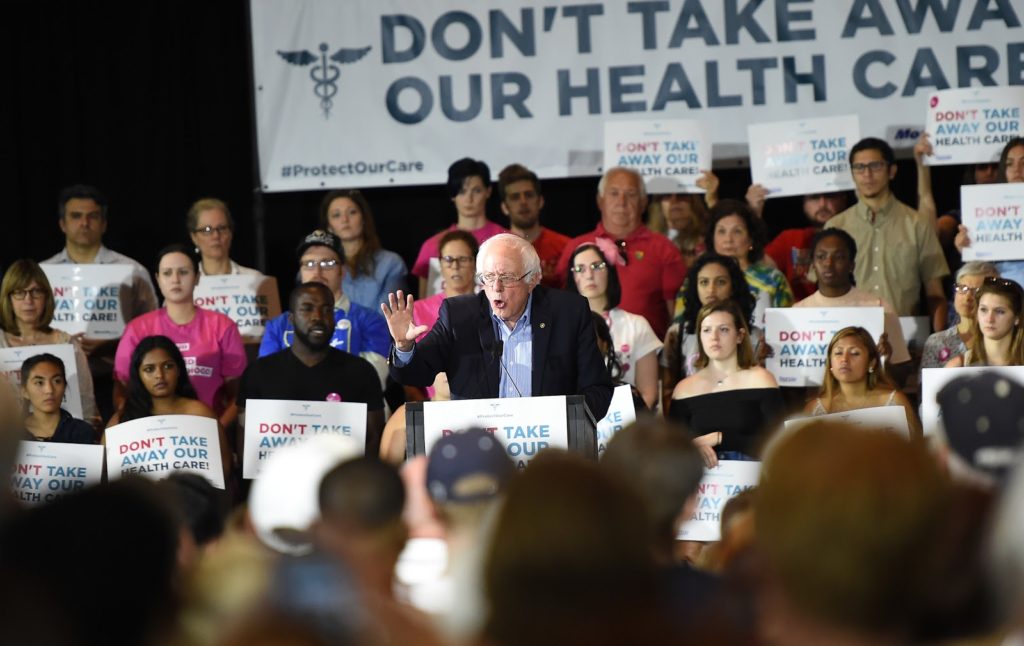 PITTSBURGH, PA – JUNE 24: Sen. Bernie Sanders and Pennsylvanians rally to demand that Sen. Pat Toomey (R-PA) vote against Trumpcare during an Emergency Rally with MoveOn.org To Stop Trumpcare held at the Pittsburgh Convention Center on June 24, 2017 in Pittsburgh, Pennsylvania. (Photo by Jason Merritt/Getty Images for MoveOn.org)

We joined partners for relentless demonstrations outside of district offices. We cheered for disability rights activists from ADAPT as they parked wheelchairs in McConnell’s office and refused to leave—chanting “No cuts to Medicaid!” even as they were dragged out by police officers—and then repeated the tactic in other GOP offices in D.C. and around the country. On the night before the voting was to begin, a group of Democrats and activists gathered for an impromptu conversation on the steps of the Capitol that turned into a roaring rally. And then, fearing a loss, McConnell—as Ryan had done before him—yanked the bill, delaying the vote.

But we’d collectively learned our lesson from the House—and didn’t pause for a second.

Over the Fourth of July recess, activists drove home opposition to the health care bill every time a senator appeared in public. As senators returned to Washington, D.C., doctors, patients, and activists from the Center for Popular Democracy, HousingWorks, and other groups staged simultaneous sit-ins in more than a dozen GOP Senate offices. Calls poured in, ads aired on television, and medically fragile children—dubbed “the Little Lobbyists”—walked from office to office in the Senate to tell Republicans not to take away the care that kept them alive. Citizens and Democrats rallied and spoke out, and Republicans tried to dodge cameras and constituents to avoid answering for the cruel legislation they were poised to pass.

And then, at last, the wheels came off the GOP bus. Just as in the House, they moved the bill to the right to please the Ted Cruz conservatives. But even that wasn’t enough for Rand Paul and Mike Lee. In mid-July, with Paul, Lee, Murkowski, and Collins all pledging to vote against it, journalists declared Trumpcare dead once more.

But it came back to life—yet again.

In late July, Republicans came up with a new plan: “Skinny repeal,” a pared-down bill that would “only” kick 17 million Americans off of their health insurance. Paul and Lee came around. It looked like they had the support they needed for passage. As they barreled towards a vote, MoveOn cranked up every pressure channel in our arsenal: phone calls, videos, nationwide protests, and rallies outside the Capitol. We even organized door-to-door canvasses in key states to talk to voters about the threat of Trumpcare—and urge them to call their senators. Our efforts had an effect: the GOP lost two votes, on “repeal and replace” and “repeal and run” versions of Trumpcare, by significant margins. But all of that was a prelude to the Skinny Repeal vote. And it seemed like, this time, we were on track to lose.

On July 27, the day of the final vote, we woke up with pits in our stomachs. That night, our team in D.C. led one more Capitol Hill rally, hoping to be ready to chant “Shame” as the Senators filed out after voting to shred Americans’ coverage. The protest stretched on for hours, as the sky darkened, with demonstrators sharing deeply personal stories about the impact of the ACA on their own lives, punctuated by visits from Democratic Senators urging us not to give up the fight. “We can hear your chants from inside the Capitol,” they told us. Midnight approached, and passed. We stayed put. And then, at 1:30am, our minds were blown: Susan Collins voted no. Lisa Murkowski voted no. And John McCain… voted no!

The crowd outside the capitol exploded in cheers and relief. A video of that moment of victory ricocheted across the Internet, retweeted 27,000 times. It was high drama of a kind rarely seen in politics—and even better, it had a happy ending.

Inevitably, Trumpcare came back to life yet again. In September, the GOP tried still another mad rush to pass a hideous repeal bill—the worst one of all, led by senators Lindsey Graham and Bill Cassidy. But the resistance rose up again to defeat it. As the final vote approached, three Republicans signaled their opposition, and the effort collapsed.

On September 30, 2017, the GOP’s authority to repeal the Affordable Care Act with a 50-vote Senate majority expired. If they want to repeal it legislatively now, they have to go back to the beginning of the process and pass it once more through the House. Trump is still hellbent on destroying the Affordable Care Act through executive-branch sabotage, and we’re still fighting against that, day in and day out. But anything done via executive action can be undone by a future president with the stroke of a pen. The overarching threat of a legislative repeal—something that could only be reversed by an act of Congress—has, for now, been defeated. MoveOn was at the heart of the fight. It’s the template for defeating the GOP agenda. And if they do try again, we know exactly how to stop them. 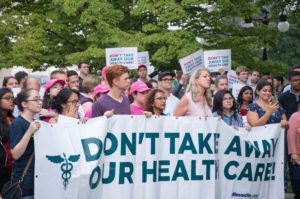 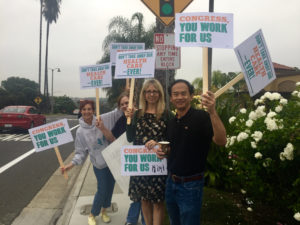 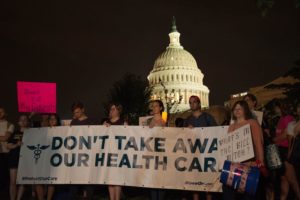 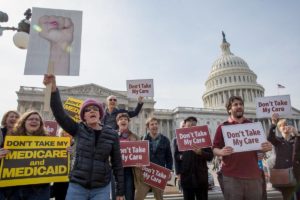 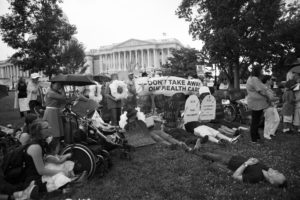 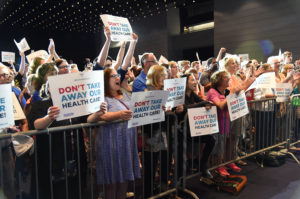 PITTSBURGH, PA – JUNE 24: A general view of atmosphere as Pennsylvanians rally to demand that Sen. Pat Toomey (R-PA) vote against Trumpcare during an Emergency Rally with MoveOn.org To Stop Trumpcare held at the Pittsburgh Convention Center on June 24, 2017 in Pittsburgh, Pennsylvania. (Photo by Jason Merritt/Getty Images for MoveOn.org) 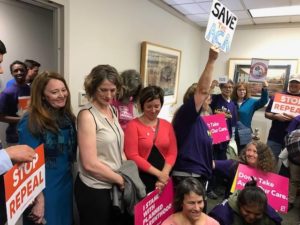 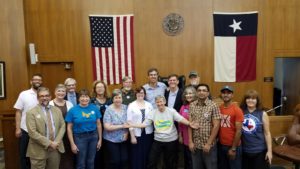 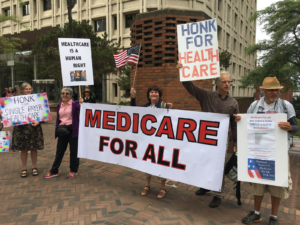 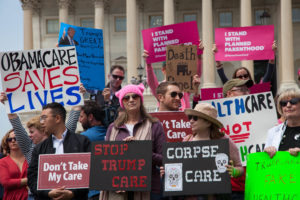 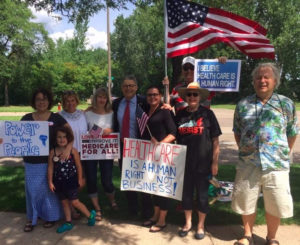 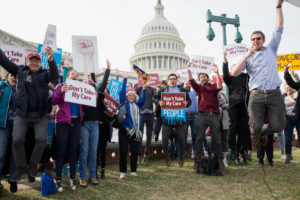