Flake was battered with questions about that issue as well as President Donald Trump’s proposed border wall; his resolution to stop an Obama administration-era rule on internet privacy; his opposition to taxpayer funding for Planned Parenthood; and his support for eliminating the filibuster for Supreme Court nominees to secure the confirmation of Trump’s pick, Neil Gorsuch.

But the conversation kept coming back to health care. Trump and the Republican-controlled Congress have vowed to repeal and replace the Affordable Care Act, which they derisively call “Obamacare.”

VIDEO: “Senator, my question is: when are you going to choose your country over your party? [Twitter/Kyle Griffin]

‘SHAME ON YOU!’: Republican senator who opposed Trump gets grilled in a raucous town-hall meeting [Business Insider]

As Congress nears the halfway point of its two-week April recess, Republican lawmakers nationwide are facing growing backlash for refusing to stand up to Donald Trump’s dangerous agenda, with constituents voicing concern over failed GOP-led efforts to revoke health care from millions and Republican leaders’ refusal to launch full, independent investigations into the Trump campaign’s possible collusion with Russia.

***On this week’s Showtime’s “The Circus” with John Heilemann: A visit to the MoveOn-led Resistance Recess action outside Sen. David Perdue’s fundraiser in Atlanta.
Preview: https://twitter.com/SHO_TheCircus/status/852653897042632704/video/1 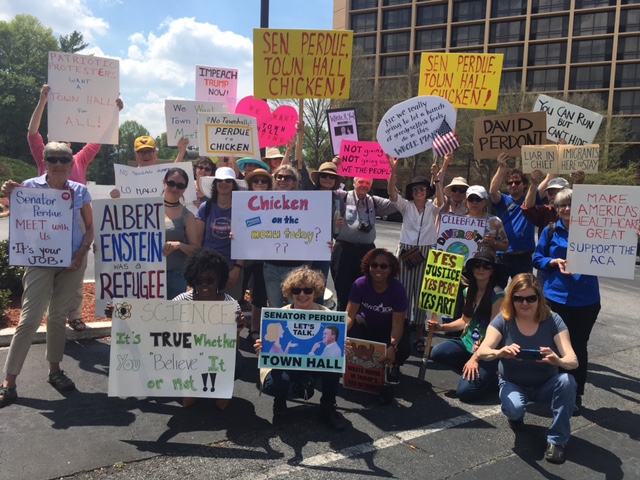 Groups like Indivisible and MoveOn.org are urging local progressives to attend the meetings. And the intensity of the interest around the events has lawmakers — especially moderate Republicans in competitive districts facing tough re-election battles in 2018 — paying close attention.

Huffington Post: House Republicans Are Having The Worst Spring Break Ever

WASHINGTON ― When House Republicans returned home this week for a long Easter recess, they found themselves facing rooms packed with loud, furious constituents — and in some cases relied on extra security.

It turns out, governing with complete control of the federal government is harder than Republicans may have expected. After failing to rally enough support to repeal and replace the Affordable Care Act last month, the party has struggled to come up with a coherent legislative agenda, and the scandal-ridden Trump administration isn’t helping.

Despite the hostile atmosphere, a number of rank-and-file Republicans held town hall meetings in their districts. Health care dominated the conversation. But constituents also wanted answers on immigration, climate change, Russia, and whether lawmakers were going to demand President Donald Trump’s tax returns.

WASHINGTON — Reps. Leonard Lance of New Jersey and Ryan Costello of Pennsylvania appear to be the only swing-district Republicans who voted for their party’s bill to replace Obamacare who will directly face constituents over the April recess, according to a USA TODAY analysis of scheduled town halls compiled by Townhallproject.com.

…The migration away from public forums has been going on for months, despite complaints from constituents and local media. There have been roughly 30 recent newspaper editorials slamming lawmakers for avoiding town halls and calling on members to face their voters, not only in bluer portions of the country like New York but also in critical battlegrounds like Pennsylvania’s 6th and 7th districts, represented by Reps. Pat Meehan and Costello.

…While the strategy may be smart in the short term, allowing members to avoid images of themselves on the defensive, in the longer term it could hurt, said Ross Baker, a political science professor who specializes in Congress at Rutgers University. Just like the Tea Party-driven protests against Obamacare in 2009 came with a price for House Democrats, who lost control of the House in 2010, Republicans should not ignore the current backlash, he said. “If there’s anything worse than being on the wrong side of a political issue it’s appearing cowardly and not facing your constituents,” said Baker. “Politics is all about accountability.”

At Resistance Recess events, MoveOn members are demanding that their elected officials stand up to Trump’s dangerous and unconstitutional agenda, investigate Trump/Russia, and prevent a war with Syria. The GOP-led effort to unravel the Affordable Care Act, and revoke health care from millions, is continuing to draw the strongest responses, with constituents confronting elected officials who supported the Republican health care bill.

The chaotic scene that unfolded Wednesday foreshadows the problem dozens of centrist Republicans will face during the 2018 midterm elections in swing districts across the country. While Coffman was one of the few moderates to brave a town-hall setting during the two-week Easter recess, his colleagues won’t be able to dodge constituent blowback at the polls.

One woman who described herself as a health care worker with pre-existing conditions said the health care bill that Trump endorsed would eliminate protections for people with medical histories.

The Hill: Inside a NJ Republican’s furious town hall

“I don’t feel that you’ve represented my interests or the majority of the constituents that are in your district, ” Janet Katz, a Chester Township resident, told Lance. “I want this repeal crap to stop!”

Lance pledged that he wouldn’t support any GOP health bill that rolled back coverage for people with pre-existing conditions or eliminated ObamaCare’s “essential health benefits,” which dictate what services insurer must provide. Members of the conservative House Freedom Caucus specifically targeted that provision during negotiations over the House GOP’s healthcare bill.

Huffington Post: Congressman Who Shouted ‘You Lie’ At Obama Gets A Taste Of His Own Medicine

When [Rep. Joe Wilson], who voted against extending the Violence Against Women Act in 2013, claimed he’d worked to prevent violence against women, audience members chanted “You lie!” They did it again when he tried to outline problems with the Affordable Care Act, according to WJBF.

The crowd also booed when Wilson said he supported President Donald Trump’s decision to launch missiles against Syria after it used chemical weapons, according to the Post and Courier. Wilson said he would have supported Obama if he’d made the same decision as president.

Monday’s exchange was only the latest confrontation between a Republican lawmaker and his or her constituents at home. In February, members of Congress intent on repealing the Affordable Care Act took heat at town halls across the country for their positions. Republicans came close to repealing Obama’s health care law last month, but ultimately pulled the bill because they could not muster enough support.

Things got heated within the crowd when Shreena Gandhi of Okemos said she was recently called “sand and the N-word” and was told to “get out of my country” by a man at a coffee shop.

Another attendee next to her claimed she was “being ridiculous.”

“I felt like I was being silenced. He just kept talking,” Gandhi said of the attendee.

She asked Bishop how he will hold President Donald Trump “accountable on his white supremacy.”

“He discriminates against women,” she alleged. “He’s bragged about sexual assaulting people. If I wasn’t a woman of color, I don’t know that he would speak to me the way he’s been speaking to me this entire time.”

In addition to health care, constituents pushed members of Congress to stand up to Trump on climate change, immigration, and foreign policy:

Do you believe human activity is the leading cause of climate change?” Reaver, who has a bachelor’s and master’s degree in environmental science, asked.

“No,” the congressman immediately interjected.

“Please explain why your personal opinion as a nonexpert in the field is more valuable than the evidence of 97 percent of scientists,” Reaver pressed.

Her rebuttal received a standing ovation.

The crowd in The Dalles got vocal when Ian Chandler, who works in the fruit industry, told Walden that the Republican position on immigration was not only unfair to immigrants but also creating a damaging labor shortage for local growers.

“Republicans are issuing a lot of negative rhetoric about immigrants,” Chandler said. “Kids are hearing a lot of terrible things about their parents and their people. Immigrant labor is 99 percent of our labor.”

Gretchen Kimsey, a 50-year resident of The Dalles, told Walden that she had voted for him like clockwork every two years. But no more.

“I feel you’ve abandoned me for the right, the far right,” she said. “Where are you Greg Walden? You have abandoned the middle way. You no longer represent many of your constituents. Come back to the middle.

KOIN: Walden gets tough questions at The Dalles town hall

Orchardist Ian Chandler, who is a Republican himself, said he wants the congressman to protect the area’s immigrant population.

Republican Rep. Tom McClintock faced jeers, boos and shouts of “do your job” at a town hall meeting in his California district Saturday, but one thing the crowd liked was his stance on Syria — precisely because he criticized President Donald Trump’s decision to strike an air base in that country on Thursday.

MoveOn members are also applauding Senate Democrats for standing united and refusing to normalize Trump’s Supreme Court nominee, and reminding them that they must continue to stand united and use every available tool to block Trump’s toxic agenda that would bankrupt our country and divide our community for the benefit of billionaires and corporations.

“The energy from February recess that derailed TrumpCare has not abated,” said Katherine Werner, MoveOn.org Field Campaign Manager. “Republicans and Democrats alike continue to be held accountable to their constituents. Trump remains under investigation, and Congress has broken decades-old rules to push through Trump’s dangerous agenda. Now is not the time for our elected officials to capitulate to Trump—now is the time for a full-throated independent investigation into Trump’s Administration’s ties with Russia to interfere in the 2016 election, and now is the time to block Trump’s dangerous, unconstitutional agenda and illegal escalation of war in the Middle East.”