MoveOn: “The voices of responsible gun owners need to be heard to help challenge the myth that the NRA speaks for them.”

More than 21,151 members of MoveOn.org who are also gun-owning citizens launched an effort this week to push for common-sense gun control measures, stating they do not feel represented by the National Rifle Association (NRA) and are compelled to act to curb the epidemic of daily gun violence and mass shootings.

The formation of the initiative comes the same day as President Obama visits Roseburg, Oregon, the site of a recent mass shooting at Umpqua Community College that marked the 143rd school shooting since 2013. On Friday morning, that number increased again after shootings on the campuses of Northern Arizona University and Texas Southern University. 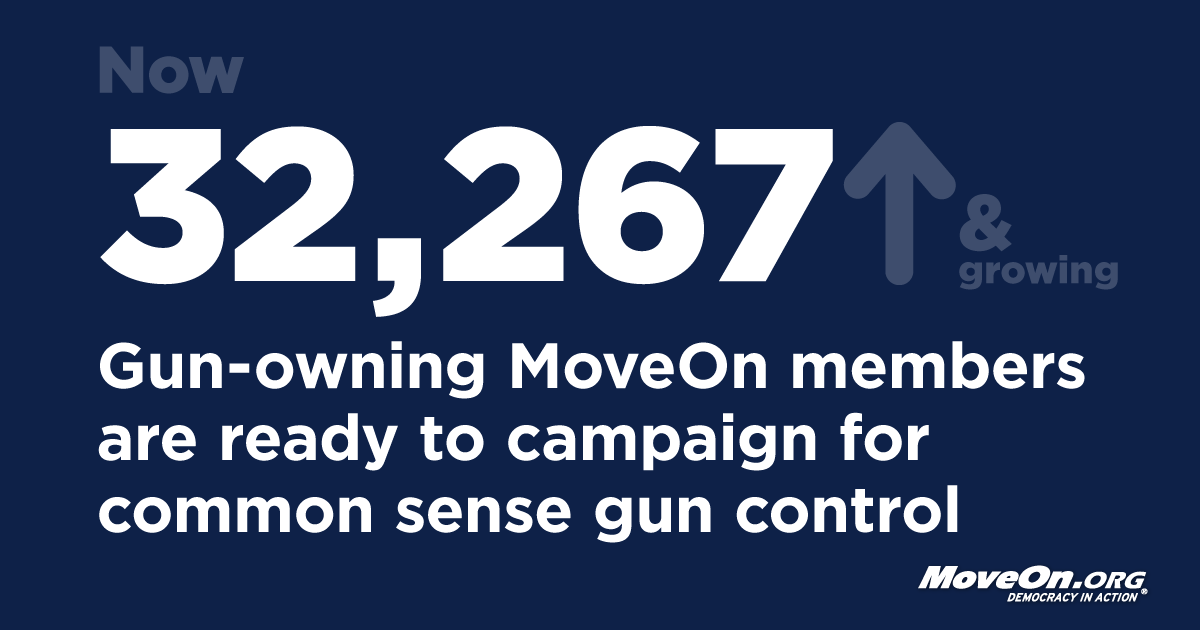 Here’s what some gun-owning MoveOn members had to say in joining the effort:

“My father was an NRA member and instructor, so I am aware of what the NRA used to be. Now it is a tool for gun manufacturers, not the people. Guns need to be regulated, and regulations enforced. I live an hour away from Roseburg where the latest killing spree happened.” –Valerie B., Oregon

“The statistics are clear: Those countries and U.S. states with stricter gun controls have fewer homicides. I used to belong to the NRA before it was taken over by shills for firearms manufacturers. Assault-style weapons with high capacity magazines have no legitimate sporting use. I have to carry a [driver’s license] and my vehicles must be licensed. I have no objection whatsoever to taking a firearms competency test and having my firearms registered.” –Henry C., Oregon

“I am former law enforcement and am well trained in weapons. Too many irresponsible people have easy access to far too many guns.” –Roger H., Oregon

“I’ve been a hunter since I was a boy — I was taught to respect the dangerous aspects of firearms and that to possess one was a responsibility and a privilege. I think no one should be allowed to purchase and own any kind of gun without proving that they are responsible and will use it safely.” –Thomas C., Connecticut

“The real threat to our freedom is the inability of our elected officials to embrace common sense gun controls to protect the public.” –Jenny E., Connecticut

“Guns are not toys and should be treated and regulated with the reverence they command because they are deadly in the wrong hands.” –Arlene Y., Colorado

MoveOn is launching the campaign to help push for gun control measures, including those President Obama can take through executive action as well as high-impact reforms that Congress can and should pass.

“The NRA does not speak for the majority of gun-owning Americans and thousands of MoveOn members are ready to stand alongside our allies and urge President Obama and members of Congress to come together on this issue and pass meaningful, common-sense gun control measures,” said Jo Comerford, campaign director for MoveOn.org Civic Action. “It’s crucial that we organize and elevate the voices of responsible gun owners to wrest control of this debate from the NRA. It’s long past time that Congress start feeling accountable more to the majority of Americans who support gun control instead of deep-pocketed NRA lobbyists. Every day that passes without such measures in place means we risk more mass shootings like today in Arizona and Texas and more needless gun-related deaths.”

Recently, Sen. Dick Durbin (D-IL) said the main obstacle to passing sensible gun control policies today is the NRA’s “death grip” on Congress and state legislatures. Between 2005 and 2013, the gun industry funneled between $20 million and $52.6 million into the NRA’s sponsorship program, Bloomberg reports.

A MoveOn petition started by Shannon Watts of Everytown for Gun Safety in the aftermath of the Roseburg shooting urging President Obama to take key actions to curb gun violence has more than 30,000 signatures. Nationwide, hundreds of members from Montana to Arizona have started similar petitions calling for their representatives to enact real gun control measures.

Rep. Donna Edwards (D-MD) also has a MoveOn petition calling on her colleagues in Congress to “come to grips with the realization that stemming the massive flow of illegal and legal guns into our cities is a fight for the lives of our mothers, fathers, sons and daughters.”