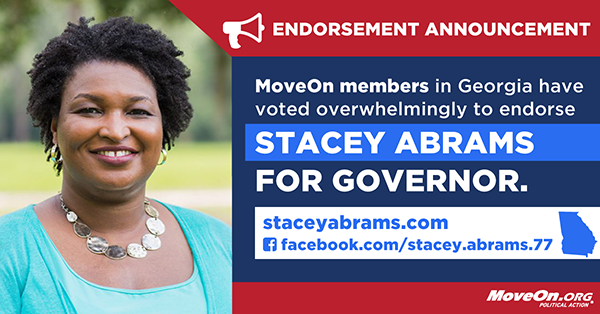 Abrams is the first woman to lead either party in the Georgia General Assembly and the first African American to lead in the House of Representatives. If elected, she would become the first female African American governor in the United States. The election for governor of Georgia will be held on November 6, 2018.

Here’s what MoveOn members from Georgia had to say about Stacey Abrams:

“I believe it’s time for Georgia to take a different approach in improving the lives of everyone with new and fresh ideas. The old tried and tested doesn’t work anymore and we need to get past the old outdated way of doing things. I am all for a free college education for all who want it and I am for reducing our homeless problems here in Georgia.” -David T., Atlanta

“I would be thrilled to have the chance to vote for Abrams for governor, someone paying attention to the issues that matter to the vast majority of Georgians and in touch with the lives of working people. As a Georgia native, I think she could bring exactly what we need to the governor’s office and help revitalize this state for both the people and businesses of Georgia.” – Maria C., Snellville

“Stacey Abrams is real! She connects with people from a sense of being a human being with basic human needs to be met, respected and valued. She is energetic and gets things done- not just talk and puff, puff! She’s grounded from her upbringing of the South! She is informed and engaging. Most importantly Stacey is trustworthy & has a well-developed healthy character! I am excited about her candidacy and I plan to work as hard as I can to get her elected.” -Ernestine C., Avondale Estates

“MoveOn.org and our 125,000 Georgia members are proud to endorse Stacey Abrams for governor of Georgia. Stacey’s campaign is channeling an inclusive populism that sees racial justice, economic justice, climate justice, and social justice as complementary—not contradictory,” said Ilya Sheyman, Executive Director of MoveOn.org Political Action. “She is running on a bold agenda that includes debt-free four-year college, expansion of universal pre-K, expanding Medicaid to 500,000 Georgians, criminal justice reform, a bold jobs plan, and more. She’ll be a fantastic governor for Georgia and her vision is the type of future we should be envisioning nationwide.

“The election for Georgia’s governor, and other races like it across the country in 2018, are going to be won by candidates who can motivate and inspire progressive voters; Stacey Abrams is one of those candidates.”