For Paul Chapman, Jr., Medicaid is a matter of life and death. The Dresden, Maine, resident needs his state’s version of Medicaid, known as MaineCare, in order to be able to afford the medications that keep his body from rejecting a recent heart transplant. Paul signed a petition to expand Medicaid started by Portland, Maine, social worker Jennifer Lunden, and noted, “Without the help from MaineCare, in essence I will be put to death.”

Jennifer created her petition on MoveOn.org in December 2012. “At the end of 2012, [Maine’s governor] was trying to slash the DHHS budget by $220 million and take 65,000 low-income and disabled Mainers off of MaineCare,” she explains to MoveOn. “A lot of people were really afraid of the impact that would have on Mainers. I felt really helpless,” she says. “And then one day I remembered the petitions that other people had started, and I realized that was something I could do.” 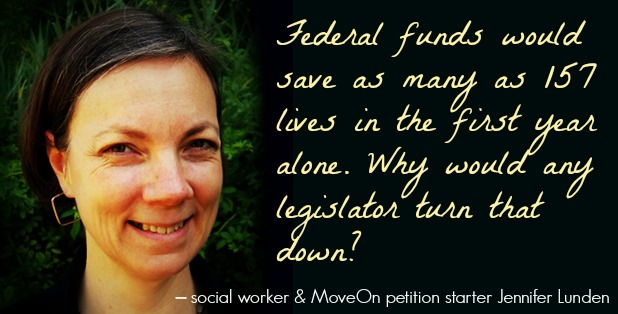 So she started her petition, which immediately resonated with Mainers. “I got almost 10,000 signatures. It was exciting, and I felt like I was able to do something,” she says. Then Lunden went to the State House and hand-delivered the petition to Rep. Patrick Flood, the Chair of the Appropriations Committee, and shared the signers’ concerns. “I felt like the petition made an impact. They didn’t make as many cuts as the governor wanted, but they still made too many. And we’re still dealing with that,” she says.

Her activism continues beyond the petition. She’s stayed very active, keeping petition signers informed about what they can do and writing an op-ed about the plight of Mainers who reached out to her — including Chapman. And now it looks like Maine has a second chance to expand Medicaid.

Lunden sprung into action last week and started a new petition, titled “Health Insurance for 69,500 Uninsured Mainers? Yes, Please!” It explains, “[A]ccepting federal funds would save as many as 157 lives in the first year alone, create 4,400 new jobs, and generate at least $20 million in state and local taxes. Why would any legislator turn that money down?” Why indeed? Here’s hoping Maine doesn’t miss out on its second chance to provide heath care to all of its residents.

Linda Cook, a digital media developer for a major publishing company, is another MoveOn member fighting for Medicaid expansion, this time in Florida. “There was no petition regarding the Medicaid extension in Florida, and our legislators basically just ignored the needs of Floridians, so I thought, ‘Well, shoot. I’ll just do it myself.’” And she did!

The issue was very personal for her. Cook had recently been laid off when she started the petition and was worried about medical care. “Thank god I’m now working and have insurance, so I don’t have to worry about that anymore. But there are a lot of people in this state who are still in bad shape when it comes to healthcare,” she says.

Her petition has garnered a whopping 24,300 signatures to date — not bad for her first petition ever! “I promoted it every way I could,” she says when asked about her petition’s success. “I used Facebook, I used Twitter, and I took advantage of the email capability — you can email all of your signers and ask them to share as well.” It didn’t hurt that a reporter for The Guardian got wind of the petition as well.

She says the response to her petition has been overwhelmingly positive. “You reach a lot of people. And the emails that I got — I was amazed. People told me their stories and thanked me for starting this petition…I expected mostly [to hear from] young people, but the emails I got were mostly from elderly people who were disabled. I just thought that was heart-wrenching.”

You can view these campaigns and others like them here: http://www.moveon.org/medicaid/