MoveOn exclusive: Robert Reich has a message for you 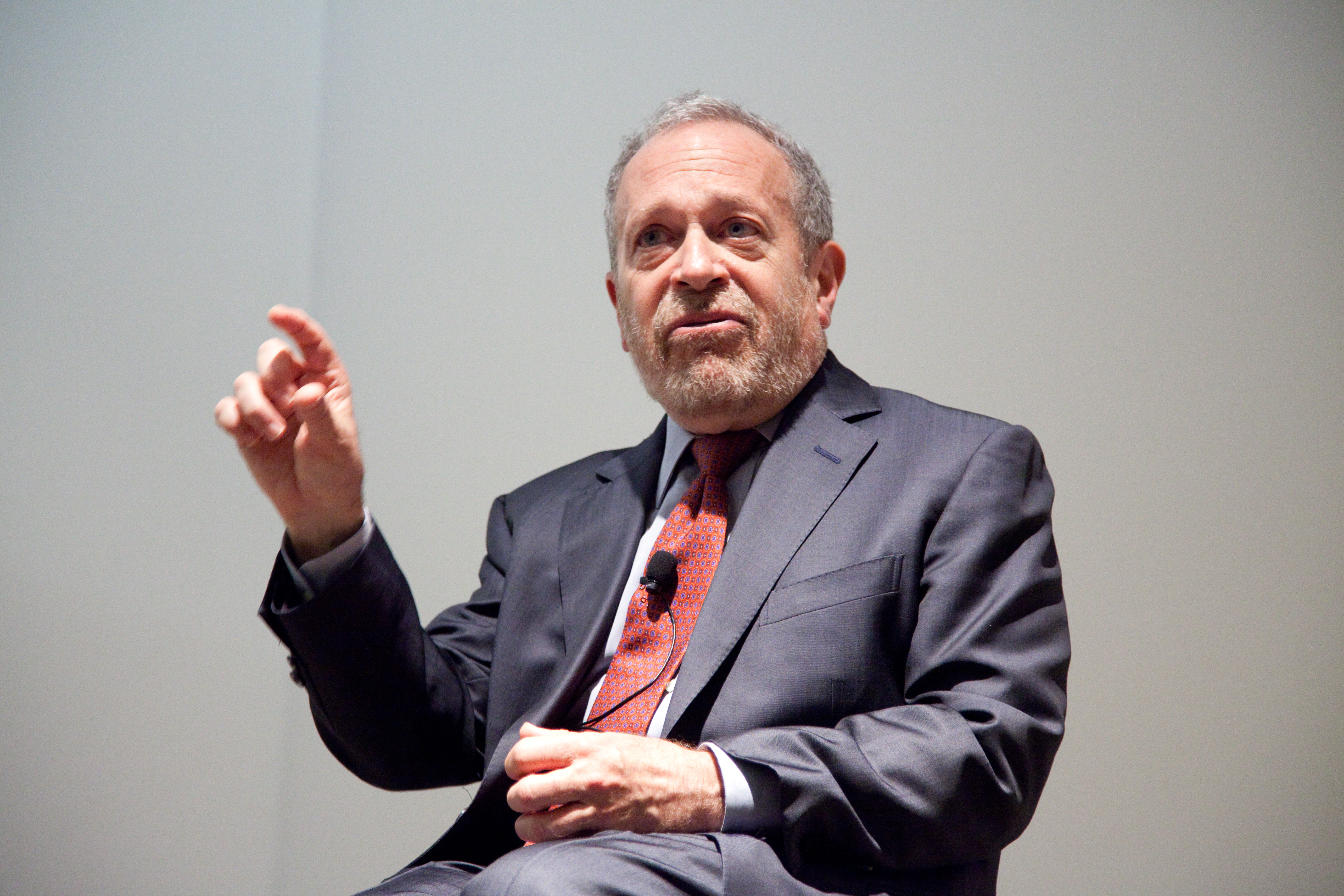 Last week we sat down with Robert Reich, former labor secretary and close ally to MoveOn.org. He discussed a wide range of pressing issues, from presidential politics to banking reform, in an interview exclusively for MoveOn.org members.

MoveOn: Let’s start with the Supreme Court fiasco. Do you see any scenario in which Merrick Garland might get sworn in before the November election?

Robert: It’s possible enough Republican senators who have to face the voters this November and are worried about a potential backlash against Republicans for not allowing a vote on Garland, will put some pressure on McConnell and at least get a hearing. Then if a Democrat wins in November and if the Senate Republican Senate majority is whittled down, I believe Garland would be confirmed.

MoveOn: If you had a crystal ball in front of you and looked in it, do you feel that is likely, unlikely, too early to tell?

Robert: It’s just too early to tell. The President does have another option. He could tell Republicans he’ll treat their silence on Garland as a waiver of their right under the Constitution to advise and consent. If he doesn’t hear back from them one way or another within 90 days, he’ll appoint Garland. Presumably the Republican Senate will then sue the President and the issue would go to the Supreme Court. Garland would recuse himself but I think it likely the court would agree with the president because the court has held that a failure to exercise a Constitutional right is a waiver of that right.

MoveOn: I wonder if this will be like the war powers resolution where the Supreme Court just says it is above our pay grade.

Robert: The Supreme Court has entered the fray between Congress and the President before. But as a practical matter, I don’t think President Obama would do something like this, although I personally believe he should.

MoveOn: That’s really interesting. Speaking of politics I am going to switch to the election. You publicly endorsed Bernie Sanders for president but you’ve also said on a couple of occasions you will work your heart out to elect Hillary Clinton if she becomes the nominee. As you know, not everyone shares that view and some Sanders supporters have said they won’t support or vote for Hillary if she is nominated. Is there anything you have to say to those folks?

Robert: If she is nominated, a failure to back her makes a President Trump or a President Cruz or President Ryan more likely. No matter what people feel about Hillary Clinton, she is 1,000 times better than those three. I hope people consider the alternative.

MoveOn: I want to talk a little bit about banks and Wall Street. It is certainly, and I am no economist but it seems like not enough has happened since the big meltdown of 2007-2008 to prevent it from happening again. Are we on course for another meltdown and is there anything we can do to stop that?

Robert: Just yesterday the 5 biggest banks failed a test that was set up for them under the Dodd-Frank reform act, to come up with plans for winding down their operations in the event of a financial crisis. This is just the latest evidence that the biggest banks are too big to fail. They are much larger than they were in 2008 when they got bailed out. The 5 largest Wall Street banks have almost 44 percent of total U.S. banking assets. In 2008, they had about 32 percent when they were deemed too big to fail.

In addition, Dodd-Frank has been whittled back by the lobbyists and lawyers of the big banks who have gone into the regulatory processes and got all kinds of exemptions and loopholes that reduce the effectiveness of Dodd-Frank. The bottom line is that the biggest banks simply cannot be regulated. They have far too much political power and firepower. The only answer is to bust them up. It’s not just Bernie Sanders who is advocating this. The new president of the Federal Reserve Board of Minneapolis, for example, is calling for the biggest banks to be busted up and he knows what he is talking about. He is a Republican and former executive of Goldman Sachs. The former head of the Dallas Federal Reserve Board also called for breaking up the big banks. Sandy Weill, who was the head of Citigroup is calling for breakup of the biggest banks. This recommendation transcends political parties or the left versus the right. It is just common sense.

MoveOn: Does existing antitrust law provide enough oomph for the Justice Department or someone to go after them, or would this be a whole new round of legislation?

Robert: It would be easiest if there were new legislation, but realistically that is unlikely to happen given the banks’ political power. Yet Dodd-Frank does give the president authority to initiate a process that could very well end up in busting up the big banks. Dodd-Frank sets up a financial stability oversight council. The president appoints all of the members of the council and the council is headed by tthe Secretary of the Treasury. That council can make recommendations to the Board of Governors of the Fed to wind down the operations and essentially bust up any big bank.

MoveOn: So if a MoveOn member came to you and said ‘what should I do,’ it would be to support busting up these banks.

Robert: Yes, that is the most prudent course. Now some people say “but what about American competitiveness. Aren’t the big banks necessary to maintain our financial competitiveness?”

The answer there is that the biggest Wall Street banks are global entities. They don’t care about the United States. They have branches all over the world. They are operating everywhere and so there is really no such thing as American competitiveness when it comes to the financial sector. Other people worry that breaking up the big banks will result in a loss of jobs for bank tellers and for all sorts of other people. That is not the case either, because by busting up the big banks all we’d be doing is creating a multiple banks in the place of a giant bank. It is just like when the anti-trust authorities busted up Ma Bell and created regional Bells. There weren’t fewer jobs. In fact if anything there were more jobs, but you reduce the economic and political power of that giant, single AT&T.

Robert: Get big money out of politics. That is the most important first step. How do we accomplish this? Obviously we need to reverse Citizens United. But even without an immediate reversal of Citizens United, there are many steps we can take: First, strengthen the rules against the revolving door between government and Wall Street and business.

Secondly, require full disclosure of where all campaign dollars come from.

Thirdly, provide public financing of elections such as several states are doing, and fourthly, get rid of so-called dark money. Again, a loophole created by organizations pretending to be so-called “social welfare” organizations. They are really nothing but political front groups.

MoveOn: I have 2 more questions. One is can you offer any kind of advice or encouragement for our committed Move On members?

Robert: I can certainly offer a lot of encouragement. We are on the winning side — and the correct side — of history. Right now, the American political economy is trending toward widening inequality and a democracy that is dysfunctional because almost all the power is in the hands of a relatively few giant corporations, Wall Street and billionaires. This is not a sustainable direction.

The populist revolt we are seeing — both on the right in terms of support for an authoritarian bigot, and on the left in terms of support for a “political revolutionary” — is symptomatic of the public’s disdain for politics as usual. Regardless of what happens in November, there’s a very high likelihood that over the next few years we will have fundamental political change. The real question is whether that change is constructive — toward a wider circle of prosperity and a democracy that is more responsive to the people — or is destructive in terms of aggravating racial tensions and xenophobia. That is really the fundamental choice ahead.

I am encouraged because I think more people are recognizing that is the choice. More Americans are getting involved in politics. Many young people have chosen to join Bernie Sanders’ bandwagon. Those young people are going to be at the core of a new political movement to reclaim our democracy and economy. We also can look to American history and see that every 50 or 60 years there is a populist and typically progressive shift that reduces the excesses of capitalism and enlarges democracy. That happened in the 1830s. It happened between 1901 and 1916 in the so-called Progressive Era. It happened during the New Deal, and it happened in the late 1960s. I think we’re ready for the 5th such progressive shift.

My advice for Move On members is to avoid cynicism. Cynicism can lead to paralysis and undermine all public effort. By virtue of being MoveOn members, people already have proven they’re not cynics. But it is not enough simply to support MoveOn. They need to fight cynicism around them, and take an active role in our democracy. Direct engagement, organizing, mobilizing and energizing the electorate at the local and state levels is vitally important. Becoming part of an active political movement to generate our democracy and ensure that the economy is working for the many rather than the few is essential.

MoveOn: I have to say that was the most encouraging thing I have heard in awhile. My last question. I love those videos you are doing with MoveOn. Are you the one who is really drawing the pictures?

Robert: Yes. I have been drawing since I was a small child. It is hardly what anybody should define as art, but I enjoy it and I hope that it enhances the value of the videos in terms of communicating information.

MoveOn: It just makes us all wonder if there is anything you cannot do.

MoveOn: Thank you so much for your time. This was wonderful.