Members of MoveOn.org Political Action in Illinois and Ohio have voted decisively to endorse Senate candidates and progressive champions Rep. Tammy Duckworth and Ted Strickland, respectively, on the heels of their strong support for the historic nuclear agreement with Iran.

MoveOn has 412,877 members in Illinois and 94% of votes cast were in favor of backing Duckworth. There are 278,098 MoveOn members in Ohio and 79% of votes cast there were in support of endorsing Strickland. They join Russ Feingold on MoveOn’s slate of Senate endorsements; MoveOn members in Wisconsin voted overwhelmingly earlier this year to back Feingold, who also stood up in supporting diplomacy and backing the Iran deal.

“At a crucial juncture in our nation’s approach toward foreign policy, and on the heels of one of the most significant diplomatic agreements in recent history, MoveOn members nationwide are rallying around candidates and elected officials who stood strong in the face of well-funded pro-war voices,” said Ilya Sheyman, executive director of MoveOn.org Political Action. “These Senate endorsements kick off a new phase in MoveOn members’ work to support the Democrats who unflinchingly backed this deal and hold accountable those who didn’t, and take back control of the Senate from right-wing Republicans.”

Rep. Duckworth knows the costs of war more than most, having served in Iraq as a helicopter pilot before losing both of her legs in combat. In announcing her support for diplomacy with Iran last month, she wrote: “American diplomacy in cooperation with the efforts of our international partners, brought us this opportunity. To reject those efforts and abandon multi-lateral diplomacy would be irresponsible and ignore the lessons of the Iraq War.”

As a member of Congress in 2002, Ted Strickland cast a courageous vote against invading Iraq. Last month, Strickland again stood strong for peace by supporting diplomacy with Iran. 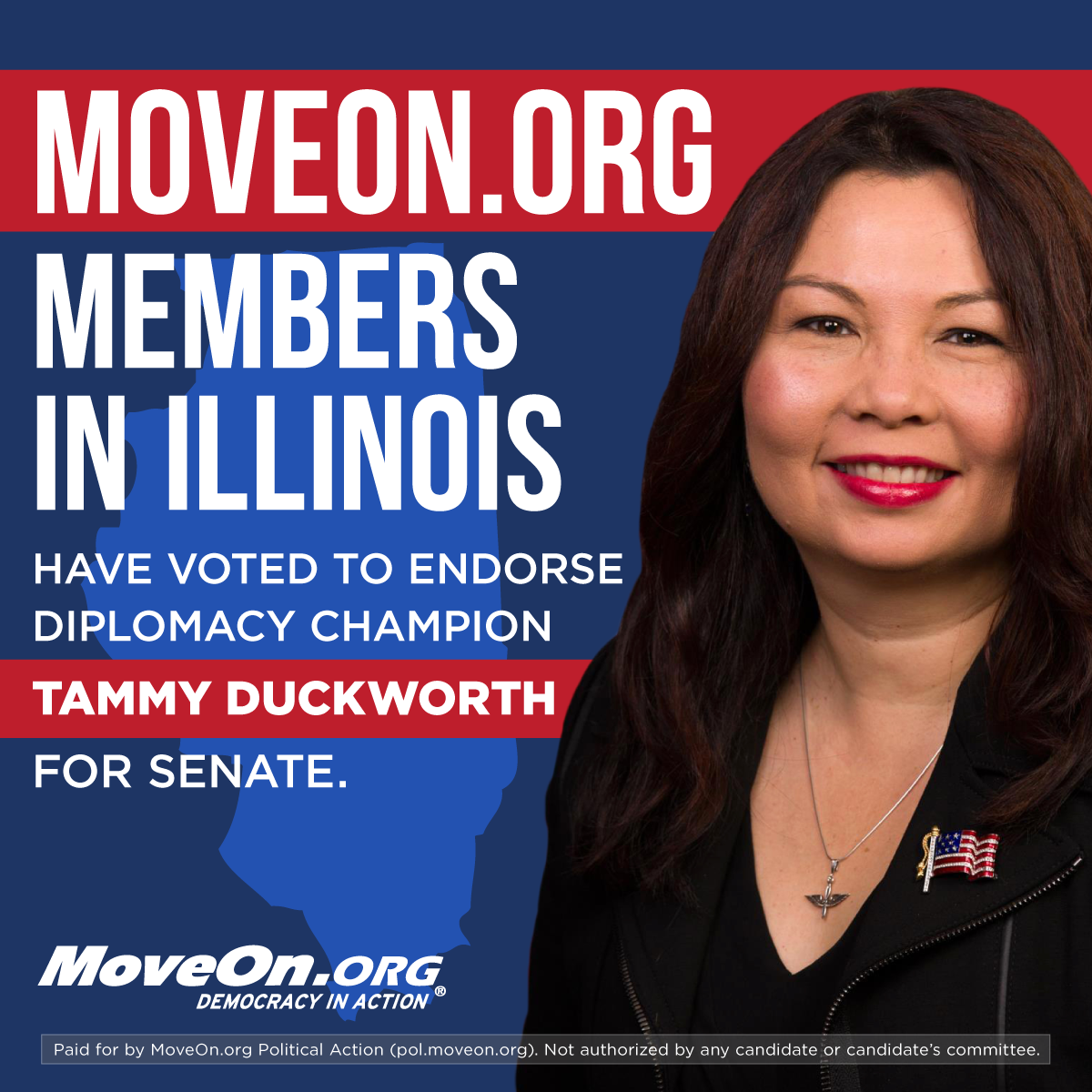 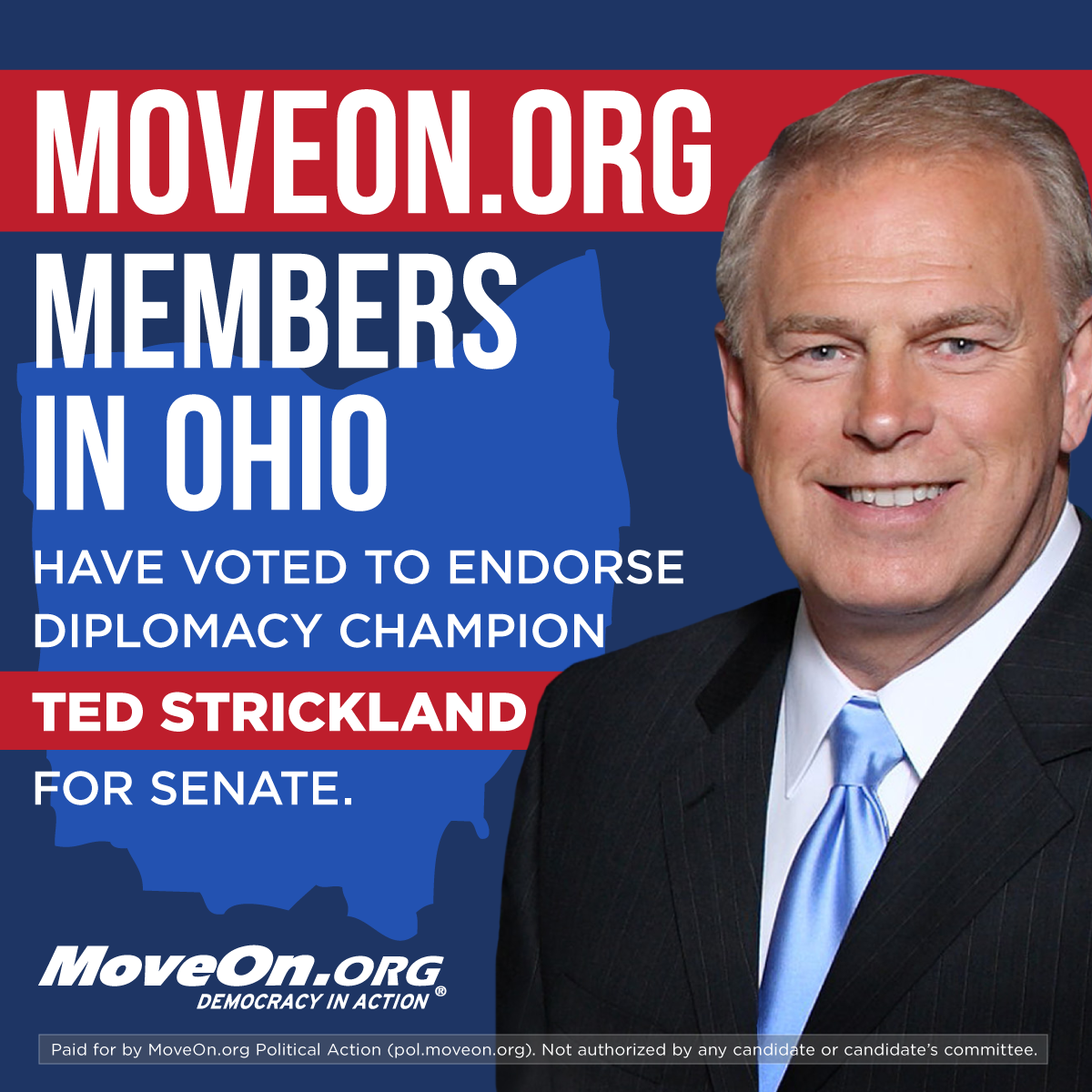 Here’s what some MoveOn members had to say in endorsing Duckworth and Strickland:

“Tammy Duckworth has been a prominent voice and vote in the House on behalf of women, seniors, minority groups, children, veterans, the middle class, and the poor. Illinoisans need Tammy Duckworth’s energy and vitality in the U.S. Senate, and she has my endorsement and support.” —Aimee C., Grayslake, IL

“Congresswoman Duckworth is an amazing woman who happens to also be an Iraq veteran. She is a tireless advocate for veterans, cutting waste and support for women’s rights. She is brilliant, tenacious and practical a rare combination in Washington DC.” —Marsia G, Glen Carbon, IL

“Ted Strickland was one of the few who voted against the Iraq War. In Congress, he was a champion for health care reform and advancing our nation’s family leave policies. As Governor, he ushered in a new age of renewable energy industries and energy efficiency standards while focusing on investing and improving public education and college affordability.” —Brian H, Hamilton, OH

MoveOn.org Political Action represents the collective will of MoveOn’s more than 8 million members at the ballot box by helping to elect progressive candidates.