CINCINNATI — Cincinnati members of MoveOn.org Political Action have voted overwhelmly to endorse Yvette Simpson for Mayor.  In the race for Mayor, Simpson won the endorsement of 82% of votes cast by MoveOn.org’s more than 9,000 members in the city.

The election for mayor of Cincinnati will be held on November 7, 2017, where Simpson will face incumbent John Cranley.

Here’s what MoveOn members from Cincinnati had to say about Yvette Simpson:

“She is committed to making sure that the economic revitalization of the city is reaching and benefitting all its citizens, not just those who are already economically advantaged.” —Jonathan M.

“Yvette represents the values of MoveOn, more so than John Cranley. Her work to engage youth, support and promote public transit, and ensure that all citizens benefit from city investments is in direct contrast to many positions that the current mayor has taken.” —Jeanne G.

“She is clearly the best next step for our city. Simpson has a bold forward plan to bridge the gaps in how neighborhoods have been cared for. She clearly will be a “for the people” Mayor. We don’t want same old same old politics.” —Cynthia T.

“MoveOn.org Political Action is proud to endorse Yvette Simpson for mayor of Cincinnati. Throughout her career, Simpson has proven her dedication to progressive values time and again. Her candidacy embodies the notion that Cincinnati should be a city for all residents, in every neighborhood, regardless of their socioeconomic status. In turbulent political times like these, progressive leaders are more crucial than ever, especially at the local level, which is why we support candidates like Yvette Simpson,” said Matt Blizek, election mobilization director for MoveOn.org Political Action. “We believe in the power of community leaders like Yvette Simpson and are eager offer our unwavering support .”

“We are honored and excited to have the endorsement of MoveOn.org Political Action,” said Yvette Simpson. “MoveOn.org has been a consistent and strong voice for progressive values and change across the country, working tirelessly to change the lives of our citizens.” 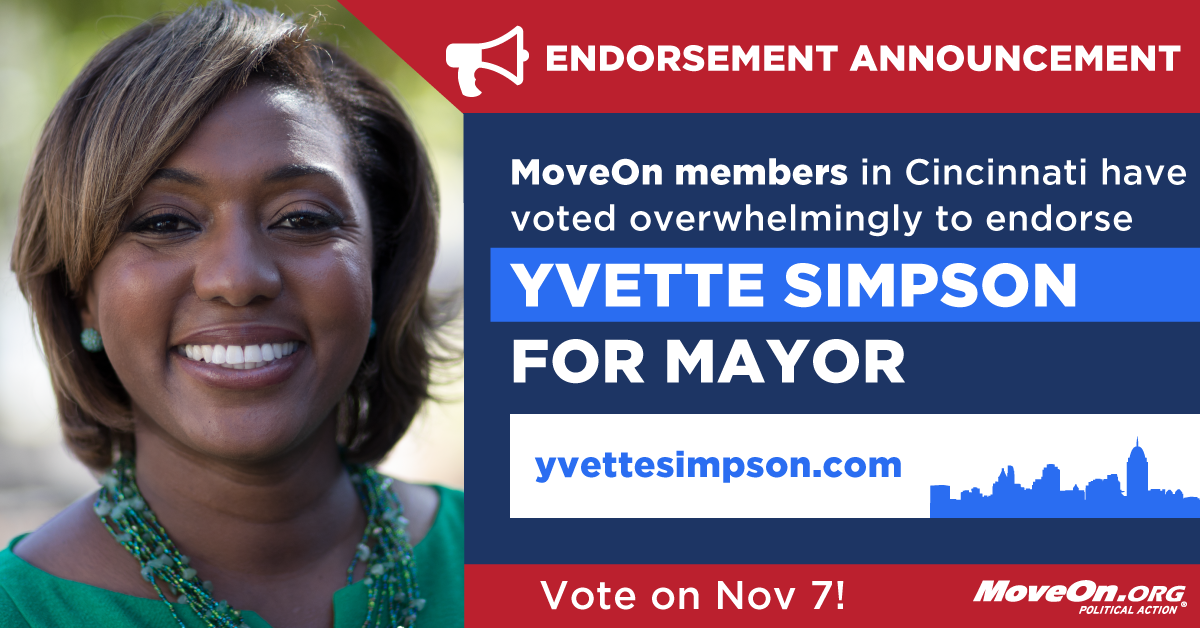