“The people of our multiracial democracy have spoken, loudly and clearly. They have deposed a would-be dictator and voted for government action in the face of crisis.

“We congratulate President-elect Joe Biden and Vice President-elect Kamala Harris on their decisive victory. Even as officials continue to count the final outstanding votes, the outcome of the presidential election is clear. People showed up in unprecedented and awe-inspiring numbers, continuing the vast reawakening of American democracy that began following the 2016 election, and they voted overwhelmingly for change.

“I am immensely proud of and deeply grateful for the millions of MoveOn members who worked so hard over the past four years and who powered our largest-ever voter mobilization campaign over the past few months. Together, we overcame a flood of voter suppression, misinformation, intimidation, and the unlawful use of government resources for political campaigning. Together, we turned the tide of American politics and created a significant opportunity for progress. But this is no time for complacency or to rest on laurels. There is much work to be done. MoveOn members in Georgia will be all-in to use our grassroots power in that state’s Senate runoffs. And then, with new leadership being sworn in in January, we must dedicate ourselves to making good on the mandate that a broad, multi-racial, multi-generational coalition of voters provided.

“Our country faces multiple crises on a scale we have not faced since the Great Depression and World War II: health and economic crises resulting from mismanagement of the pandemic; a climate crisis fueled by accommodation to fossil fuel lobbyists and denial of science; a crisis of racial injustice that has been part of the story of this this country for far too long and can no longer be tolerated; a crisis of democracy, with Americans divided, the right to vote under attack, and trust in institutions faltering. The election’s results and the record participation of the American people in the democratic process show a clear demand for change.

“Joe Biden, Kamala Harris, and Democrats in Congress have set forth plans on each of these fronts. We will have their backs as they advance their agenda and will hold them accountable and demand better when they fall short. Now is not the time for timidity or half-measures. Now is the time for those we elected to deliver on behalf of the people, with bold action commensurate with the scale of the challenges we face. That is how we will restore trust in government, and how we will ensure continued widespread participation. We know the stakes are high, and we are ready to meet the moment. We will continue to fight, together, for an America that works for all of its people and country in which everyone can thrive.” 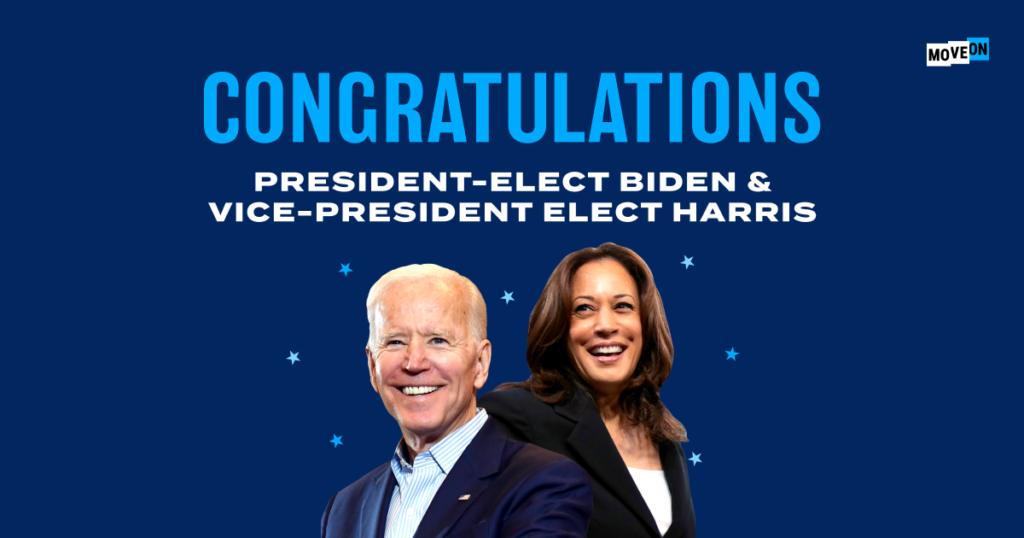